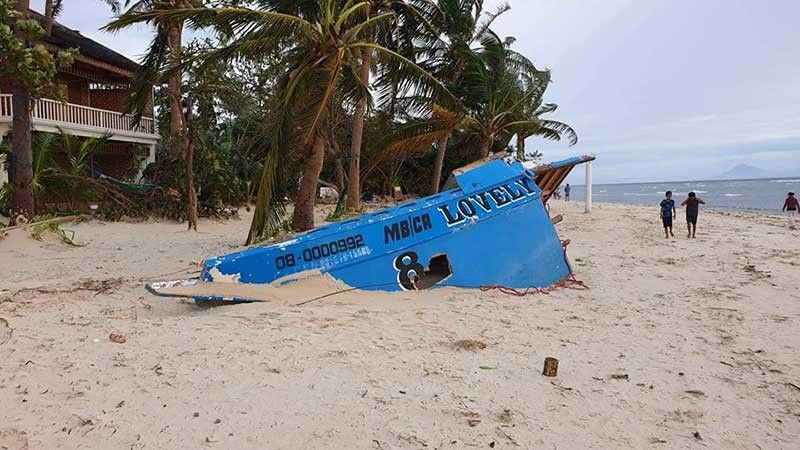 CEBU. A boat on Malapascua Island in Daanbantayan, Cebu was destroyed by Typhoon Ursula. (Photo from Philippine Coast Guard)

OVER P1 billion worth of crops and fisheries products were lost while the casualty count continued to increase as damage assessment reports on the impact of Typhoon Ursula (international name Phanfone) reached the national disaster response agency.

In its 6 a.m., December 27, 2019 update, the National Disaster Risk Reduction and Management Council (NDRRMC) said the number of fatalities has gone up to 28.

The Department of Agriculture (DA), meanwhile, said that as of 7 p.m., December 26, 2019, P571. 58 million worth of agriculture products and P569 million worth of fisheries were damaged in Mimaropa (Mindoro, Marinduque, Romblon and Palawan) as well as in the three Visayas regions - Eastern, Western and Central Visayas.

Over 12,000 families were affected by the typhoon in the Visayas region, according to the NDRRMC.

The provinces of Leyte, Eastern Samar and Capiz, and the municipalities of San Jose in Occidental Mindoro and Kalibo in Aklan were placed under a state of calamity to allow local governments to dip into their calamity funds and assist the affected population.

Typhoon Ursula left a path of destruction as it barreled through central Philippines on December 24 and 25, 2019, affecting the same areas devastated by Super Typhoon Yolanda (Haiyan) in November 2013.

According to the Philippine Atmospheric, Geophysical and Astronomical Services Administration (Pagasa), the typhoon was located 335 kilometers west of Subic, Zambales as of 3 a.m. Friday, December 27.

It has weakened and is now packing winds of 120 kilometers per hour (kph) near the center with gustiness of up to 150 kph. It is moving towards the northwest at a slower speed of 10 kph. (SunStar Philippines)