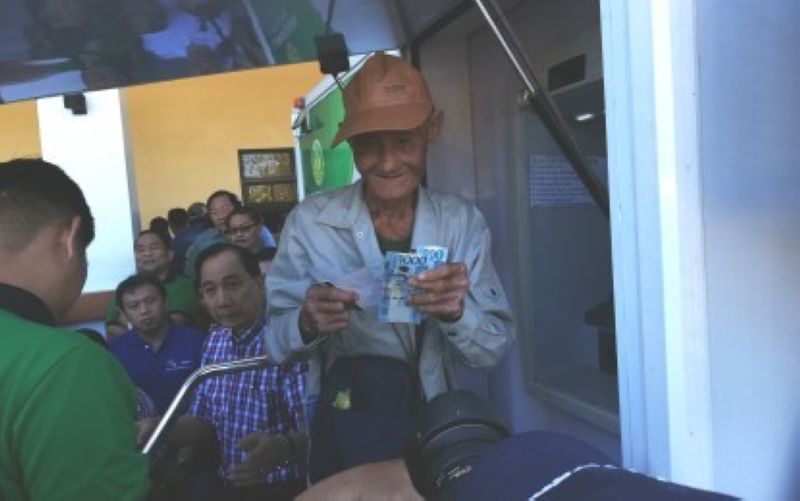 PANGASINAN. An elderly rice farmer (right) smiles as he withdraws the P5,000 unconditional cash transfer from the national government through the Department of Agriculture (DA) on Monday, December 23, as DA Secretary William Dar (middle) looks on. The Rice Farmers Financial Assistance Program was launched in Pangasinan with 87,175 qualified rice farmer-beneficiaries. (PNA)

SOME 87,175 qualified rice farmers in Pangasinan will be given P5,000 cash aid under the Rice Farmer Financial Assistance (RFFA) Program of the Department of Agriculture (DA) starting Monday, December 23.

The launching of the program was held in Lingayen, Pangasinan with an initial 500 rice farmers from Mangatarem town who received their cards containing the cash aid from the Landbank of the Philippines.

DA Secretary William Dar said the program is part of the assistance of the national government for rice farmers affected by the low price of ‘palay’.

“This is for selected rice farmers who are tilling 0.5 hectare to two hectares of land in all 33 provinces in the country who were assessed to be needing assistance,” he said in an interview on the sidelines of the launch.

Dar said RFFA is an unconditional cash transfer (UCT) while other financial aids, such as loan programs, are available for farmers,

Its distribution to all qualified rice farmers in Pangasinan will be until March 2020.

Dar said the national government has allotted P3 billion in 2019 for the nationwide program, and another P3 billion next year.

He added the DA will also incentivize the local government units helping the rice farmers cope up with the low prices of ‘palay’ in their jurisdiction through assistance or management of palay prices.

Pangasinan Governor Amado Espino III thanked the DA for the program, as he vowed to continue the province’s partnership with DA in supporting the rice farmers in the province.

“It will be a big help to them. We will continue to distribute machineries, among others, through different national government agencies, to the farmers,” Espino said.

Pilahia Resuello, 78, and Felissa Mondala, 49, both said they will use the amount to purchase seedlings and fertilizers for their farmlands.