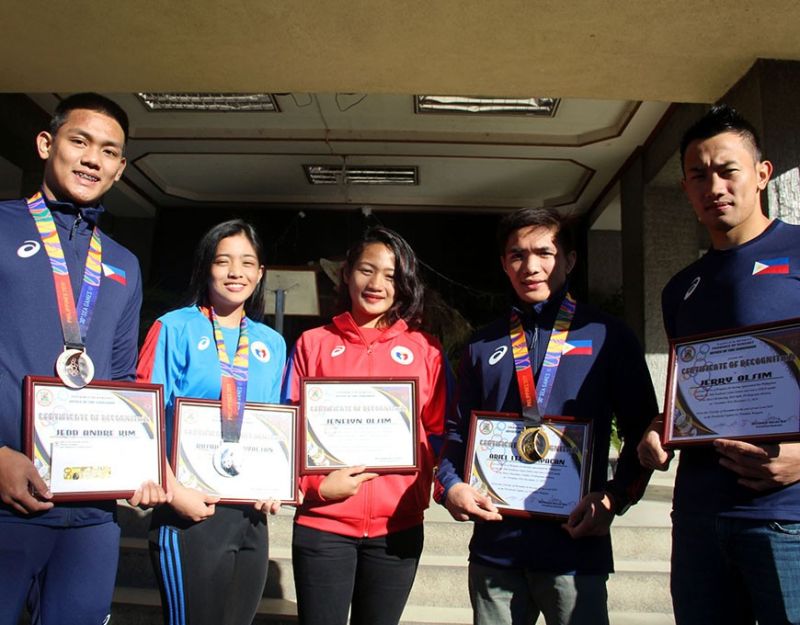 BAGUIO. Contributing to the success of the country during the 30th Southeast Asian Games, Benguet athletes were recognized by the provincial government. Honored were (from left to right) Jedd Andre Kim, Rusha Mae Bayacsan, Jenelyn Olsim, Ariel Lee Lampacan and Jerry Olsim. (Photo by Lauren Alimondo) 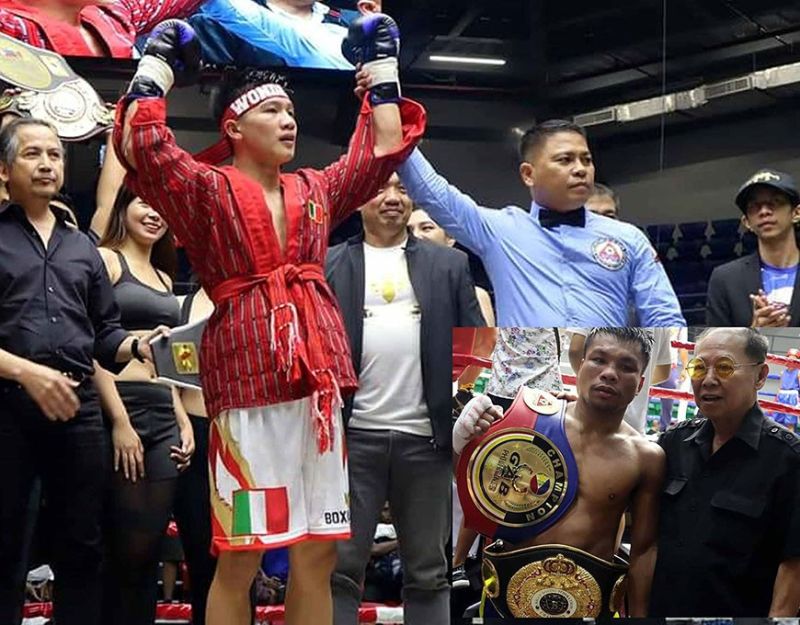 BAGUIO. Ifugao’s Carl Jammes Martin once again made an impact inside the ring after stopping his opponent in the third round to retain his Philippine Boxing Federation bantamweight title while (inset) Carlo Magali won via a split decision over Al Toyogon of Gingoog City to claim the vacant Asian Boxing Federation super featherweight and vacant Philippine super featherweight is joined by boxing patron Naris Singwancha. (Photo by Brico Santig) 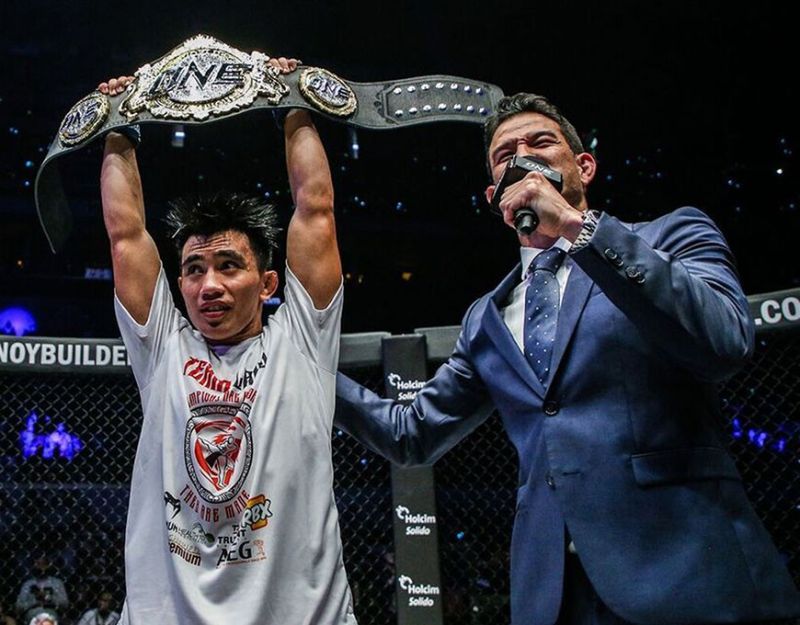 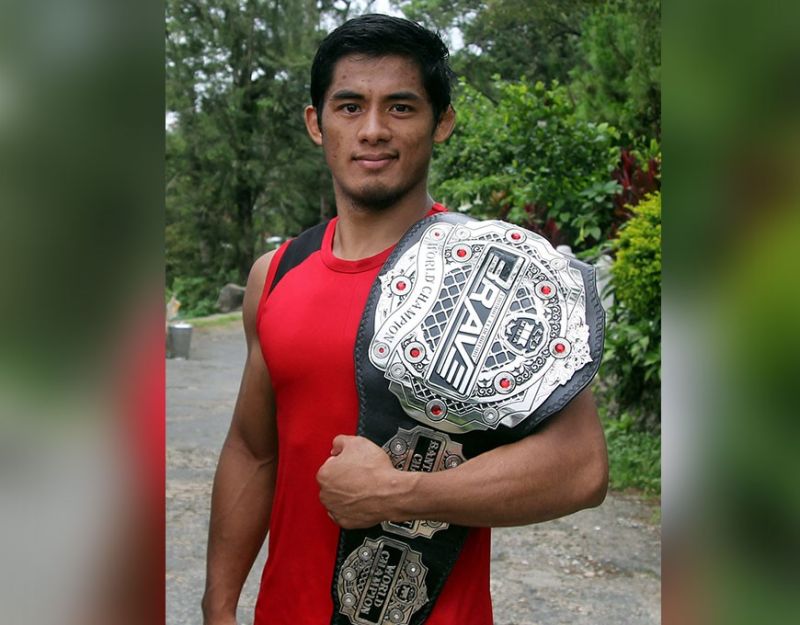 CORDILLERA athletes showed grit and tenacity as they continued to bring honor not only to the region but to the country as well.

Proof to that are the 30 medalists from the region who etched their mark during the 30th Southeast Asian Games hosted by the country.

As 2019 comes to a close, we take a look at this year’s best performance by our athletes, not only in the local scene but also in the international arena.

Nesthy Petecio, who has called Baguio her home in the past 14 years, did not only win gold in the last SEAG but was also crowned a world champion during the AIBA last October.

Divine Wally bagged the gold medal in the 48-kilogram division of wushu sanda despite nursing an injury. She is also a bronze medalist in the World Wushu Championship last October, an event that she also won in 2017.

BAGUIO. Ifugao’s Carl Jammes Martin once again made an impact inside the ring after stopping his opponent in the third round to retain his Philippine Boxing Federation bantamweight title while (inset) Carlo Magali won via a split decision over Al Toyogon of Gingoog City to claim the vacant Asian Boxing Federation super featherweight and vacant Philippine super featherweight is joined by boxing patron Naris Singwancha. (Photo by Brico Santig)

The name to watch out for

The Ifugao boxing sensation is undefeated in 15 bouts with 14 coming by way of knockout.

Martin made his debut in 2016 making short work of Jayar Omac and in 2017 vied for the vacant Philippines Luzon Professional Boxing Association (LuzProBA) Bantam title and defeated Jason Buenaobra via unanimous decision.

The 20-year-old Martin was also impressive in his Manila debut this year, stopping Petchchorchae Kokietgym then racked up to more victories this year to keep his record clean at 15.

But the “Wonderboy” from Ifugao believes he has not yet reached his full potential.

After winning five world titles in 2018, Team Lakay was left with two belts at the close of 2019.

Joshua Pacio first yielded his One Championship world strawweight title against Yosuke Saruta in January with a split decision.

However, Pacio made sure he will reclaim what fully belongs to him when he knocked out Saruta in the fourth round in their rematch in April, erasing all doubts of who won in their first encounter.

In November, Pacio was able to defend the belt against fellow Filipino Rene Catalan with a second round arm triangle choke.

Loman stopped Elias Boudegzdame with a fourth round knockout in his first title defense in the country last April then held on to win via unanimous decision against Ilias Sanoudakis this November to defend his world bantamweight title for the fourth time.

Kevin Belingon, who held the ONE bantamweight world title yielded the belt to Bibiano Fernadez in a controversial decision in March after accidentally landing some punches to the back of his opponent.

Their fourth rematch on October yielded the same result as Fernandez disposed of Belingon in the second round with a rear naked choke.

Folayang would then take on MMA legend Eddie Alvarez but the result he was expecting did not fall into place after he got submitted in the first round.

However, Folayang would then score a win against Tsogookhuu Amarsanaa with a second round technical decision in November.

Geje Eustaquio held the flyweight belt in June 2018 after scoring a split decision against Adriano Moraes.

However, in January 2019, the tides have turned as Moraes reclaimed the belt in third encounter as the Brazillian pulled off a convincing unanimous decision win.

Danny Kingad may have fallen short against another MMA great, Demetrious Johnson, in their flyweight world grand prix finals but he was able to hold his own.

Kingad lost to Johnson in three rounds but proved to the world Team Lakay's grappling and ground game is improving as he held his own against one of MMA’s all-around fighter.

Kingad earlier made it to the world grand prix after stopping another world class grappler in Reece Mclaren.

Not past their primes

Just when everybody’s eyes were glued to the SEA Games, 67–year–old Erlinda Lavandia reminded everyone she still can compete in the highest level after winning a gold in the Kuching, Malaysia Masters Athletics tournament while Christabel Martes won two golds – 10,000 and 5,000 meter runs – and two bronze medals.

The former police officer competed in the women's 65-above category in the javelin event and bagged the top prize after besting athletes from Indonesia and Sri Lanka.

Father and son at the track

Racing is definitely in their genes.

Iñigo Anton added another feather to his cap when he took the overall crown in the 2019 Philippine Autocross Championship Series edging his multi-titled father, Carlos, in the process.

Inigo took early wins in Cavite during the 2nd round and Maycauyan in the 5th round.

Carlos set the pace with a first round win in Novaliches and followed it up with another win in Clark during the 4th round.

After the 5th round win of Iñigo, it was a race between the father and son to the end of the championship which thrilled the crowds at every round swapping fastest times with every run.

Iñigo set the best times during his early runs in the overall class which proved to be crucial as his father Carlos car broke down after his initial runs which were not fast enough to beat the younger Anton.

The younger Anton took the win in the end by a single point over his father (65 to 64) and with it crowned himself as the youngest ever overall Philippine Autocross Champion in the sports 20 year history.

Baguio retained the overall title and took home the P3-million windfall during the Batang Pinoy National Finals in September.

The Summer Capital closed the sporting meet with 61 gold, 48 silver and 63 bronze medals and successfully defended the title it won last year.

Though the number of gold medal haul is fewer compared to last year, Baguio remains the overall champion, with head of delegate and city sports coordinator Gaudencio Gonzales praising the young athletes for a job well done.