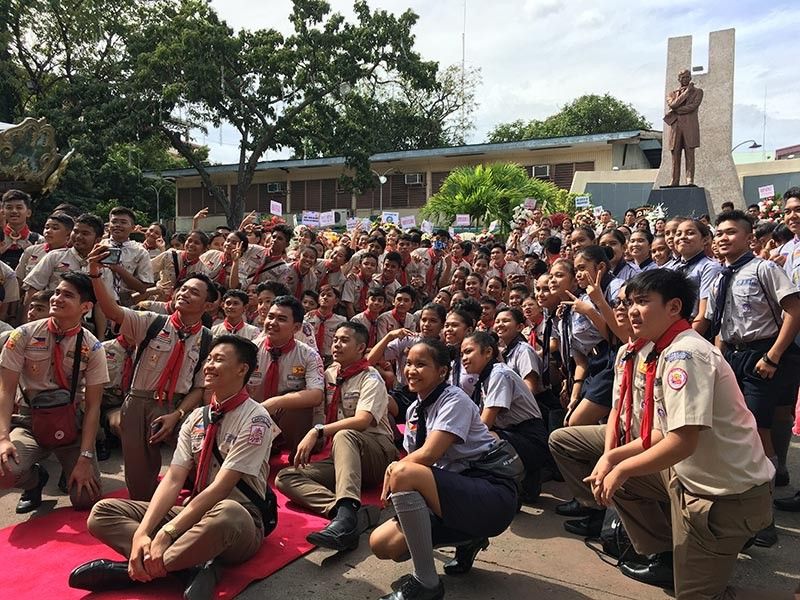 DAVAO. Members of the Boy Scouts and Girl Scouts of the Philippines took a group photo in front of Rizal’s monument after the ceremony for the 123rd anniversary of the martyrdom of Jose P. Rizal, Monday, December 30. (Photo by Roberto A. Gumba Jr.)

This message became the focus of the 123rd death anniversary of the martyrdom of national hero Jose P. Rizal in Davao City, Monday, December 30.

In his keynote speech, Armed Forces of the Philippines Intelligence Service (ISAFP) chief Erwin Bernard Neri said in order to become modern-day Rizals, people must learn to be kind and to be of service to other people.

“Heroism is to be of service to others. It doesn’t matter what your status in life. What is important is you should have the heart to serve others because this is where nationalism starts,” he added.

At the sidelines of the event, Davao City Mayor Sara Duterte-Carpio urged Dabawenyos to acknowledge the contributions of the national hero for the country.

“Let us learn from what he did, from his love to our country. For what he did for our fellowmen, iyahang gialsa ang nasud over and beyond himself,” she said.

Duterte was not able to attend last year’s commemoration.

Rizal, an example for the youth

Meanwhile, Duterte called on the youth to follow the example of Jose Rizal by thinking of the greater good during the commemoration of the 123rd anniversary of the martyrdom of the country’s national hero.

In his Rizal Day message, Duterte recognized how Rizal’s life and legacy have inspired countless others to dedicate their lives to serve the nation.

“Rizal’s ardent love of country and unfettered desire to cultivate not only his intellect but also the intelligence of his countrymen have led to a reawakening of the Filipinos’ patriotism and sense of responsibility,” Duterte said.

“May his shining example to always think of the greater good be emulated by generations of our youth who look up to him today,” he added.

“May the freedom we now enjoy as a people be cherished, be further fortified and be kept thriving through the solidarity that we show in combatting the ills of illegal drugs, corruption, and criminality,” Duterte said.

He said that overcoming divisiveness was a step towards keeping the spirit of nationalism alive.

“Let us keep the embers of nationalism alive as we courageously face the challenges of apathy and divisiveness and triumph over them just like what Rizal tenaciously did more than 120 years ago,” Duterte said.

“Together, let us strengthen and protect our liberty that our heroes have so unselfishly shed their blood for,” he added. (RAG with reports from PNA)