Eastmincom’s Santos is next AFP chief 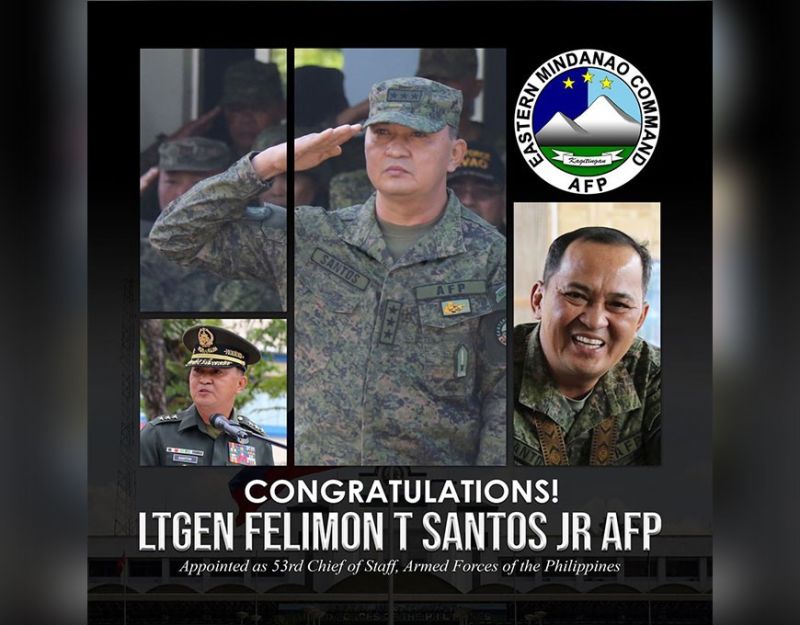 EASTERN Mindanao Command (Eastmincom) commander Lieutenant General Felimon Santos Jr. is the next chief of staff of the Armed Forces of the Philippines (CSAFP).

On January 2, President Rodrigo Duterte, Army’s commander-in-chief, approved the appointment of Santos as AFP’s next chief of staff as per the endorsement of Defense Secretary Delfin Lorenzana, chair of the AFP Board of Generals (BOG).

Santos will take over the post of General Noel Clement who will step down on January 5 when he reached his military retirement at 56.

The newly-appointed AFP chief of staff is a member of the Philippine Military Academy (PMA) “Sinagtala” Class of 1986. Prior to his assumption as chief of Eastmincom in January 2019, he was also designated as the commander of the 7th Infantry Division, Philippine Army based in Fort Ramon Magsaysay, Laur, Palayan, Nueva Ecija.

He spent his junior years with the 39th Infantry Battalion, a unit deployed in various provinces in Mindanao, after graduating at the PMA in 1986.

“The Command takes pride in the appointment of Lt. Gen Santos Jr. as the New CSAFP. In his assumption, we will be looking forward for the continuous implementation of the peace initiatives that will bring continuing stability and peaceful environment,” Eastmincom Public Information Office (PIO) chief Lieutenant Colonel Ezra Balagtey said on Santos’ designation.

During his stint as the Eastmincom commander, the command made achievements in its fight against insurgency in their jurisdiction with the surrender of 696 regular New People’s Army (NPA) members, the arrest of 85, and the death of 56 rebels during different encounters. The army said this led to the decrease in rebel incidents in Eastern Mindanao. (JCR)