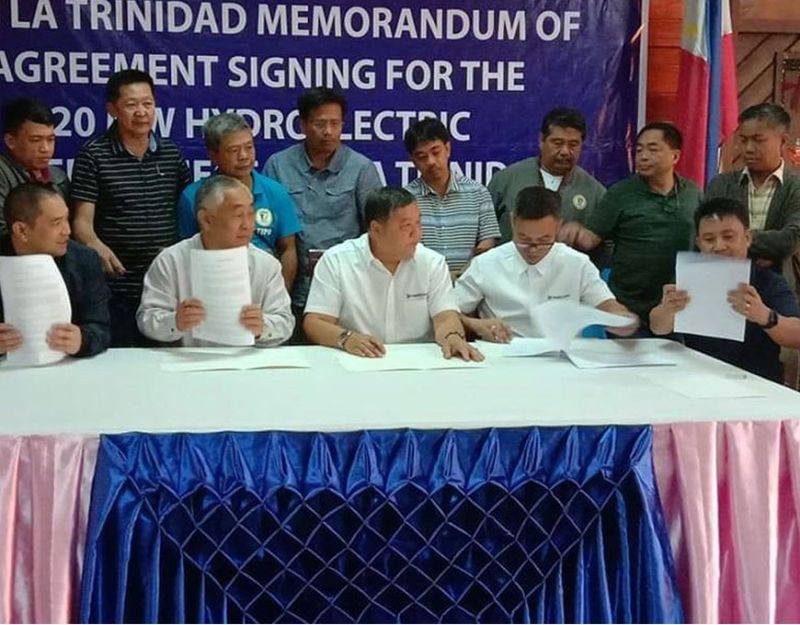 LA TRINIDAD -- Benguet's capital town welcomes the 2020 with the signing of an agreement for the construction of a hydro power plant.

Aboitiz-owned Hydroelectric Development Corporation (Hedcor) and officials of La Trinidad signed on January 6 a memorandum of agreement (MOA) for the construction of a 20-megawatt (MW) hydroelectric power, which also covers the towns of Sablan.

"For the two towns, we will be paying the real property taxes which is big and business taxes. The MOA that we just signed is voluntary, giving La Trinidad a share of our revenue, one centavo per kilowatt hour that is close to more than P600,000 a year, a minimum depending on our production," he added.

Faelnar said a free prior and informed consent has been finished for both Indigenous Peoples of Sablan and La Trinidad, adding the project is part of their corporate social responsibility (CSR) and another step to drive change that would advance communities.

La Trinidad Mayor Romeo Salda said the hydro power plant brings additional income for the town in lieu of the real property taxes and business taxes that will be paid by the company.

Salda acknowledged the company for its CSR for the different barangays of the town and remain bullish for additional CSR projects benefiting the municipality.

Construction of the 20-MW hydro power plant will commence on March 2020 and it would take around 20 months for its completion.

Faelnar said they are also looking at several Benguet towns such as Kabayan, Buguais, Bokod and Kibungan for potential construction of hydro power plants.

Hedcor, a wholly-owned subsidiary of Aboitiz Power, specializes in generating renewable energy from run-of-river hydropower systems. It started 1975 in Davao City and started operating in Benguet province in 1985. To date, Aboitiz has plants in Itogon, Tuba, Bakun, Sablan and La Trinidad.