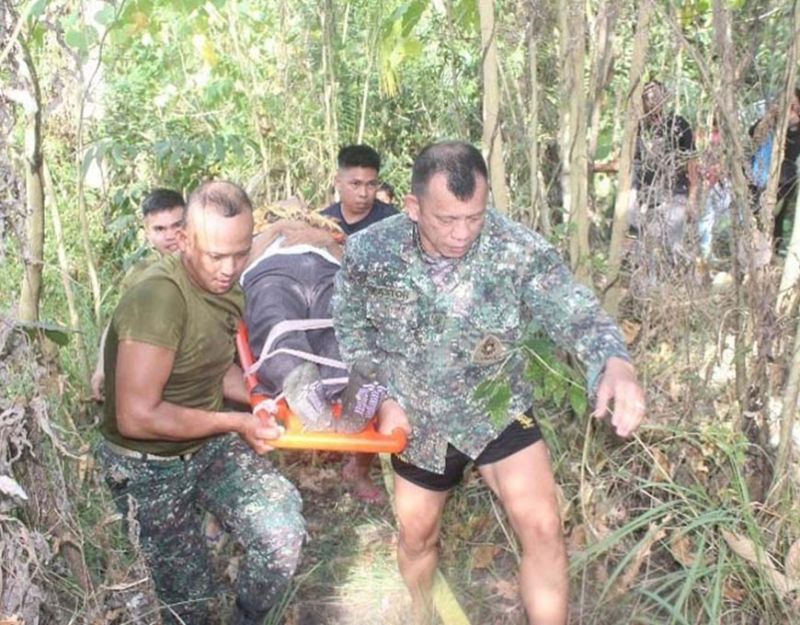 ZAMBOANGA. A team of soldiers, policemen and firemen rescue eight people who were injured when the van they were riding fell into a ravine Monday, January 6, 2020, in Sitio Mala, Barangay Panubigan. Those injured were among the 20 passengers of the ill-fated van. (Contributed photo)

EIGHT people were injured, while 12 others were unscathed when the vehicle they were riding fell into a ravine in an east coast village of Zamboanga City, the police reported.

The accident happened shortly after 1 p.m. Monday, January 6, in Sitio Mala in the village of Panubigan, 34 kilometers east of the city.

The identities of the victims were not immediately available except that two of those injured were minors, said police.

Investigation showed the victims were aboard an L300 van that fell into a ravine after its driver lost control of the steering wheel while traversing the highway in Sitio Mala in the village of Panubigan.

The Marine Battalion Landing Team-11 (MBLT-11) has coordinated with the Police Station 2 and Bureau of Fire Protection in the village of Curuan after a concerned citizen reported the incident to the MBLT-11 troops manning a checkpoint in the village of Sangli.

A rescue team composed of Marines, policemen and firemen was immediately dispatched. It rushed the victims, especially those injured, to the hospital for treatment.

"The quick and immediate response of the Marines and other units involved prevented further injury to the victims and most importantly no lives were lost due to the tragic accident," the police said. (SunStar Zamboanga)