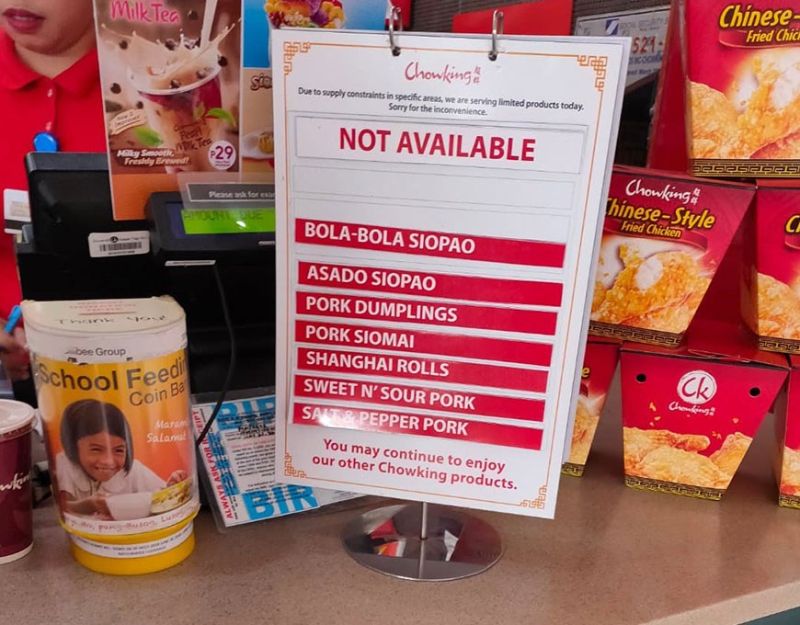 DAVAO CITY. Fastfood chains in Davao City have reportedly stopped serving pork-based food options on their menu since their supply of pork from Manila are banned entry in the city. (Photo by Reuel John Lumawag)

THE decision of some fastfood chains to stop serving pork-based products is putting African Swine Fever (ASF)-free Davao Region in a bad light, an association of hog raisers claimed.

In a phone interview with SunStar Davao, Hog Farmers Association of Davao, Inc. (Hogfadi) president Eduardo So said some Davao City branches of Manila-based restaurants like Chowking have ceased serving pork because their source of pork meat is in Manila.

He said it gives the impression that the Davao Region is greatly affected by the disease.

Davao City is one of the areas in the region that is currently implementing a strict pork import ban and has remained free of ASF.

(It is bad for us that they remove pork products in their menu because they sourced it from Manila. We were the ones who cannot eat products when we were an ASF-free region. The consumers would hesitate and it would seem like we were affected)

He said fast-food companies can always source their pork in Mindanao.

“Daghan tag supply. Wala gyud problema sa atong supply (We do not have problems with our supply). They are always welcome to invest in Mindanao. Pwede man sila magkuha diri (They can get pork meat here),” he said.

He said these fastfood chains do not even explain to the public about their decision, intensifying the people’s negative speculations.

So added it would also affect their production since these restaurants can be good markets for their hogs.

(It will force us to cut out our production because there is no demand and if we will be short of supply, we will be blamed)

Last year, some Chowking branches in the city stopped offering their pork-based food products such as dumplings, siomai, shanghai rolls, sweet and sour pork, and salt and pepper pork.