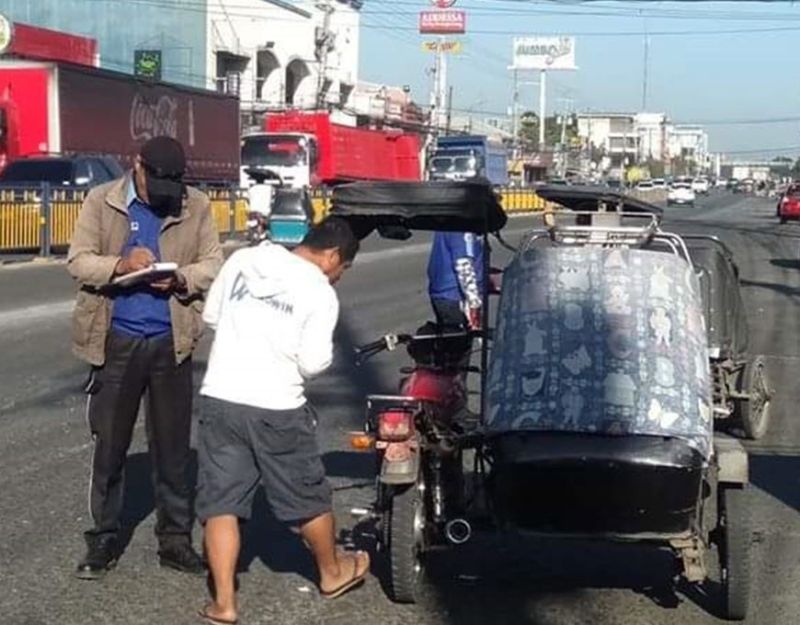 PAMPANGA. A traffic enforcer in the City of San Fernando apprehend a driver in line with the enforcement of tricycle ban on major thoroughfares. (CPOSCO photo)

THE Traffic Management Division (TMD) of the City of San Fernando has welcomed the new year with a vision of how to ensure orderliness on its major and minor thoroughfares.

From strict implementation of road measures, the traffic office is also asking for the cooperation of the Fernandinos and other road users in observing traffic rules and regulations.

"We can always create and implement laws, and penalize violators but it will never guarantee road orderliness unless they will understand the importance of being road-worthy drivers and users," said City TMD officer-in-charge Willie Manaloto.

Manaloto, who assumed post on January 1, said discipline and respect to traffic rules and regulations must be instilled among motorists and commuters, sidewalk vendors, and even traffic enforcers to ensure the safety of every road users.

"In all aspects, discipline and respect to others play a major role in ensuring the orderliness of the community. And I believe that Fernandinos and Kapampangans have it in them, we just have to awaken it," he said.

To ensure commitment among traffic enforcers, Manaloto said he is implementing a "one-strike" policy for those who are caught not properly performing their duties.

He also instructed all traffic enforcers to intensify their operations against traffic violators across the city.

"We gave considerations to some motorists, particularly tricycles during the holiday season but now that it's over, we will be firm on banning them on our major thoroughfares," Manaloto said.

He also warned vendors along the road to never encroached public road or their products and equipment will be confiscated.

"We are letting them know our existing road measures so they can have no excuse for violating it. All we ask them is to have the discipline to observe them and we will have a more orderly city," he said.