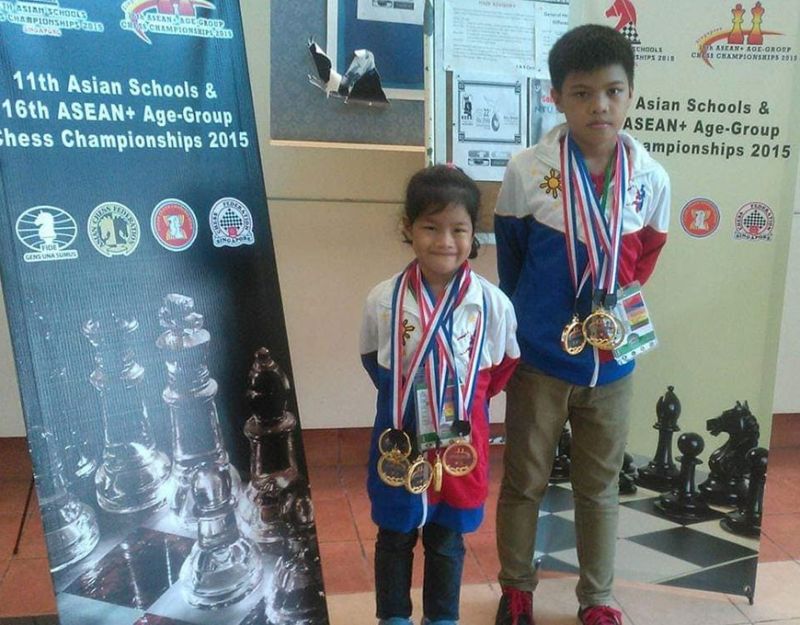 CAGAYAN DE ORO. The Canino siblings, Ruelle and Ronald, during one of their age-group chess exploits abroad. (Contributed photo)

Already, the 12-year-old Canino of Kauswagan Elementary School brought home to the country at least five individual golds from the Asean chess mostly held in foreign shores. But she has still to undergo the tedious qualifying tourneys across the nation in order to represent the Philippines anew in the international chess arena in the event that she comes out lucky.

In the Visayas qualifier, "Super Tawing" Canino and Under 12 Girls compatriot Lyn Getubig from Tagoloan town, Misamis Oriental both scored 5.5 points to be in the top 3 alongside eventual winner Kristina Concepcion Belano.

Next step for the top-3 qualifiers in each bracket is the National Age Group Grand finals, which is yet to be scheduled in Luzon. The Philippine roster to this year's Asean chess championship will be finally decided.

The older Canino and Aquino, who both transferred from Misamis Oriental General Comprehensive High School (MOGCHS) to Perpetual Help in Manila, made a 1-2 finish in Under 20 boys rivalry, towing the field with a similar 5.5 points.

Equally-impressive were Mary Joy Tan of Jasaan, Misamis Oriental and Ilar of El Salvador City, Misamis Oriental, who emerged champions in Under 18 Girls and Under 10 Boys with 6.5 and 6-point results, respectively, in seven rounds.

Prior to campaigning in the Queen City of the South, Tan ruled the secondary chess competitions of the regional meet in Tangub City and the Parents Chess Club in Cagayan de Oro.

"Mary Joy Tan is in a roll, though she still has a long way to go. Kelangan pa niya og daghang break and exposures. There's still more in her chess arsenals that must have to be developed," said newly-minted Fide Master Rustum Tolentino, the mentor of the streaking Tan with the Masters Class Chess School in Cagayan de Oro.

Capilitan (6 pts) of Mastersons Avenue Elementary School and Paquinol (5.5 pts) from Cubed of Capitol University finished second and third behind solo champion Iana Angela Sotaridona in the Under 10 Girls class. Manticao pride Me Ann Joy Baclayon, now playing for Far Eastern University (FEU) in Manila, managed just 4.5 points in Under 18 Girls skirmishes, but enough for her to place third and qualify.

The Mindanao leg or the last qualifying stage for the National Age Group Grand finals will be held either in General Santos City or Davao City in a still undisclosed playdates.