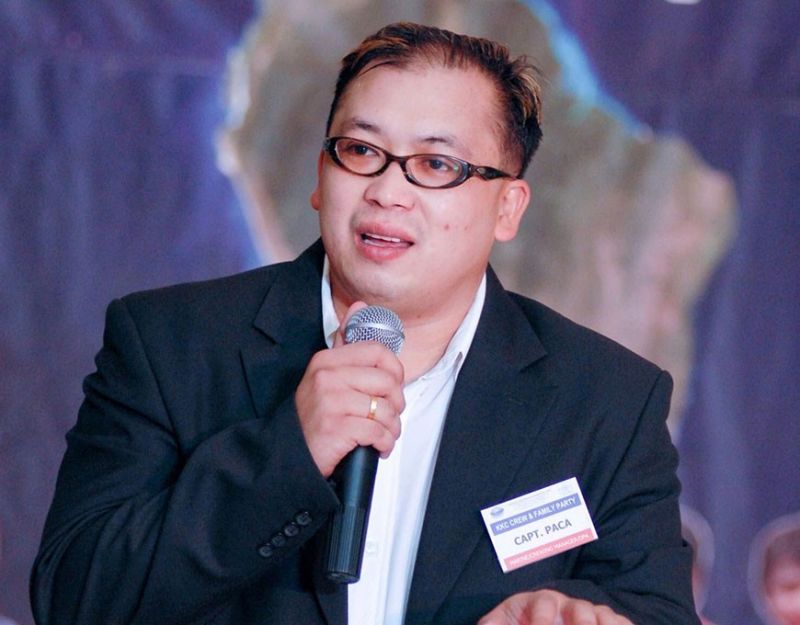 STANDING STAll AMID LIFE’S DIFFICULTIES. Captain Rodien Paca started working and studying hard since seven years old, and his patience, determination and grit have brought him far. Besides providing a comfortable life for his family, Paca now enjoys growing his business knowing that providing livelihood to his fellow Filipinos is his new mission in life. (Photo Grabbed From Capt. Rodien Paca’s Facebook Page)

CAPTAIN Rodien Paca knew he had no other way to finish school but through obtaining a scholarship.

He was born from a poor family in Naga City. He lost his father when he was seven years old.

Tha family’s sari-sari store business helped pay his tuition in elementary and high school, but Paca knew it wasn’t enough. He had to do something.

“For someone who experienced life’s difficulties, you are determined to find ways to make life a bit easier. That time, I knew I had to be a scholar so I could finish school,” said Paca, a seaman turned entrepreneur and an international speaker and lecturer for United Nations Conference on Trade and Development (UNCTAD).

Paca finished high school with flying colors, earning him a spot to qualify for any college scholarship grants in the city.

“When I already started working, I had to endure the pain of being away from my family. To do that I focused on working and learning all there is in ship management while I was thousands of nautical miles away from my loved ones. I started from scratch and eventually moved up in the rank,” Paca said.

At the age of 27, he reached the highest position of a seaman’s career making him the youngest maritime captain in the world in an international ship.

“When I went to Norway, I studied additional courses in Poland and Finland. That made me an international graduate which led to faster promotion in the job,” Paca said.

As a ship captain, Paca was earning at least P400,000 a month (in early 2000) but he realized money wasn’t about everything.

“I slowly realized that the view at the top isn’t always happy and fulfilling,” he said. “A seaman’s life is a painful experience.”

An airport, for him, is a sentimental place. “It is a happy place when you arrive and the saddest when you leave,” he said.

“For eight to nine months you don’t get to see your wife and your children and the three to four months break aren’t enough to make up for that lost time,” he said, adding that the break wasn’t really a vacation but a time to study and look for a job again.

Paca resigned from being a seaman when his second child was born. He let go of the high-paying job and transferred to a Japan-based shipping management company that required him only two weeks of overseas travel per month.

Paca first became a general manager for two years before he landed as chief operating officer and vice president.

While in the corporate world, he pursued his long-held desire of acquiring further studies in logistics and ship management in the hope of opening his own firm one day.

Paca studied masters in ship management at Lloyds Maritime Academy in the United Kingdom. He obtained a doctorate degree in maritime management from John B. Locson University in Iloilo City and an MBA degree major in shipping and logistics from Middlesex University in London.

He also earned a scholarship to attend the United Nations Port Management Masteral in Dublin, Ireland hosted by UNCTAD.

“I wanted to use all the knowledge I gained to put up my own business,” he said, adding that if he failed in business for three years, he could always go back to being a seaman.

In 2012, Paca established PTMS Asia, a business he fully owned. The firm now has 900 employees.

The economic background I had when I was growing up inspired me to work harder every single day. Of the six scholarship grants I passed, I picked the Norwegian maritime scholarship and that brought me to places.

I didn’t take the business seriously at first. Maybe because I had doubts I would succeed. I started with six employees and as the business grew bigger and bigger, and the employee count rose from 200, 300 and now 900, I then realized this was what I was destined to do. I get emotional, especially during company events, like Christmas when I see all of the employees and their families. It sends a message that this is not about profit anymore. It’s about giving everyone the opportunity to grow and change their lives. And my workers paid me back by their loyalty and by working hard.

A seaman’s job isn’t a regular one. During the three months of shore leave you spend it advancing your skills and re-applying for the job again. When I got into this business and learned the intricacies of it, I realized that doing business with ports earns better than working in ships. And for you to succeed in this venture, you must have the right people with you to execute the various operations in this kind of business.

After quitting my seaman’s career and while working for a Japan-based company I took further studies. I took classes in ship management, logistics and port management. I love learning new things and new skills.

I experienced a lot of difficulties growing up but these did not hinder me to achieve my goals. I wasn’t given that many options back then but it didn’t discourage me from pursuing my dreams now. You shouldn’t stop dreaming and working for these dreams to come true.