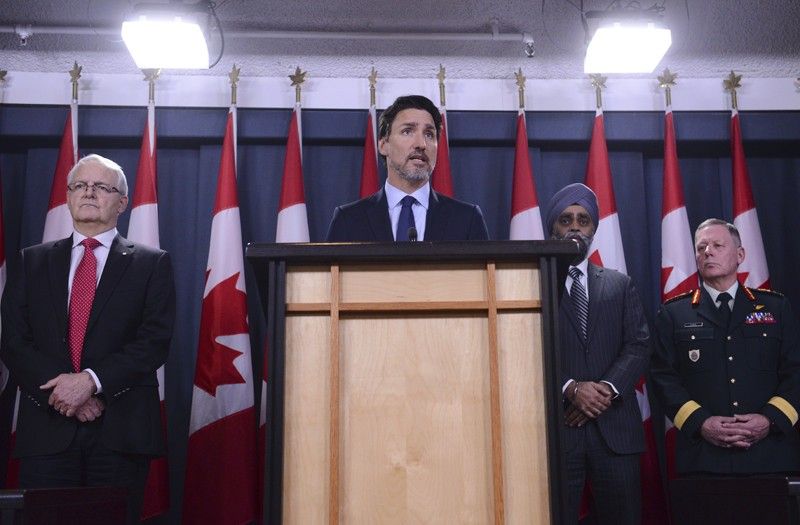 TORONTO — Canadian Prime Minister Justin Trudeau vowed his government will get answers after a Ukrainian passenger jet crashed, killing at least 63 Canadians, just minutes after taking off from Iran's capital.

Trudeau said Wednesday, January 8, 2020 138 passengers on the flight were connecting to Canada. The flight included many international students who were studying at universities across Canada. Newlyweds and a Canadian family of four were also on the flight.

Trudeau said his government is pushing to be part of the Iranian-led investigation of the plane crash near Tehran that killed everyone on board. Getting answers from Iran might prove difficult as Canada closed its embassy in Iran in 2012 and suspended diplomatic relations.

The crash of the Ukraine International Airlines plane came hours after Iran launched a ballistic missile attack on Iraqi bases housing United States (US) soldiers, but Iranian officials said they suspected a mechanical issue brought down the three-and-a-half-year-old Boeing 737-800 aircraft.

Ukrainian officials initially agreed, but later backed away and declined to offer a cause while the investigation is ongoing.

“Canadians have questions and they deserve answers," Trudeau said.

Asked if he could say whether the plane was shot down or not, Trudeau said: “I cannot. It's too early to speculate.”

“Know that all Canadians are grieving with you," he said, addressing the victims' families.

Transport Minister Marc Garneau said soon after the departure of the plane contact was lost. He said the black box information is needed.

Authorities said they found the plane's so-called black boxes, which record cockpit conversations and instrument data. But it was not immediately clear how much access to the information the Iranians would allow.

Canada is offering technical assistance to the upcoming investigation in Iran. Canada's Transportation Safety Board said it has appointed an expert to monitor the progress of the investigation by Iran's civilian aviation agency.

Aviation experts were skeptical about Iran’s initial claim that the plane was brought down by a mechanical problem.

The plane carried 167 passengers and nine crew members from different nations. The Canadian flag on Parliament Hill was lowered to half-mast. The US embassy in Ottawa also lowered its flag.

US President Donald Trump offered his condolences in a phone call with Trudeau on Wednesday.

It's one of the worst losses of life for Canadians in an aviation disaster. In 1985 a bomb exploded and killed 329 people aboard an Air India flight. Air India Flight 182 from Montreal to New Delhi exploded over the Atlantic Ocean near Great Britain on June 23, 1985. Most of the victims were Canadian.

The Tehran to Toronto route via Kyiv is an affordable route for Iranian Canadians and international students. There are no direct flights.

Payman Paseyan, a member of the Iranian-Canadian community in Edmonton, Alberta, said about 27 people from Edmonton, including a family of four that he knew, were on the flight. Mourners gathered outside Alberta's legislature on Wednesday night for a vigil.

Two professors from the University of Alberta, Pedram Mousavibafrooei and Mojgan Daneshmand, and their daughters Daria and Dorina died.

Paseyan said he often would go to the gym with the father and described him as a nice guy who often visited his former restaurant with his family.

He said most of victims were visiting family in Iran over the holidays and that many were dual citizens and many were international students.

“One of the reasons why you take that flight is you wouldn't want to take a flight that has a connection in the United States because international students can't do that," he said.

Younes Zangiabadi, a board member of the Iranian Canadian Congress, said because of US sanctions, there are not many options for Iranian-Canadians to travel to Iran

Paseyan said members of the Iranian-Canadian community learned of the crash while being glued to the news after Tuesday's missile attacks in Iraq.

He said there are questions about what caused the crash but said that's not the focus right now.

“Whether it's a missile, mishap or a technical issue or whatever, we want our community members. We lost one percent of our Edmonton Iranian community members on that flight. It's just terrible," he said.

Western University said three current graduate students died and one was an incoming graduate student. They did not name the students. The University of Waterloo also said two PhD students' names were on a list of passengers provided by the airline.

In a letter to parents, the principal of Northern Secondary School said the school is grieving the loss of Maya Zibaie, a Grade 10 student.

A dental office in Aurora, Ontario confirmed that Parisa Eghbalian, a dentist, and her daughter Reera Esmaeilion died. Eghbalian's husband, Hamed Esmaeilion, is also a dentist at E&E Dentistry, but was not travelling with his wife and child. He was supposed to pick up his 9-year-old daughter and wife at Toronto's airport. Now he's headed to Iran. (AP)