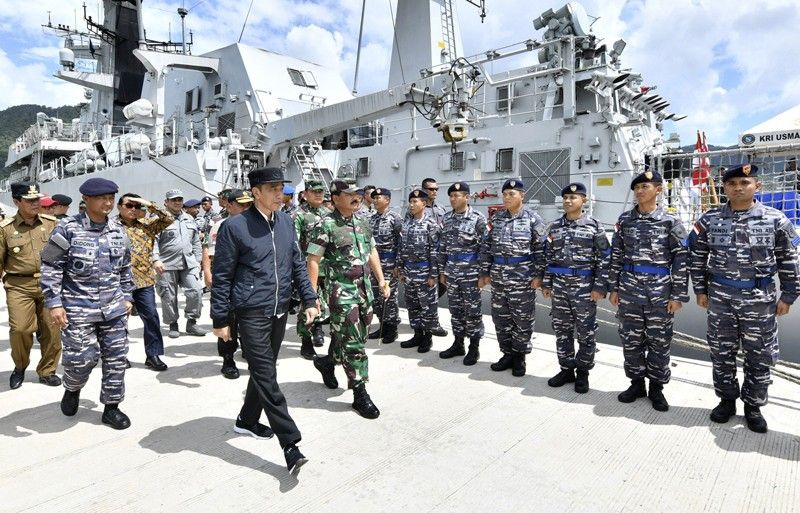 JAKARTA, Indonesia — Indonesian President Joko Widodo on Wednesday, January 8, 2020 reaffirmed his country's sovereignty during a visit to a group of islands at the edge of the South China Sea that China claims as its traditional fishing area.

Widodo, accompanied by top military officials, toured Natuna Islands on a naval ship in a move designed to send a message to Beijing.

"Natuna is part of Indonesia's territory, there is no question, no doubt," Widodo said in a speech after the trip. "There is no bargaining for our sovereignty."

He then presided over a meeting with local administration officials and fishermen, discussing issues including development of the remote islands, about 1,100 kilometers (680 miles) north of the capital, Jakarta.

His visit came a week after China's foreign ministry spokesman Geng Shuang in a news briefing in Beijing insisted that Chinese fishermen are free to conduct activities in their traditional fishing ground, which partly overlaps with Indonesia's exclusive economic zone.

"Whether the Indonesian side accepts it or not, nothing will change the objective fact that China has rights and interests over the relevant waters," Shuang said.

Shuang's statement drew a nationwide indignation in Indonesia and prompted the military to beef up its forces at the islands. Although China has been making such claims for years, recently dozens of Chinese fishing boats, escorted by its coast guard vessels, were reportedly making more aggressive moves in the area and ignoring Indonesia's warnings to leave.

Indonesia's military spokesman Major General Sisriadi said scores of warships and fighter jets had been deployed to the area and the government would also to activate a maritime information center as part of the country's efforts to monitor foreign incursions.

"We are on full alert," said Sisriadi, who goes by a single name. "Today, none of the foreign vessels has been detected violating Indonesia's sea borders for fishing."

China's "nine dash line," which it uses to roughly demarcate its ambitions for maritime boundaries that cover most of the South China Sea, overlaps with a section of Indonesia's exclusive economic zone extending from Natuna Islands.

Indonesia, the world's largest archipelago nation with more than 17,000 islands, has taken a tough stance against illegal fishing since Widodo took office in 2014. It has sunk more than 500 illegal fishing vessels since October 2014, many with explosives.

China has been embroiled in territorial disputes with smaller neighbors including Vietnam and the Philippines over islands, reefs and lagoons in the South China Sea. Beijing has constructed seven man-made islands and equipped them with military airstrips and missile batteries in a move criticized by Washington as the militarization of one of the world's busiest waterways. (AP)