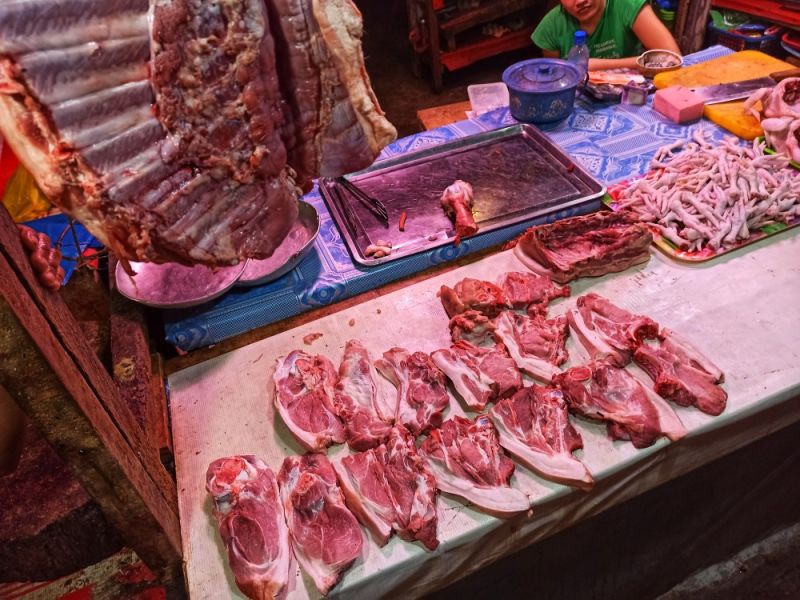 ILOILO. Pork products in a market in Jaro District in Iloilo City are available at P220 per kilo on Thursday, January 9, 2020. (Leo Solinap)

THE Iloilo City Government has extended its ban on pork products coming from Luzon to maintain the city's status as African Swine Fever (ASF)-free.

Mayor Jerry Treñas issued on Wednesday, January 8, 2020, Executive Order (EO) 03, Series of 2020, which states that live pigs, hog carcasses and pork originating from or processed in Luzon are banned from entering Iloilo City until June 2020.

A total ban is also implemented from countries identified as positive of ASF -- a highly contagious hemorrhagic viral disease that spreads rapidly with a very high mortality rate affecting domestic and wild pigs, but is harmless to humans.

The EO states that new cases were recently reported in Pangasinan and Pampanga in spite of the vigorous enforcement of "1-7-10 Protocol" issued in ASF identified provinces.

According to reports, the Department Agriculture (DA) has officially confirmed that the cause of swine deaths in Bulacan, Quezon City and Rodriguez in Rizal was ASF.

It reported that the first outbreak of ASF in Luzon was suspected by authorities to have been caused by the virus being brought to local farms via imported pork products or food scraps from hotels and restaurants which are then fed to pigs.

The EO said the DA has issued to date three administrative orders that will strengthen its collaboration with LGUS and other partners, namely:

1. AO 06 -- Guidelines in securing the Certificate of farm disease-free status in disease outbreak areas. This enables owners to get needed certification from DA-BAL declaring their farm is disease-free, and not affected by current swine disease in the subject area;

2. Revised guidelines on the local movement of swine pork, pork products and pork by-products outside disease outbreak areas. This policy strengthens procedures on said subject, and

3. Veterinary quarantine movement protocol during animal disease outbreaks emergencies. This ensures a protocol is in place and to manage, contain and control a suspected swine disease.

According to Treñas, Iloilo City is considered a leader of trade and commercial hub for Western Visayas.

The city is the main entry and exit of inter-regional conveyance through the Iloilo International Airport and Iloilo International Port in Loboc, Lapuz, Iloilo City, identified as third in ranking in terms of ship call at 11,853, fourth in cargo throughout at 491,719 million metric tons and fourth in passenger traffic at 2.4 million annually.

"Section 16 of Republic 7160 (Local Government Code of 1992) states that every local government unit shall exercise the powers expressly granted, those necessarily implied therefrom, as well as powers necessary, appropriate or incidental for its efficient and effective governance, and those which are essential to the promotion of the general welfare," Treñas stated in the EO.

Last October 10, 2919, EO 99-A, Series of 2019 was issued by the mayor, banning live pigs, hog carcasses, pork and pork products and by-products originating from, and or processed in Luzon from entering the Iloilo City for 90 days.

"There are still cases of African Swine Fever in the country particularly in Luzon, thus a possibility of it reaching Region 6 and cause high mortality and affect the food security of the Iloilo City," he said.

On September 2019 in the Province of Iloilo, Governor Arthur Defensor Jr. issued EO 159, ordering a temporary ban for swine, pork, pork products and by-products sourced from countries and localities in the Philippines identified by the DA positive for ASF.

Strict quarantine procedures were conducted in seaports and at the Iloilo International Airport by the quarantine teams of the municipalities of Cabatuan, Dumangas, Ajuy, Estancia and Carles.

Defensor earlier this month said the province of Iloilo is ASF-free. (SunStar Philippines)