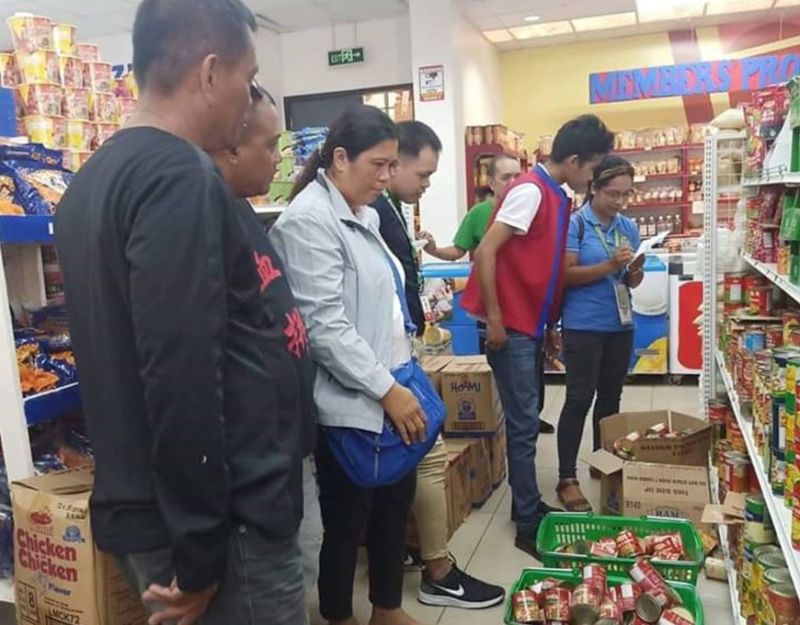 NEGROS. Members of the Provincial ASF Task Force instruct personnel of a commercial establishment in La Castellana to pull out canned goods sourced from ASF-affected areas during their inspection on Wednesday, January 8, 2020. (Contributed photo)

SEVERAL boxes of canned goods were pulled out from a commercial establishment in La Castellana town for violating the provincial ordinance permanently banning the entry of pork and other pork products from Luzon and other areas affected by the swine disease.

Dr. Ryan Janoya, head of Animal Health and Meat Inspection Services Division of the Provincial Veterinary Office (PVO), said members of the Provincial ASF Task Force removed from the shelves various products like pork and beans and meat loaf, among others, during their inspection on Wednesday, January 8.

Janoya said these pork products sourced from Luzon-based manufacturers will be recalled by the establishment to its distributors.

"Aside from entry, the provisions of the provincial ordinance included permanently banning the sale, distribution, transportation and storage of pork and other pork products coming from Luzon and other ASF-affected areas," he stressed.

Effective starting December 6, the ordinance provides continuous inspection and confiscation of pork products from ASF-affected areas that will be intercepted among ports.

It was an offshoot of the 90-day temporary pork product ban implemented through Executive Order 19-14 Series of 2019 issued by Governor Eugenio Jose Lacson in September 2019.

The temporary ban was among the measures to ensure the safety of the P6 billion swine industry of Negros Occidental, one of the top producers of swine in the country.

It was implemented days after the Department of Agriculture (DA) confirmed positive cases of ASF in Luzon, particularly in farms of Rizal and Bulacan.

Under the ordinance, violators may face penalties ranging from P1,000 to P5,000 and an imprisonment of one year depending on the gravity of the offense.

Janoya said the establishment in La Castellana forms part of the big and medium-sized stores to be inspected in the province's Fifth District. Others were inspected last year.

He said the establishment's management did not resist the inspections as copies of the ordinances were already distributed to them including those of its other branches.

"This will serve as warning to the establishment. If it continues to violate the ordinance, the task force will confiscate their products next time," Janoya said, adding that it will also be subjected to penalties depending on the offense.

On January 6, members of the task force also confiscated and disposed about 25 kilograms of pork products from Luzon.

Products like chicharron, longganisa, "putopao," and pork meat, among others were burned at the Bacolod-Silay Airport in Silay City.