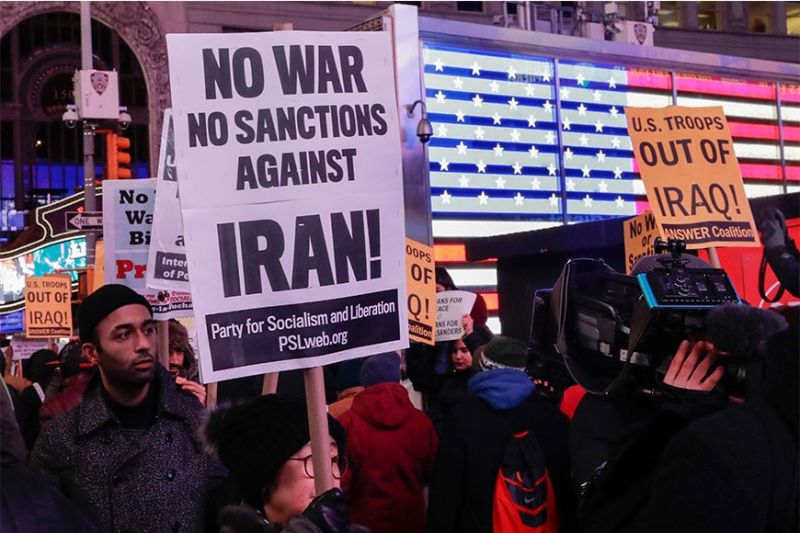 USA. Protesters gather in Times Square Wednesday, January 8, 2020, in New York. The US and Iran stepped back from the brink of possible war Wednesday, as President Donald Trump indicated he would not respond militarily after no one was harmed in Iran's missile strike on two Iraqi bases housing US troops. (AP)

OFFICIALS in Misamis Oriental and Cagayan de Oro City have expressed concern on the plight of overseas Filipino workers (OFWs) in countries affected by tensions between Iran and the United States (US).

Misamis Oriental Governor Yevgeny Emano called for prayers for the safety of OFWs working in the Middle East, following the missile strikes by Iran on Wednesday, January 8, 2020, at two Iraqi bases that housed US troops.

(I hope the government will do everything possible to assist our fellow OFWs not only in Iraq, but also those in areas that may be affected by the bombing of certain places in the Middle East.)

(I hope they will not be neglected, as they have no other reason for working abroad but to support their loved ones who are awaiting their safe return home.)

Rodriguez said while a committee is still studying the evacuation of Filipinos in the entire Middle East, the evacuation should start immediately to avoid possible casualties if a conflict arises.

"Iran will definitely avenge the death of Soleimani by hitting Americans and American military assets, and the US is ready to strike 52 targets in Iran in case American personnel or assets are hit," he said in a statement.

"Iraq, which is now highly influenced by Iran, has called for the withdrawal of American troops there which the US government is not prepared to do. These countries are the powder kegs of almost certain violence. Our Filipino workers should now be immediately evacuated! Time is of the essence to avoid Filipino casualties!" it added.

No Americans were killed in Iranian strikes on two military bases in Iraq early Wednesday, and US President Donald Trump also said "the United States is ready to embrace peace with all who seek it."

Iran's foreign minister also announced they had "concluded proportionate measures" in its retaliation for the killing of the country's most revered military general.

Cagayan de Oro City Mayor Oscar Moreno is hoping that de-escalation efforts will be fruitful to ease the tension between US and Iran, pointing out that an unabated escalation may result in more complex problems that may affect the entire world.

Moreno said US-Iran tensions might trigger an oil crisis, as well as financial difficulties for smaller nations especially those heavily dependent on imported oil, such as the Philippines.

"Unless the tensions are eased and a bloody war is averted, the Philippines -- being heavily dependent on oil imports -- will have to bear the brunt of a global oil shortage that will spawn rising prices of domestic oil supply," he said.

market. We will certainly get hit not only by the increased price, but also by the need of having to produce more pesos. A diminution in value of our peso vis-a-vis the US dollars will mean higher cost for us," the mayor added.

Moreno said such a situation will lead to some domino effect in the country's economic climate.

"We need cooler heads in the leaderships of the major players, such as the US, Iran, Iraq and the rest of the Arab World. Global peace is priceless!" he added.