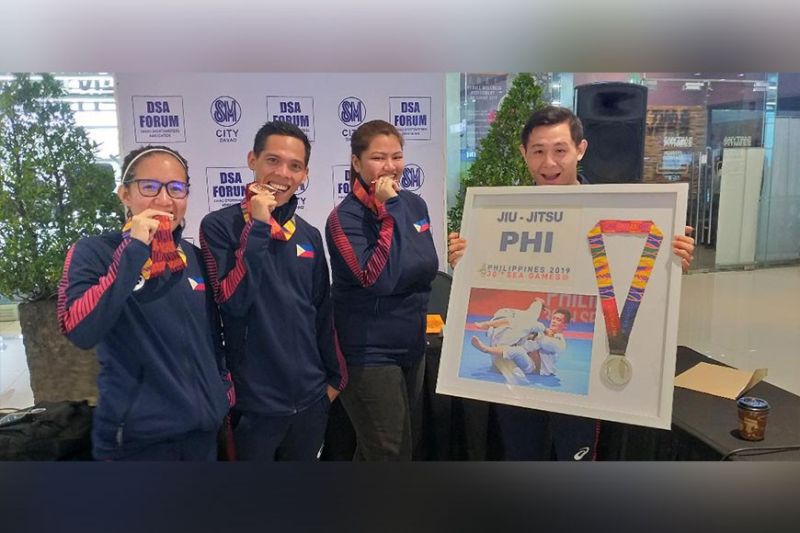 THE hype may have died down since the country celebrated the overall championship victory in the 30th Southeast Asian (SEA) Games 2019 almost one month ago but Davao City’s medalists’ morale remain high despite their bittersweet experience in the biennial meet.

Obstacle course racing mixed team relay gold medalist Kylmille Keilah Rodriguez, 30 years old, said it was a challenge and costly for her to fly to Manila before for the qualifying races so she could earn a slot in the SEA Games-bound national team.

“It was financial hurdle for me. Obstacle course racing is a new sport that started in Manila and the qualifying events were held in Manila so I had to fly in and fly out to compete and make a name for myself, maka-podium finish para mag top eight sa female based on points system,” she told members of the Davao Sportswriters Association (DSA) during their weekly forum Thursday, January 9, at The Annex of SM City Davao.

Rodriguez, an architect by profession and owns Happy Fit Nutrition Hub, along with fellow Dabawenyo Nathaniel Sanchez only trained with the national obstacle course racing team for four months.

Women’s kurash bronze medalist Sydney Tancontian, 19 years old, apologized for placing third in the new sport where she competed in the Games.

“I’m new to kurash. It’s my very first time in kurash. Di sya disadvantage pero nanibago ako. I’m sorry to disappoint you,” she explained about her bronze finish, considering that she was among the top women’s sambo bet. However, it was too late for the World Youth and Juniors Championships 2019 bronze winner to cut weight since her current weight was not included in sambo’s final categories.

The greatest challenge during the competition was facing heavyweight rivals who were more familiar with kurash than her. Kurash, unlike judo and sambo where she was accustomed to, was a standing only battle.

Jiu Jitsu men’s 69 kilograms silver medalist Marc Alexander Lim, meanwhile, said he had to face bigger opponents during tournament as the weigh-in were held one day before the competition.

“Some cut more weight than the others. I didn’t cut so much weight. It’s a week’s process of dehydrating yourself to get to the 69 kilograms but during the game, my rivals were already bigger than me,” he said although he overcame the size challenge in most of his matches with his technique and mental toughness, which he got from playing chess in elementary and secondary.

He was particularly thankful for the many Filipinos who gave him a push and cheered for him even when he was struggling during the matches.

“Next time I will do better,” a 22-year-old Lim, an Asian Games and Asian Indoor Martial Arts Games (Aimag) veteran and owner of Limitless Fitness Gym said.