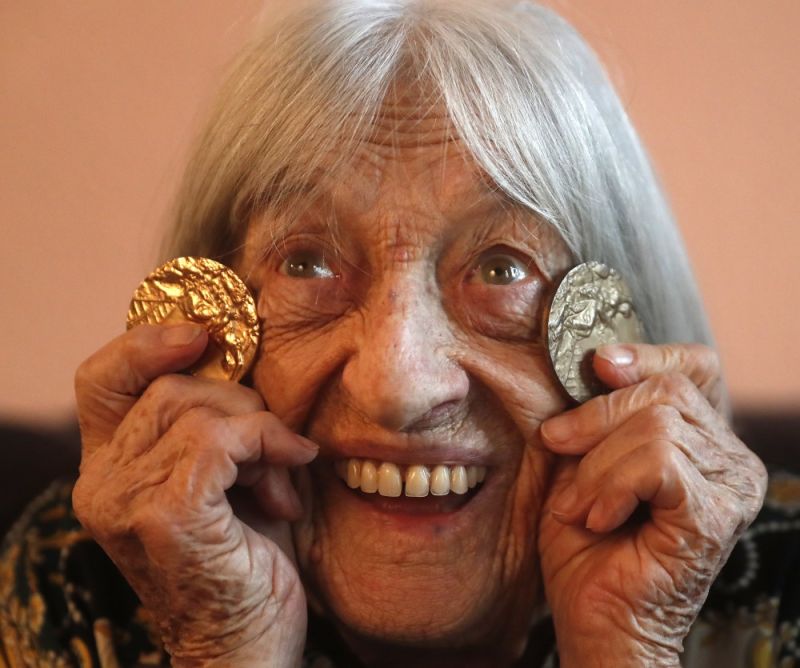 Agnes Keleti, former Olympic gold medal winning gymnast, poses for a photo with two of her Olympic medals at her apartment in Budapest, Hungary Wednesday January 8, 2020. Although she turned 99 on Thursday, even a 9-year-old would have a hard time keeping up with Agnes Keleti's irrepressible energy and enthusiasm. Keleti is the oldest living Olympic champion and a Holocaust survivor. She won 10 medals in gymnastics — including five golds — at the 1952 Helsinki Games and at the 1956 Melbourne Games. (AP)

BUDAPEST, Hungary — Although she turned 99 on Thursday, January 9, 2020 even a 9-year-old would have a hard time keeping up with Agnes Keleti's irrepressible energy and enthusiasm.

Keleti is the oldest living Olympic champion and a Holocaust survivor. She won ten medals in gymnastics — including five golds — at the 1952 Helsinki Games and at the 1956 Melbourne Games.

Still, speaking on the eve of her birthday at her elegant apartment in downtown Budapest, Keleti hardly wanted to mention her achievements and her long life, which includes adventures and great accomplishments, but also heartbreak and tragedy.

Keleti's family was decimated during the Holocaust, which she survived thanks in part to assuming a false identity and working as a maid. While her mother and sister also survived, her father and uncles perished at Auschwitz and were among the 550,000 Hungarian Jews killed in Nazi death camps, Hungarian forced labor battalions, ghettos or shot to death into the Danube River.

"The past? Let's talk about the future," Keleti said. "That's what should be beautiful. The past is past but there is still a future."

Even her Olympic memories seem to center not on her athletic prowess — among Jewish athletes, only American swimmers Mark Spitz and Dara Torres have won more Olympic medals — but rather on the travel opportunities her sporting career offered.

"It's not the medals that are significant but the experiences that came with them," Keleti said while holding some of the nine medals she still has (one was reportedly lent to a journalist for a project and never returned). "I loved gymnastics because it was possible to travel for free."

Even standing on the podium to get her medals didn't really appeal to her: "I didn't want to show myself. I loved to do gymnastics."

After winning a gold medal in the floor exercise at the Helsinki Games, as well as a silver in the team event and two bronzes, Keleti won three individual golds in Melbourne — balance beam, floor exercise and uneven bars — and another in a team event, while also winning silver in the all-around competition and another team event. She could have won even more but an injury kept her from competing at the 1948 London Olympics.

She doesn't watch sports on television these days, not even the Olympics, which "aren't very interesting. I prefer mountain climbing."

The climbing days may be behind her but she seems most happy taking walks around Budapest, where she returned a few years ago after living for decades in Israel, or traveling to places like Barcelona, which she visited last year.

Keleti, who began her gymnastic career at the age of 4 and won her Olympic medals at the hard-to-believe ages of 31 and 35, was also a talented cello player and, after moving to Israel in 1957, taught gymnastics for years.

"I love children and I also love to teach them," she said.

Asked about the most important thing children should learn, Keleti answered without hesitation: "The joy of life."

Keleti, whose infectious laugh seems always ready to spring into action, has a favorite prank for those expecting to meet a frail, weak lady entering her 100th year. She extends her hand in greeting, makes sure her grip is good and tight, and suddenly yanks the unsuspecting "victim" toward her with surprising force.

"I'm strong," she says with a big chuckle after the pull. "And silly!"

While she stopped doing full leg splits on the floor not long ago, she still does them standing up while holding her son Rafael's hand, or sitting on a couch.

If there's one issue she continues to have an opinion about, it's the premature pressure and exhausting exercises young gymnasts may be exposed to.

"That's not good," Keleti said. "Tough gymnastics exercises damage their development. It shouldn't be started early. Not to mention that, in the first place, it's the children's minds that should be developed, not their bodies."

What did she do to train her mind?: "I studied languages and I saw the world."

Keleti has been given a long series of prestigious awards in Hungary and Israel, including being one of Hungary's 12 "Athletes of the Nation" since 2004 and getting the Israel Prize, considered that state's highest honor, in 2017. But, as with her Olympic medals, she doesn't seem impressed by the recognition of her successes.

"I excelled?" she asks, almost incredulously. "I did what I could and that's it." (AP)