Movie review: Caring for the elders 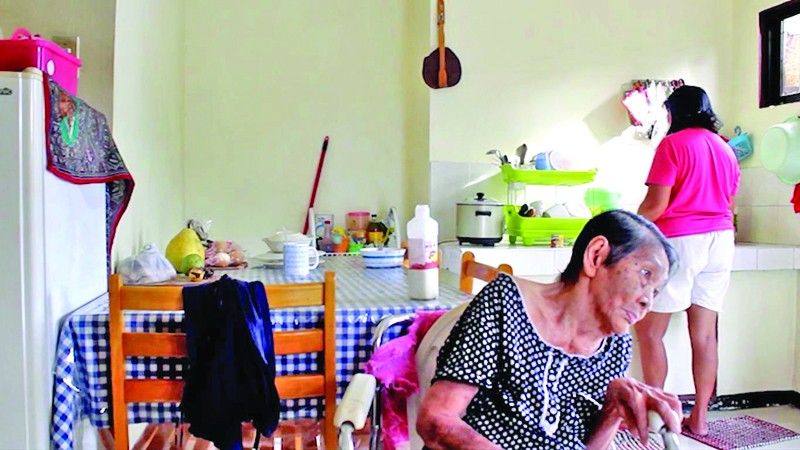 JOANNA Mae Padua's "Once Upon A Bedtime Story" is a documentary that speaks about caring for our grandparents. Being a personal narrative, the docu serves as the filmmaker's memory of her grandmother.

Shot without the knowledge of Joanna's mother, who plays a major part in the film, it speaks of our responsibilities to our ageing parents, and is a subtle reminder that all of us will become old and helpless that is if we don't die first.

The documentary opens with a black screen with just the voices of Joana, the filmmaker and her mother (Lerma Padua).

Joanna asks her mother the reason she would take care of her grandmother (Gleceria Evangelista).

"I take care of her because she's my mother. No other person would do that. It's every child's responsibility to take care of their mother when they get old," Lerma replies to Joanna, who asked why she takes care of her (Lerma's) mother (Gleceria Evangelista).

The conversation continues with Joanna asking about Gleceria's condition, the children's responsibilities over their parents, and death.

Revolving around a contemplative conversation between a mother and daughter, the documentary is set in their bedroom. While it is about them, it also speaks of every Filipino, of every Asian, who are taught early in life to take care of their parents in their twilight years.

As Lerma says, "My purpose is to give back the love she gave me. She took care of me. I was reared by my loving mother all my life. Now, it's time to show her how much I love her."

Gleceria is bed-ridden and is suffering from Alzheimer's disease. While other members pitch in, Lerma is the one who takes full care of her mother and insists that she never gets tired of this. But in the later part of the story, Lerma admits that she'd rather die than be a burden to her children, hinting at the cumbersome role of taking care of an invalid elderly person.

"We will take care of you," Joanna insists and Lerma remains hopeful that her children will reciprocate the love and care she gave them when they were young.

It may be an Asian tradition to take care of elderly family members, but this has not been so in many developed and developing Asian countries. Elderly care facilities are becoming common as work and other obligations keep the brood busy. But the sad state of social security, patchy health insurance, and increasing reluctance of many to take care of their ageing parents leave many elderly in misery.

Younger family members are passing the burden to the state as the latter scrambles to create social security programs for the elderly population. One scene shows Lerma hoping to avail of the benefits that government is working out for senior citizens.

There is an effort to amend the Republic Act 10868 or the Centenarians Act of 2016 where senior citizens would receive some amount from government even before they reach 100 years old.

The filmmaker uses wide to medium shots to capture the rawness of the scenes inside their home. Its simplicity makes it more genuine and the singing of lullaby towards the end of the film creates a heartwarming feeling.

During the Q and A portion of the Salamindanaw Asian Film Festival 2019 where this movie was screened, Joanna explained that she hid the camera during the shoots and thus captured candid conversations that speak of their reality.

The film, she said, was made not just to comply with an academic requirement but aims to tell a story that resonates with many. (Genory Vanz S. Alfasain/Contributor)