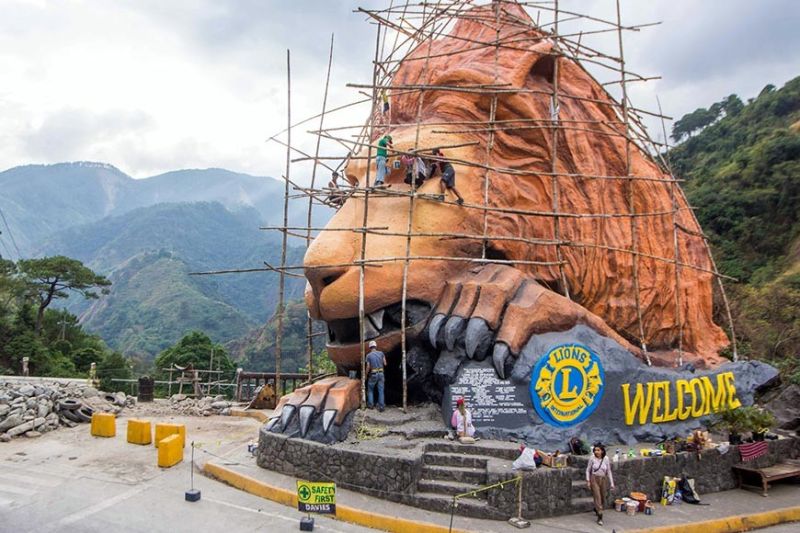 BAGUIO. Almost reaching the golden age of 50 since it was unveiled to the public in 1972, Baguio’s iconic lion’s head is undergoing a total makeover. The 40-feet structure started its makeover December 2019 were 10 artists work on the lion’s head led by Silvino Dulnuan, the head artist who also painted the Pamana mural along Nagulian Road. (Jean Nicole Cortes)

DEPARTMENT of Tourism Secretary Bernadette Romulo-Puyat cleared speculations on the closure of the country’s summer capital to give way for the rehabilitation of the city.

“How could you close Baguio City? It’s quite difficult and even in our talks with Mayor (Benjamin) Magalong, we never talked about it so how can you close Baguio. Instead, we will be rehabilitating Burnham Park,” Puyat said during the memorandum of agreement (MOA) signing for the rehabilitation of Baguio City at the Presidential Mansion.

The tourism secretary said rehabilitation of the city will start with the facelift of Burnham Park amounting to P480 million.

Interior and Local Government Secretary Eduardo Año who was present during MOA signing said although Baguio City will be affected with the rehabilitation works, the end result will still be felt by the residents themselves.

“Over the years, the influx of tourists and visitors alongside with the development and progress left a multitude of problems and massive destruction to the environment. We have seen the effects in terms of air and water quality and the congestion affecting local communities in Baguio and its adjacent towns. Yes, it is disheartening to witness that this city is slowly losing its vibrancy and serenity. That is why I laud Mayor Magalong for answering the call to rescue the city from its evidently deteriorating state. Baguio City and Boracay have a very big difference, and the efforts of Mayor Magalong and the local officials were undaunted to take the lead and initiative to strategize as well as rethink efforts to save Baguio from the alarming conditions,” Año said.

In his message to the residents of Baguio City delivered by Department of Environment and Natural Resources Assistant Jesus Salazar, Roy Cimatu assured Baguio will not be closed before and during rehabilitation of the city.

The city chief executive disclosed he had initial meetings with Cimatu and Año to get the attention of President Rodrigo Duterte on the possible issuance of appropriate order mandating the partial rehabilitation of the city through the proposed one-year moratorium on the put up of buildings and the cutting of trees in exchange for funds to implement the desired rehabilitation of the city’s existing sewerage system.

Magalong admitted it will be challenging to totally close Baguio just like what happened to Boracay as it will be difficult to prohibit tourists coming to the city aside, and also because the city is the gateway to other parts of the Cordillera.

The Baguio sewerage treatment plant currently operates at 12,400 cubic meters daily way above its normal operating capacity of only 8,600 cubic meters, needing an urgent rehabilitation considering the increase in the number of houses in the city which has reached over 90,000.