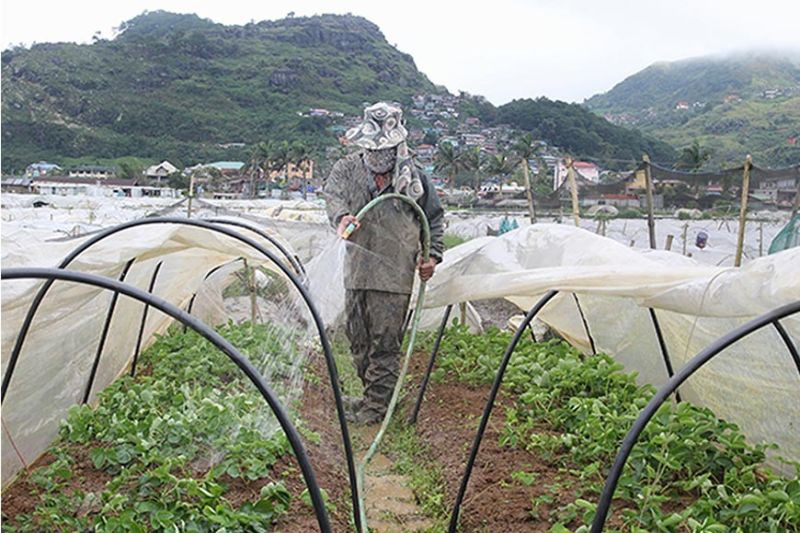 A farmer at the La Trinidad strawberry farm waters strawberry plants in preparation for the strawberry season which starts on December until March. (Photo by Jean Nicole Cortes)

The city chief executive was talking about key problems of the city which include air quality, water supply and solid waste management when he cracked the comment which sent laughter, giggles, and disdain over the strawberry products of the town.

The comment drew laughs from the esteemed panel of guests from the national government as well as the audience which included La Trinidad Mayor Romeo Salda and Benguet Governor Melchor Diclas.

Diclas left the meeting after a few minute while Salda stayed.

Magalong was advocating additional space in the sewerage treatment plant which currently operates at 12,400 cubic meters daily way above its normal operating capacity of only 8,600 cubic meters pursuant to its design needing an urgent rehabilitation considering the increase in the number of houses in the city which has reached over 90,000.

But Salda was quick to disprove Magalong saying there are no irrigation from Balili River going to swamp area where strawberry farms are.

"We have source from creek from Pico and Puguis but none from Balili River," Salda told SunStar Baguio.

Balili River remains polluted due to illegal waste discharge which spans from Kilometer 3 to 6.

Due to the ailing state of the river, the Balili River System Coalition was created which composed of the City of Baguio, La Trinidad and Sablan and the province of Benguet, Environmental Management Bureau (EMB)-Cordillera Administrative Region (CAR), private sector, academe and civil society groups.

Salda added the city mayor in a text message apologized regarding the matter.

"My apologies if you felt slighted with my pronouncement regarding Balili River and our strawberry farm. I believe it was uncalled for. I will make amends," the text message reads.