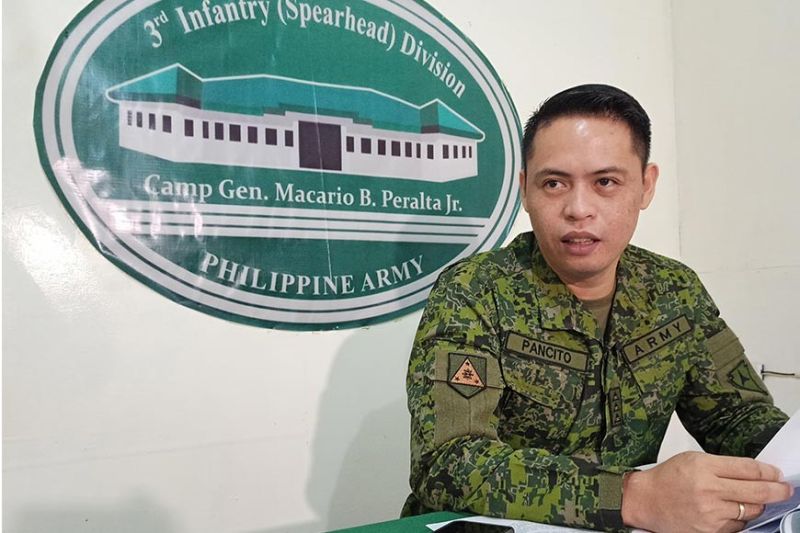 “TOTAL eradication of the armed division of the Communist Party of the Philippines-New People's Army (CPP-NPA) in 2020 in the area of responsibility of the 3ID.”

This is a firm statement of Captain Cenon Pancito III, spokesman for the 3rd Infantry Division (3ID) of the Philippine Army.

"We have already accounted that this group is going down, they are few in numbers," Pancito said during a press conference on Friday, January 10, 2020 at the 3ID Public Affairs Office (PAO), Camp Martin Delgado in Iloilo City.

For Panay Island, he said the Eastern Front Committee of the Communist Kilusang Rehiyon-Panay operating in the areas of President Roxas in Capiz and Carles in Iloilo, is "official down" based on the documents the army has gathered.

He said the Southern and Central fronts in Panay will soon be gone like the Northern front that does not exist anymore.

"We hope that we could finish the job within the year with the help of our local government units (LGUs) and the different agencies of our government," the army spokesman said.

Pancito also said one of the mandates of the NPA is to conduct tactical operations against government forces.

"We have to preempt the plan of the CPP-NPA to conduct tactical offensives against our government. How we do it? We have to go back to our tools," he said.

The tool the army is referring to has been proven effective in 2019 and is the focus of military operations and relentless pursuit operations in the area of the 3ID.

(We will spare no time for these groups to commit corruption against our citizens.)

He said the national leadership of the CPP-NPA is doing steps to prolong the conflict."...hindi para ma achieve ang kapayapaan. (not for the sake of peace)," Pancito said.

"That is what our evaluation now, na ang national leaders nila are not really sincere in giving peace to this country but just to advance their selfless desire to prolong this war against the government," he said.

Pancito added that if the CPP-NPA wants to end the insurgency they should come to the issues the people will accept.

"If we cannot be sure to zero their numbers, we will reduce them in such that they will not be considered as a basic organization which is a front of the NPA by reducing their strength," he said.

President Rodrigo Duterte’s Executive Order (EO) 70, which seeks to institute a “whole of nation approach” in addressing communist insurgency, Pancito said, has really proven its worth in fighting the communist armed conflict.

However, the army spokesman also revealed that there are two mayors in Panay Island made bold remarks that they are not declaring CPP-NPA as a persona-non-grata which is defined as a person who is unacceptable or unwelcome.

"While there is no directive in the part of the government, this would somehow show that they are not inclined to supporting EO 70. I believe the Department of Interior of Local Government (DILG) has made recommendations of suspending these government officials," he said.

Pancito would not reveal the towns or names of these two mayors but said they are from the province of Aklan in Panay Island.

He said the army is open for talks at the local level for surrender to achieve peace and order in the areas of the 3ID.

Western and Central Visayas are the areas of responsibility of 3ID that include the big Visayas islands of Panay, Negros, Cebu and Bohol.