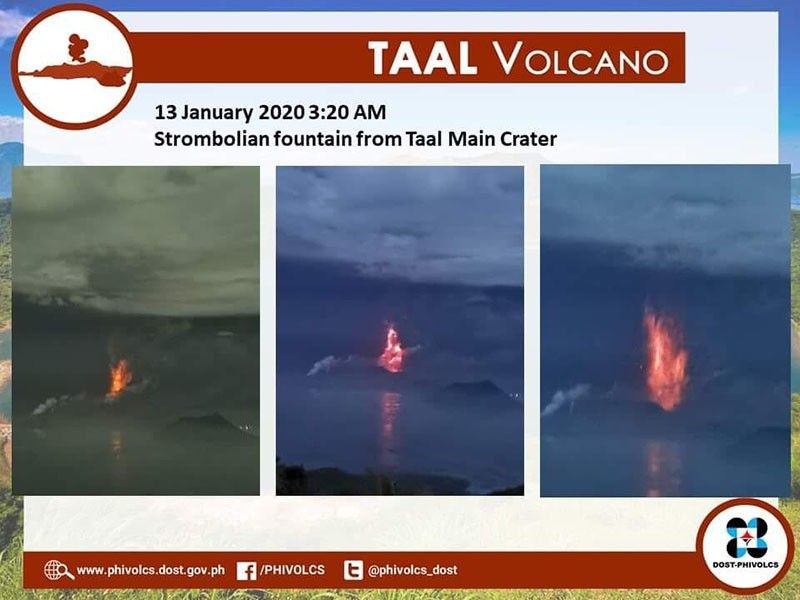 RED-hot lava gushed out of Taal Volcano Monday morning, January 13, 2020, after a sudden eruption of ash and steam that forced villagers to flee and shut down Manila's international airport, offices and schools.

Alert Level 4 still remains in effect over Taal Volcano as of 8 a.m. Monday, the Philippine Institute of Volcanology and Seismology (Phivolcs) said.

Phivolcs has warned the public that hazardous explosive eruption is possible within hours to days.

The government's disaster-response agency reported about 8,000 villagers have moved to at least 38 evacuation centers in the hard-hit province of Batangas and nearby Cavite province, but officials expect the number to swell with hundreds of thousands more being brought out of harm's way.

The state seismic network has recorded a total of 75 volcanic earthquakes in Taal region as of 5 a.m. Monday, 32 of these were felt with intensities ranging from Intensity II-V in Tagaytay City, Cabuyao, Laguna, Talisay, Alitagtag, Lemery and Bauan, Batangas.

Affected residents are advised to use N95 grade facemasks or wet cloth or towel.

Motorists are advised to drive with extreme caution as ash can cause poor visibility and when wet, can make roads slippery.

Phivolcs strongly reiterates the total evacuation of the Volcano Island and high-risk areas within 14-kilometer radius from the Taal main crater.

Civil aviation authorities have advised aircraft to avoid airspace around Taal Volcano as airborne ash and ballistic fragments from the eruption column pose hazards to aircraft.