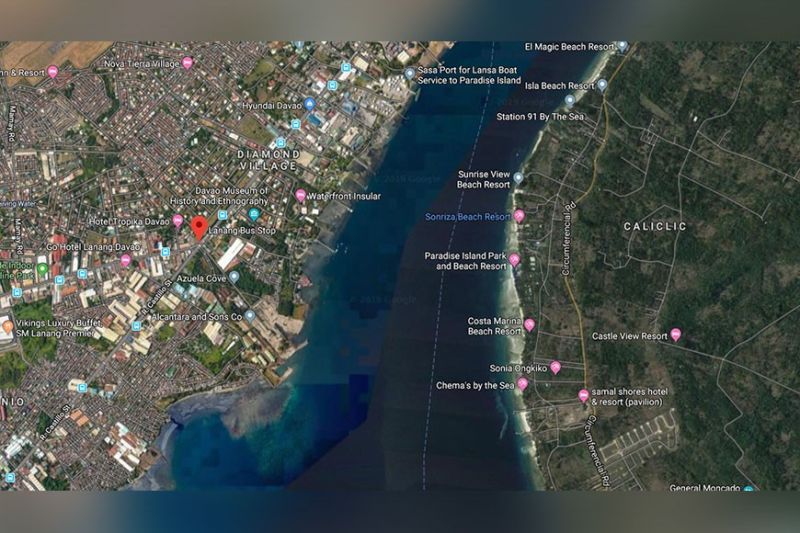 THE camp of a business owner, whose property will be directly affected in the Samal Island-Davao City Connector (SIDC) Project (Davao-Samal Bridge), is asking to realign the bridge's route, an official from the Department of Public Works and Highways (DPWH) revealed.

Hashim, however, requested not to disclose their identity so as not to affect their ongoing negotiations with them.

"We have conducted a series of negotiations, but until now they have not yet been convinced as they are asking so many documents," Hashim said in a phone interview.

He said they are planning to have another talk with them.

The official, however, clarified that the affected family, in the letter, said they are not opposing the planned construction of the Davao-Samal Bridge.

"To be fair, they actually said they are 'pro-progress', and they are not against the bridge. But they are requesting it to be placed in another area," Hashim said.

However, he said the family's request "might be very hard" to be considered as of now, since the connecting route which was determined as "the shortest and best route" among the five original routes considered for the bridge, was already approved by the National Economic and Development Authority (Neda)-Investment Coordination Committee (ICC).

According to the City Planning and Development Office (CPDO), the proposed Davao-Samal Bridge has an approximate length of 2.80 kilometers, traversing from R. Castillo in Agdao, Davao City to Brgy. Caliclic, Babak, Island Garden City of Samal (Igacos) in Davao del Norte.

Hashim said DPWH, the project implementor of the bridge, did not intend to cross any property for the road right of way, adding the route was only finalized in December last year.

"The road right of way, just like any government project, has always been an issue," Hashim said, adding the agency is still looking "at all means on how they would be able to be convinced in the negotiation."

Meanwhile, despite the opposition, Hashim said they are "optimistic" that the issue will be settled to catch up with the timeline of the implementation.

According to Neda-ICC, the project shall be implemented from 2020 to 2024, with construction period scheduled from 2021 to 2024, while operation will be from 2025 onwards.

Hashim said they are currently under "procurement stage," wherein the detailed engineering is expected to commence March this year.

He said DPWH had always been compliant in the process including consulting affected property owners.

Davao City Mayor Sara Duterte-Carpio, in a previous report, said a family filed a complaint letter to DPWH opposing the construction of the bridge, which had long been envisioned.

The mayor added the family is planning to file a “Writ of Kalikasan” before the Court.

“We can expect there is a delay for this project,” Duterte-Carpio said.