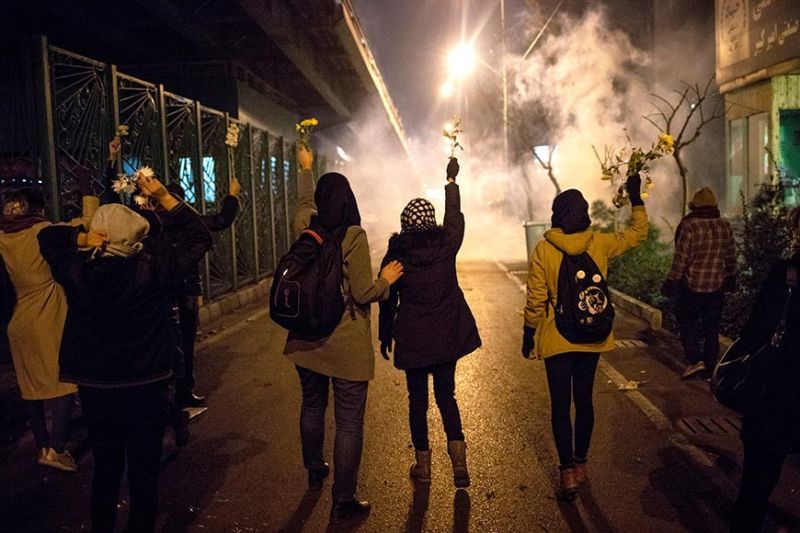 IRAN. In this photograph taken Saturday, January 11, 2020, protesters hold flowers as tear gas fired by police rises at a demonstration in front of Amir Kabir University in Tehran, Iran, to remember victims of a Ukrainian airplane shot down by an Iranian missile. On Monday, January 13, online videos purported to show that Iranian security forces fired both live ammunition and tear gas to disperse demonstrators protesting against the Islamic Republic's initial denial that it shot down a Ukrainian jetliner. (AP)

DUBAI, United Arab Emirates — Popular anger swelled Monday, January 13, 2020 in Iran over the accidental shootdown of a Ukrainian jetliner and the government's attempt to conceal its role in the tragedy, as online videos appeared to show security forces firing live ammunition and tear gas to disperse protests in the streets.

Iranians, already suffering under crippling United States (US) sanctions, expressed shock and outrage over the plane crash that killed scores of young people. They also decried the misleading statements from top officials, who only admitted responsibility three days later in the face of mounting evidence.

The country began last week engulfed in mourning after a U.S. drone strike killed General Qassem Soleimani, who led Iran's regional military interventions. Then on Wednesday, January 8, it responded with a ballistic missile attack on two bases housing US troops in Iraq, although there were no casualties. Hours after that barrage, as it braced for a US counterattack that never came, Iranian forces accidentally shot down the Ukraine International Airlines jetliner, killing all 176 people aboard shortly after it took off from Tehran for Kyiv.

For a growing number of critics — from ordinary citizens to notable athletes and artists — the events have revealed a government that is incapable of following through on its incendiary rhetoric and willing to mislead its own people about a national tragedy in order to avoid embarrassment.

Those sentiments first boiled over late Saturday, January 11, shortly after the Revolutionary Guard admitted shooting the plane down by mistake. A candlelight vigil at a university rapidly turned into an anti-government demonstration.

“They are lying that our enemy is America! Our enemy is right here!” students shouted.

Videos sent to the New York-based Center for Human Rights in Iran and later verified by The Associated Press show a crowd of demonstrators near Azadi Square fleeing as a tear gas canister lands among them. People cough and sputter while trying to escape the fumes, with one woman calling out in Farsi: “They fired tear gas at people! Azadi Square! Death to the dictator!”

Another video shows a woman being carried away in the aftermath of the violence, a trail of blood visible on the ground. Those around her cry out that she has been shot in the leg.

“Oh my God, she’s bleeding nonstop!” one person shouts. Another shouts: “Bandage it!”

Photos and video after the incident show pools of blood on the sidewalk.

“Police treated people who had gathered with patience and tolerance,” Iranian media quoted Rahimi as saying. “Police did not shoot in the gatherings since broad-mindedness and restraint has been the agenda of the police forces of the capital.”

The semi-official Fars news agency reported that police had “shot tear gas in some areas."

Fars, which is close to the Revolutionary Guard, carried videos purportedly shot Sunday night showing demonstrators chanting: “We are children of war. Fight with us, we will fight back.” Another Fars video showed demonstrators in Tehran tearing down a poster of Soleimani.

On Sunday, authorities deployed forces across Tehran — police, members of the Revolutionary Guard on motorcycles and plainclothes security men. The heavy security presence continued into Monday, when protests were largely confined to universities and there were no reports of clashes.

President Donald Trump has openly encouraged the demonstrators, even tweeting messages of support in Farsi and warning the government not to fire on them. German Foreign Minister Heiko Maas tweeted that “we are following the protests in Tehran very attentively,” adding that Iranians “have a right to free expression without repression and persecution."

But earlier, larger waves of protests going back to the 1979 Islamic Revolution have been crushed by security forces. Amnesty International says more than 300 people were killed in November during days of protests sparked by an increase in gasoline prices.

Most of the people aboard the Ukraine International Airlines jet were Iranians and Iranian-Canadians. For three days, Iranian officials ruled out any attack on the plane, suggesting the crash of Flight 752 was caused by a technical failure. Only on Saturday did authorities acknowledge shooting it down, as evidence mounted and after Western leaders accused Iran of culpability.

The United Nations agency that regulates civil aviation said it had accepted an invitation from Tehran to provide “expert advice" to the crash investigation. The Montreal-based International Civil Aviation Organization said in a statement it had appointed senior and technical staff to serve as advisors and observers. It did not elaborate.

Several activists in Ukraine rallied in front of the Iranian Embassy in Kyiv on Monday, expressing solidarity with protesters and condemning Iran's “dictatorship."

The European Union's aviation agency has since advised carriers against overflight of Iran “at all altitudes” until further notice. Several airlines have already canceled flights to and from Iran and rerouted flights to avoid Iranian airspace.

Ali Rabiei, a government spokesman, insisted Iran's civilian officials learned only on Friday, January 10, that the Revolutionary Guard had shot down the plane. The Guard answers directly to Supreme Leader Ayatollah Ali Khamenei.

“The point is that we did not lie,” Rabiei said. He went on to blame the US for “spreading the shadow of war over Iran.”

Ebrahim Raisi, the head of Iran's judiciary, issued a warning to protesters, saying “the agents of America and agents of foreign countries” want to use anger over Flight 752 to “compromise” Iran’s security. Iran often blames anti-government protests on foreign conspiracies.

On Saturday, Iranian authorities briefly arrested British Ambassador Rob Macaire, who said he went to the candlelight vigil to pay his respects and left as soon as the chanting began.

Iran's Foreign Ministry summoned the British ambassador Sunday to protest what it said was his presence at an illegal protest. Britain, in turn, summoned Iran's ambassador on Monday “to convey our strong objections” over the weekend arrest.

“We are seeking full assurances from the Iranian government that it will never happen again,” he said.

In addition to the street protests, Iran's government has also faced harsh criticism from prominent artists, athletes and journalists.

A number of artists, including famed director Masoud Kimiai, withdrew from an upcoming international film festival. Two state TV hosts resigned in protest over the false reporting about what happened to Flight 752.

Taraneh Alidoosti, one of Iran's most famous actresses, posted a picture of a black square on Instagram with the caption: “We are not citizens. We are hostages. Millions of hostages.”

Saeed Maroof, the captain of Iran’s national volleyball team, also wrote on Instagram: “I wish I could be hopeful that this was the last scene of the show of deceit and lack of wisdom of these incompetents but I still know it is not.”

He said that despite Iran's national team qualifying for the 2020 Tokyo Olympics after years of effort, “there is no energy left in our sad and desperate souls to celebrate.” (AP)