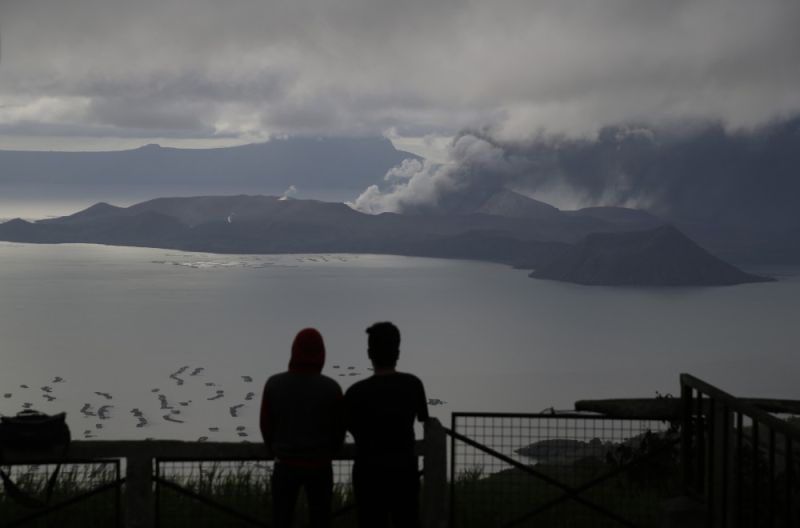 TAGAYTAY. Men watch from Tagaytay, Cavite province, as Taal Volcano continues to spew ash on Tuesday, January 14, 2020. Thousands of people fled the area through heavy ash as experts warned that the eruption could get worse and plans were being made to evacuate more. (AP)

THE Philippine Institute of Volcanology and Seismology (Phivolcs) observed cracks across the road connecting Agoncillo to Laurel, Batangas and appearance of new fissures in villages and municipalities near the Taal Volcano.

As of 1 p.m. Tuesday, January 14, Phivolcs said in its advisory that new fissures and cracks were documented in villages of Sinisian, Mahabang Dahilig, Dayapan, Palanas, Sangalang and Poblacion in the municipality of Lemery.

There are also reported new cracks in the village of Pansipit in Agoncillo; Poblacion 1, Poblacion 2, Poblacion 3, Poblacion 5 in Talisay town and Barangay Poblacion in the municipality of San Nicolas.

Seven volcanic earthquakes were felt ranging from Intensity 2 to Intensity 4 in Tagaytay City. The Philippine Seismic Network recorded a total of 49 earthquakes in Taal areas from 2 a.m. to 10 a.m. on Tuesday.

"The intense seismic activity coupled with fissuring on the caldera region likely signifies continuous magma intrusion beneath the Taal edifice, which may lead to further eruptive activity," the Phivolcs stated.

Taal Volcano remained on Alert Level 4 Tuesday, which means that hazardous explosive eruption is possible within hours to days.