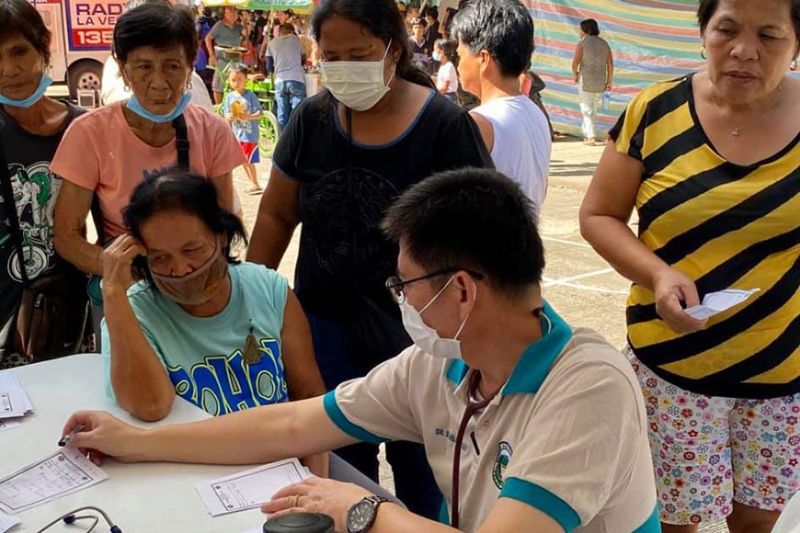 PAMPANGA. The Pampanga Medical Team led by provincial health officer Dr. Marcelo Jaochico in action at the Batangas Provincial Sports Complex, Barangay Bolbok, Batangas City where free check-ups and medicines are being given to 3,952 evacuees. (Photo courtesy of CLTV36)

SEVERAL personnel and vehicles of the Pampanga Provincial Government are now helping with the evacuation and other disaster preparations in Batangas as Governor Dennis Pineda led a contingent of Kapampangans to assist in the situation following the eruption of Taal Volcano.

Pineda had brought in medical teams, social workers, and search and rescue personnel who, along with the governor, will serve in the area for an indefinite period.

Taal Volcano has been blasting into the air since Sunday afternoon, January 12, 2020 and has crippled parts of Central Luzon, Calabarzon and Metro Manila.

Classes in all levels in Pampanga were again suspended in Pampanga, January 14.

Aside from the manpower, Pineda also brought in equipment to help in the evacuation of residents affected by the eruptions of the Taal Volcano.

The governor had also coordinated with Batangas Provincial Disaster Risk Reduction Management officer Joselito Castro for the on-going rescue missions which will be participated by Pampanga personnel.

“We, Kapampangans, are paying back. Noon pong pumutok ang bulkang Pinatubo, marami po ang tumulong sa amin para iligtas kami at makabangon. Ito hong pagtulong ay pasasalamat namin (We, Kapampangans, are paying back. When Mt. Pinatubo erupted in the past, a lot of people came to help us. And we are returning the favoring by sending aid),” Pineda said.