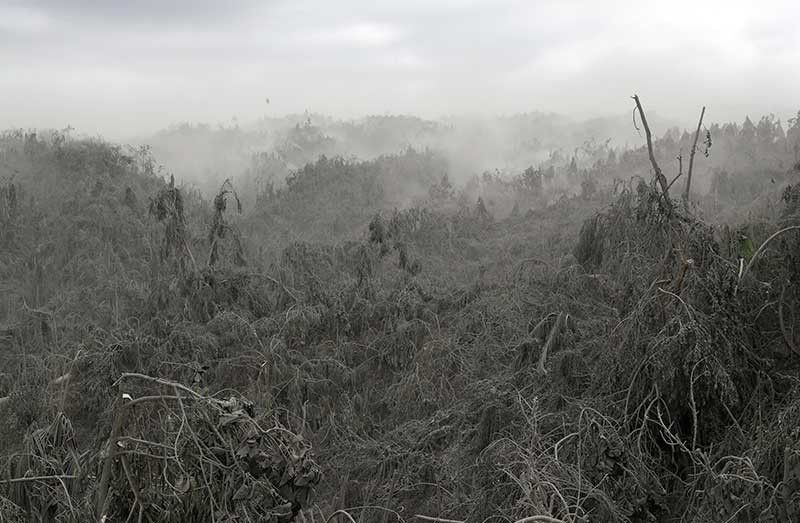 OVER P74 million worth of agricultural products were destroyed in the provinces of Batangas and Cavite following the phreatic and magmatic explosion of the Taal Volcano over the weekend, the National Disaster Risk Reduction and Management Council (NDRRMC) said on Wednesday, January 15.

The volcano remained under Alert Level 4, which means a hazardous explosive eruption is imminent within hours or days, the Philippine Institute of Volcanology and Seismology (Phivolcs) said.

"For the past 24 hours, Taal Volcano’s activity has been characterized by continuous but generally weaker eruption of the Main Crater due to magmatic and hydrovolcanic processes," Phivolcs said in a bulletin released at 8 a.m. Wednesday.

Phivolcs officer-in-charge Renato Solidum Jr. said weaker eruption is a normal episode in volcanic activities but it does not mean that it will no longer explode.

Phivolcs said the fissures and cracks reported in at least 76 barangays signify the possibility of a strong eruption.

In its 6 a.m. Wednesday update, the NDRRMC said Batangas reported damage of P69,280,500 worth of corn, coffee and livestock while Cavite said it incurred damage of P5,628,800 worth of the same products.

Batangas was declared under a state of calamity on January 13, a day after Taal Volcano went into intense unrest and spewed steam-laden plumes and lava fountains.

The disaster council said that as of Wednesday, 12,468 families or 53,019 persons were affected by the calamity in the two provinces.

Of the total, 10,000 families or 43,681 persons were taking temporary shelter in 217 evacuation centers provided by the local government units of Batangas, Cavite and Laguna.

Residents of Agoncillo, Laurel and Talisay are prohibited from returning to their homes. Some residents who insisted on going back to recover some personal belongings were escorted by the police to ensure they would not linger.

The Department of Social Welfare and Development (DSWD) and the Department of Health (DOH) have provided a total of P4.97 million worth of relief assistance to the affected families.

Meantime, the NDRRMC said that as of January 14, all national road sections in Calabarzon (Cavite, Laguna, Batangas, Rizal and Quezon), which were badly affected by the volcano eruption, were already passable.

Phivolcs said it has recorded 466 volcanic earthquakes from the Taal Volcano. Of these, 156 were felt.

A fissure which cut across a road that connects the towns of Agoncillo and Laurel also appeared following the eruption. (SunStar Philippines)