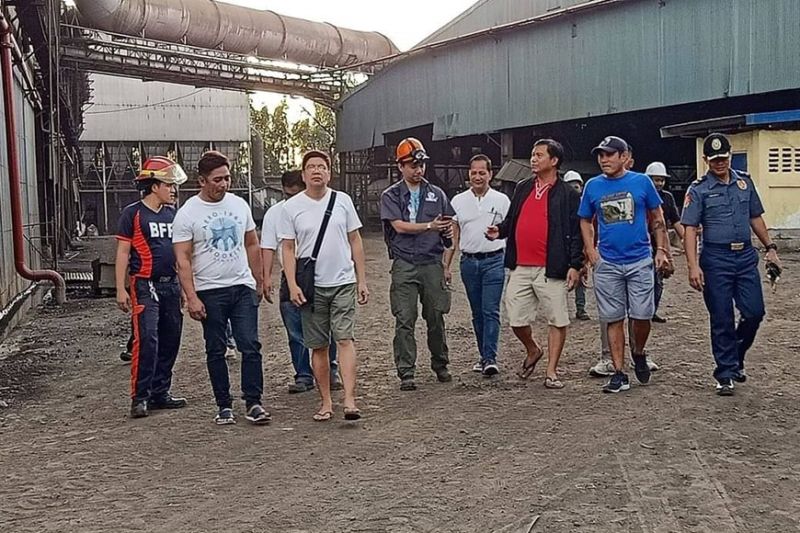 PAMPANGA. Mayor Abundio "Jun" Punsalan, Jr. (in red shirt) leads the inspection of SKK Steel Plant a day after it exploded. Accompanying him are personnel of BFP, PNP and Joint Inspection Team of the local government. (Contributed photo)

THE operations of SKK Steel Corporation in San Simon town has been temporarily suspended following the explosion in its compound that injured seven persons.

Mayor Abundio "Jun" Punsalan, Jr. ordered the immediate shutdown of the said steel plant located along Quezon Road until the company is able to complain the lack of occupational safety measures on its workplace.

Punsalan said the steel plant owner is yet to communicate with the local government amid the ongoing investigation conducted by the Bureau of Fire Protection (BFP).

"No business operations shall be conducted inside the plant until a final report BFP will be released, and a subsequent order from the local government will be issued based from it," he said.

Punsalan the cites human error caused the explosion based on initial report of BFP and his personal assessment from his visit inside the plant a day after the incident.

He disclosed that the explosion was sparked by a gas leak from the hose connected to liquified petroleum gas tank inside the plant's production area.

"Based on the report, there was a gas leak on the hose and the worker manually cut and reconnected the hose to remove the damaged part. He did it while on operation and suspectedly without safety gears," he said.

Punsalan said the management may be held liable for its non-compliance of the occupational safety measures and the local fire code.

A thorough review on the safety measures and facilities inside the plant will also be conducted before the local government issues a new business permit to the steel plant after its existing one expires on January 20.

Punsalan disclosed that it was the first time such incident transpired in SKK Steel Plant since it started operations some 30 years ago in the then ghost town-like Quezon Road.

"Hopefully, they will be able to address the problem and comply with the requirements of the government, especially on the safety of their employees, because they are one of the oldest industrial plants in our town," he said.