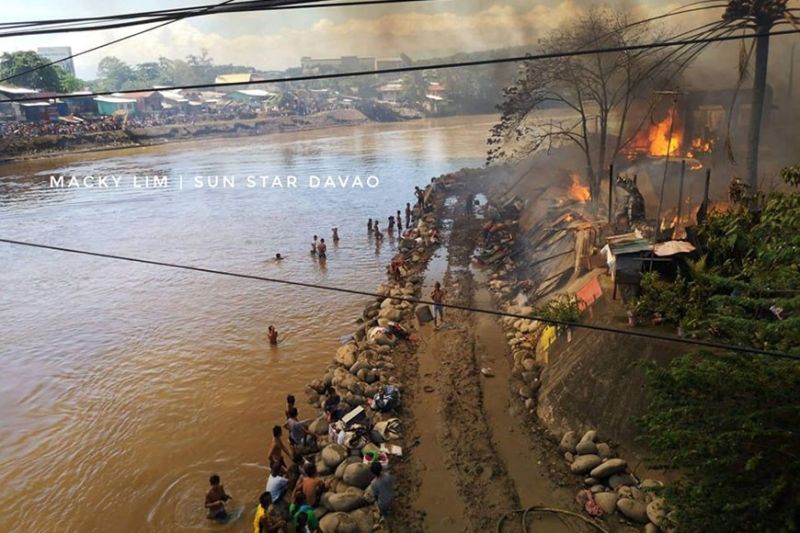 RIVERSIDE FIRE. Residents of Barangay 5-A Bankerohan in Davao City take refuge at the newly-reclaimed portion of the Davao River as huge fire raze 60 houses yesterday morning, January 15. The damage was pegged at P630,000, according to the Bureau of Fire and Protection Davao. (Photo by Macky Lim)

FIREFIGHTERS braved the heat to contain the fire that razed around 60 residential houses at Rayco, Purok 2, Bankerohan Riverside in Barangay 5-A, Davao City on Wednesday, January 15, which reached up to third alarm.

Several residents became homeless after their houses were engulfed by the massive fire that struck yesterday morning. Because of the number of residential houses being razed, additional firetrucks were advised thrice to put out the fire.

Senior Fire Officer 2 (SFO2) Ramil Gillado, BFP Davao chief of the intelligence and investigation section, said the probable cause of the fire is still under investigation. However, based on their initial information, it was possible that the fire broke out after a ceiling fan overheated.

The Bankerohan Bridge was closed to traffic to give way for the firetrucks since the area of the fire was just under the bridge.

The fire was put under control at around 11:53 a.m. with no reported fatalities. However, one civilian was reported to have sustained injury.

As of Wednesday, BFP Davao has recorded a total of 26 fire incidents in Davao City.