No halt in veggie trade 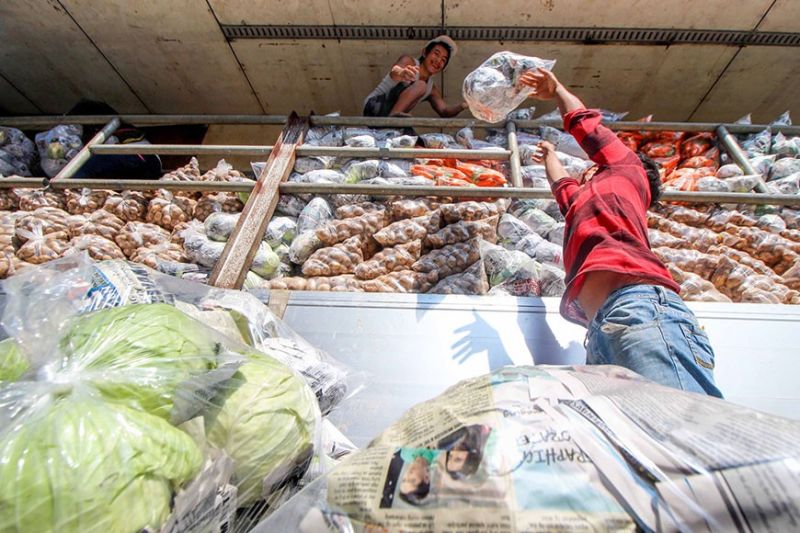 LA TRINIDAD. The La Trinidad Vegetable Trading Post releases vegetables to be sent to Divisoria, Manila. Delivery of vegetables will continue even during the Feast of Sto. Niño in Tondo from January 17 to 19. (Photo by Jean Nicole Cortes)

In a meeting with Manila Mayor Isko Moreno, the readiness of Manila public markets to receive vegetables and even flowers from the province was sealed.

In a dialogue on Wednesday, January 15, Moreno made the promise to Benguet Governor Melchor Diclas and traders saying sale of vegetables from the highlands will continues even during the Feast of Sto. Niño in Tondo, Manila from January 17 to 19.

“Lahat naman ay welcome sa Maynila. What we are asking them is to have self discipline, kasi iyong basura talaga kami sasalo, iyong pinagtabasan (trimmings) ng repolyo, carrots, sibuyas, sayote, labanos which we don’t complain because, one, we want to support other parts of Luzon na naghahanap buhay sa Maynila,” he added.

(All is welcome in Manila. What we are asking from them is to have self discipline, because we will have to clean their trash, their trimmings of cabbage, carrots, onions, chayote and radish, which we don’t complain because, first, we want to support traders from the other parts of Luzon who have business in Manila.)

Traders and vegetable farmers in Benguet earlier appealed to Moreno not to pursue the three-day closure of Divisoria claiming it would hamper the delivery of vegetable affecting heavy losses to farmers and traders.

La Trinidad Mayor Romeo Salda then scheduled a talk with the Manila mayor to discussed matters and make clarifications on the appeal of the traders and farmers.

The governor added at least 30 trucks of vegetables from La Trinidad Vegetable Trading Post, Benguet Agri Pinoy Trading Center are being delivered in Divisoria, which is one of the big markets in Manila. Moreno stated there are at least 17 public markets aside from supermarkets.

He also urged for cleanliness and fast paced collection of trimmings right after they are delivered to the key markets.

The feast of Sto. Niño in Tondo, the most populous district in the city, is celebrated every third Sunday of the month.