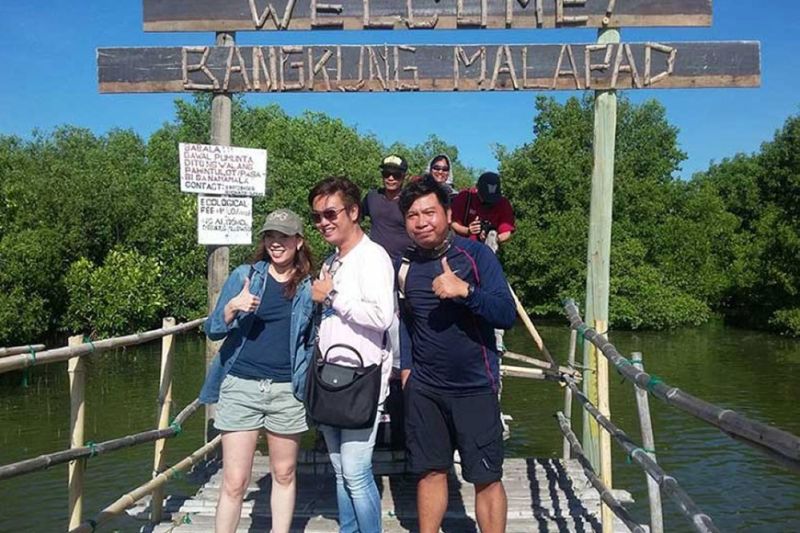 Glenda, a Category 5 super typhoon, by then was crossing Central Luzon with maximum sustained winds of 260 kilometers per hour, strong enough to blow away roofs and topple vehicles. And even as the super typhoon made landfall, it sustained its strength and devastated Central Luzon.

Pinlac was then with his family in the coastal village of Batang Dos in the seaside town of Sasmuan situated along the Pampanga Delta which forms part of the northern shore of Manila Bay.

They had packed their clothes along with what little they had in bags and blankets. They huddled with other villagers in a nearby public school which was then deemed safe from the storm surges.

“We thought the waves would get bigger, fortunately they were not as devastating as the ones that hit another coastal village,” Pinlac said.

In the nearby coastal village of Mabuanbuan, the Provincial Disaster Risk Reduction and Management Office tried to evacuate people, but the huge waves prevented rescue teams from reaching the barangay. Fortunately, local officials had evacuated the residents to higher grounds within the same village.

Pinlac, along with other coastal residents and government officials here, credit the village’s good fortune to the thick mangrove trees that have grown on a 13-hectare island a few kilometers away.

The island, named Bangkung Malapad, was formed from the lahar and silt that had been carried by the Pasac River to the mouth of the Pampanga Delta. A few years back, mangroves had begun growing in the area.

Sasmuan town’s tourism officer Jason Salenga said that two barangays in Sasmuan were unharmed by the storm surge because the existing mangroves that served as natural barriers. The mangroves had reduced the impact and height of the waves.

In the past, Sasmuan’s shores were lined with mangrove and nipa forests. The increase in the coastal populations and the shift to aquaculture had depleted much of the mangrove cover, exposing the coastal communities to the risks of storm surges during powerful typhoons.

Such was the gratitude of the coastal communities that in 2014, some 146 hectares were planted with mangrove propagules by residents of Batang Dos on Bangkung Malapad in bid to increase mangrove cover in the area. A total of 648,888 propagules were planted that year.

Recently, Smart Communications and Ericsson launched an innovative program in the area utilizing technological tools to monitor the condition of the mangroves.

The two entities started the Connected Mangroves Project to help protect and monitor the marine ecosystem of Bangkung Malapad. The innovative data gathering technology, which won Ericsson the United Nations Framework for Climate Change award in 2016, makes use of wireless technology to monitor the area and gather data.

This gives stakeholders and the local government in the area access to gather and monitor data and other information in ensuring the survival of the mangroves.

This is done through the use of sensors that monitor water quality and condition. The sensors also monitor soil condition as well as the amount of rain and water level in the area during storms. This also enables coastal communities to prepare in case of possible emergencies. The technology enables for both conservation of the area and as a data gathering tool to alert the local communities.

The technology was first introduced in Malaysia were it was used to effectively monitoring the growth of mangroves. According to the briefer on the said project by Ericsson, 70 to 80 percent of the mangroves grew after only six months of monitoring, as opposed to the 20 to 40 percent that reached maturity prior to the project. This means that locals in Sasmuan can effectively re-forest their mangrove area faster than usual.

The Philippine Atmospheric, Geophysical, and Astronomical Services Administration identified 18 barangays in Pampanga that are prone to storm surges.

In Guagua town, the local officials are using data from years of technological research to address the backflow of water from its river channels and the sea.

Guagua Mayor Dante Torres had initiated the project of rehabilitating the mangrove vegetation of his town’s water channels.

This is in the hope of curtailing backflow of water from channels that drain toward the sea and also to provide home for fish to thrive.

Torres added that mangrove forests will enable the development of small ecosystems for fish life. A kilometer of mangrove forests in fact produces some one ton of fish every year according to studies.

In Masantol town, the technology of floating rafts for garden and vegetable cultivation are now being introduced to coastal communities by Center for Emergency Aid and Rehabilitation, Inc. (CONCERN), CARE Philippines, Tungo sa Kahandaan ng Pilipinas (TUKLAS) in partnership with local stakeholders and government officials of the town.

Residents of the beneficiary communities are now undergoing training for the implementation of the said program.

The Philippine Rice Research Institute made studies on the development and adaptation of floating gardens and found these to be good alternative production systems in the swamp and flood-prone communities.

The technology uses water hyacinths, bamboo and plastic bottles for the creation of plot beds. These plot beds float above the water and are topped with soil and organic fertilizer. The crops are then grown on top of the plot beds.

During the monsoon rains, the gardens merely float above the water and on the dry months, water could be accessed from the remaining floodwater. This means that coastal communities can raise farm produce from the floating gardens regardless of flooding conditions.

Also, as early as 2011, the Japanese non-government group Mirai Ni Kibou Foundation and the Japanese Rotary Club of Ashikaga East, in cooperation with their local counterparts, have been planting mangroves in Masantol town.

This is aside from the mangrove propagation programs of local entities and the municipality. The Bureau of Fisheries and Aquatic Resources (BFAR) said that in 2016 alone around 12,000 mangroves were planted in the shoreline of Barangay Sagrada.

The Japanese and their local counterparts have been planting an average of 200 mangrove trees and 300 nipa palm saplings each year with the aim at promoting the reforestation of much of the coastline and marshes of Masantol, both as an effort to combat climate change and to protect the ecosystem of the area.

The project is also seen as a way of creating natural barriers for the coastal villages against strong winds and storm surges. The program can also help local fishermen as mangrove trees provide spaces for breeding grounds for fish and other aquatic life. Mangrove forests also help in the balance of marine ecosystems and protection of coastline from erosion.

Mirai Ni Kibou Foundation president Joseph Ang said the groups decided to plant nipa as a source of income for the local communities living around and near the mangrove forests here. He said nipa is a good source for roofing for bamboo houses that are typical in coastal communities. Nipa can also yield materials for products like wine and vinegar.

"We hope to contribute to the livelihood of the people here and at the same time promote the importance of these mangrove forests not just to their livelihood but also to their community and the environment," Ang said.