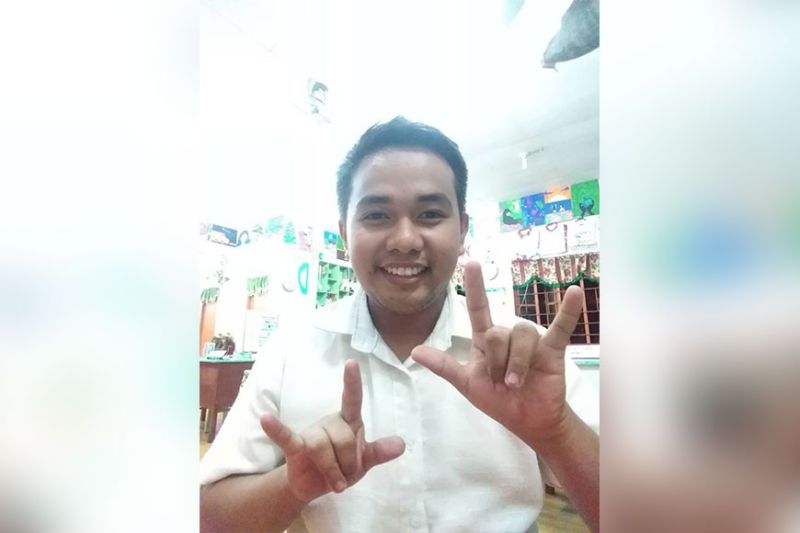 COMMUNICATION, in every human activity, is vital.

Unfortunately, some struggle in expressing themselves and the message they desire to convey, especially those people who have hearing impairment or deaf since birth.

Andrew Paul Salvo, or "Pau Pau" as his friends call him, feels their struggle.

Salvo is an alumnus of the school. He also used to be a volunteer teacher in the center back when he was still in college. While he said many schools had offered him a job, he opted to serve the deaf children, in whom he saw great potential despite their disabilities.

Growing up, he already knew he was meant to serve these kids.

In fact, it runs in the family. His mother is a Sped teacher, while his older sister is the first one to acquire specialization in teaching sign language.

Back then, learning sign language was just his hobby. He then realized it was something more.

"As a sign language teacher, we have a role not just to teach them with the things they need to learn, but also how they will communicate to their parents," Andrew said.

In most cases, parents who have deaf children do not know how to communicate with their child.

"That problem made me realize that as a special education teacher, I need to bridge that communication gap," he said.

His class serves an estimated ten to 20 students. This is far from the 1:5 ideal ratio.

Aside from teaching deaf students, he also caters to those with autism and intellectual disabilities.

There are only few Sped teachers and schools, not only in the city, but in the entire country. But this did not discourage him and his colleagues.

It is tough at first, he said, considering the communication barrier it entails.

"If you are not committed, you would be fed up and quit the job," Andrew shared.

One misconception of teachers, according to Andrew, is the salary, which he said has only a slight difference than those teaching in the normal schools.

He said students having tantrums are one of Sped teacher's challenging things to handle.

"Once you're used to it, you would then know how to deal with these children," Andrew said, recalling being punched by some of his students during his early days.

What he appreciates about them is that they are sincere to their emotions.

Dealing with these kids, he said, was more of a calling than a profession. For him, he sees no difference between special and normal kids.

"They only lost one sense. And that is the sense of hearing. But overall, they are still capable human," Andrew shared.

Apart from being a full time teacher, he is also an active member of the recently-formed Sign Language Interpreters-Davao Region.

This is also in line with Filipino Sign Language (FSL) Bill signed by President Rodrigo Duterte in 2018, wherein government offices are encouraged to observe the usage of sign language to its employees. The law also encourages the offering of sign language as an elective subject in regular and mainstream curriculum of state universities and colleges.

As of now, he said the group continues to reach out to the community to disseminate the importance of learning basic sign language.

One day, he hopes people would further see these people's full potential, rather than the disabilities.

"Learning basic sign language is not only a way for a mutual understanding, but also a way to break communication barriers. There is social inclusivity. They would feel that they are actually part of the community," he said.