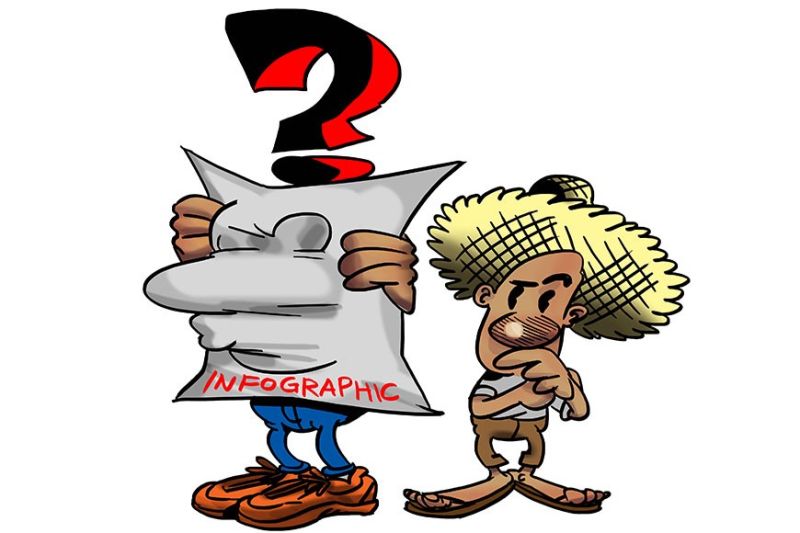 THERE’S a curious infographic that’s making the social media rounds these days. Perhaps you may have seen it. It shows 18 numbers with brief captions—“64 airports” and “2,709 bridges,” as examples—all arranged around the headline “Duterte Legacy.”

First, the plus points. At first glance, it’s a well-designed infographic: clean, concise and memorable. It appears to pack a lot of information in such a small space. And it’s easy to distribute on social media. It even invites supporters to share a photo or video about what they think of this administration’s legacy.

This suggests that in addition to sharing information, the campaign’s goals may also include some faith-building as well. A more critical or skeptical eye would see this as myth-making. No surprise there: the politician who doesn’t invest in image-building at all is a truly rare bird.

There are, however, some aspects of the infographic that could’ve been done better.

First, it offers no information about who’s behind the campaign. It probably is an administration-supported effort. Which agency crafted it? How much in taxpayer pesos, if any, did it cost us? If there’s no transparency, then there’s no accountability either. (They can simply say: We didn’t make that.)

Second, it provides no attribution at all. It doesn’t say where its data came from, which means that citizens who want to unpack the figures and understand these better would have to guess which agency supplied it. I should point out that I’ve seen only one side of the infographic in question. If there’s a flip side that contains notes on the data sources and more context, do let me know. I’d appreciate it.

On Twitter, Philippines researcher Prinz Magtulis (@prinzmagtulis) of the Financial Times has started a thread that asks questions about the claims made in the infographic. His questions are intelligent and necessary and I recommend that you check that thread out if you’re at all concerned about the way our government shares information with us. (Forgive me for nagging, but you should be concerned, regardless of how you voted in 2016 or 2019.)

Magtulis points out, for one, that the graphic reports an unemployment rate of 4.5 percent, the “lowest since 2005” and that all the information on it is “updated numbers as of Jan. 9, 2020.” Socioeconomic Planning Secretary Ernesto Pernia, PhD, made a similar claim in his yearend statement for 2019: “Our unemployment rate dropped from 5.1 percent in 2018 to 4.5 percent this year, the lowest in the last 10 years.”

The difference is, Secretary Pernia had the precision and honesty to say that the figure he cited was as of October 2019. By the Philippine Statistics Authority’s reckoning as of Dec. 20, 2019, two days after Pernia’s statement, the unemployment rate in 2019 hit 5.1 percent, from 5.3 percent in 2018.

That’s a preliminary result, by the way. It’s all too possible the figure changed between Dec. 20, 2019 and Jan. 9, 2020. Call it statistics or call it magic, but that has been known to happen.

You may have also seen by now the reactions to the graphic on social media. Some sound exasperated, yet some still manage to wring some humor out of the situation. The “64 airports” and “2,709 bridges” are sticking points. Did whoever make the graphic want to claim that the administration built 64 airports in the last three years it has been in power, or that it renovated 64 airports? Why isn’t it clearly stated in the infographic? (A more cynical voice pipes up: “Plausible deniability. Duh.”)

When those in power choose creative myths over verifiable facts, pay extra attention. “To abandon facts is to abandon freedom,” Timothy Snyder wrote. “If nothing is true, then no one can criticize power, because there is no basis upon which to do so.”

We can all agree we want a legacy of public service, at all levels of government, that includes real, meaningful progress. I hope we can also agree that such a legacy must be told honestly and carefully and not whipped out of thin air.