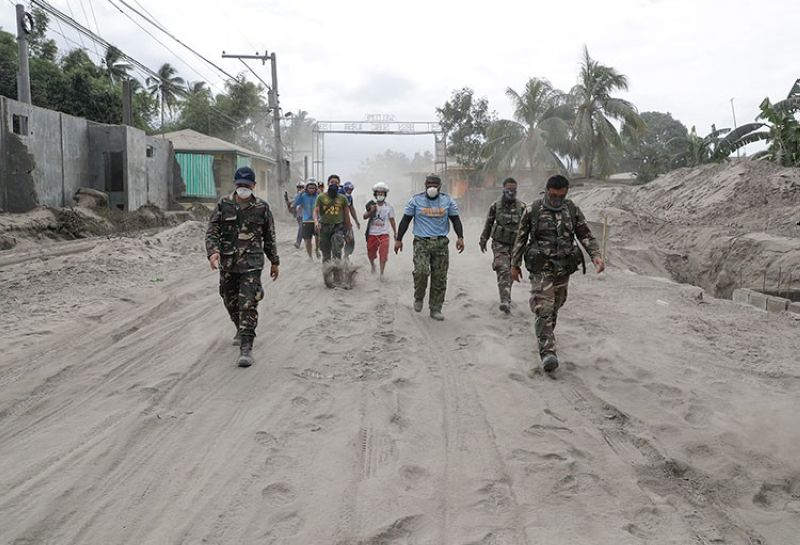 BATANGAS. Police and military men walk along a road covered in volcanic ash at a village beside Taal volcano where residents have evacuated to safer ground in Agoncillo, Batangas province on Saturday, January 18, 2020. (AP)

AGONCILLO, Batangas -- Officials said Saturday they are bracing for a long crisis whether the Taal volcano erupts more disastrously or simmers precariously for weeks or months, as massive numbers of displaced villagers languish in emergency shelters.

Health Secretary Francisco Duque III said more than 900 villagers who fell ill have been treated, mostly for exposure to volcanic ash, in evacuation sites since the volcano began erupting in Batangas province near Manila, the capital, last weekend.

About 125,000 people fled from ash-blanketed villages and crammed into hundreds of emergency centers in Batangas alone and many others took shelter in relatives’ homes, disaster-response officials said, appealing for masks, bottled water, portable toilets, food and sleeping mats.

“It’s really massive because you’re talking of more or less 100,000 evacuees in evacuation centers, so the infrastructure and services needed are really huge,” Duque said. "This is not going to be for the short term, but for the medium if not long term.”

After belching a massive plume of ash and steam more than 15 kilometers (nine miles) into the sky when it rumbled back to life last Sunday, Taal has been spewing smaller emissions and shuddering with fewer earthquakes in recent days. But despite a perceived waning of its restiveness, continuing volcanic quakes, the drying of Taal’s crater lake and other signs indicate magma is moving beneath, said Renato Solidum, who heads the Philippine Institute of Volcanology and Seismology.

“We have this perception now that it’s waning versus underground sub-surface activity, which indicates otherwise,” Solidum said at a news conference, adding that experts “have not seen a definite trend that it’s weakening.”

The 311-meter (1,020-foot) -high Taal is one of the world’s smallest but the second-most restive of about two dozen active Philippine volcanoes. It has remained at alert level 4, the second-highest warning, indicating a hazardous explosive eruption is possible within hours or days.

Duque said hundreds of villagers have been treated for respiratory infections, hypertension, diarrhea, skin lesions, flu and coughs in evacuation centers. About 300,000 masks, including those from regions unaffected by the volcanic eruption, have been sent to calamity-hit areas.

The government’s main disaster-response agency will hold a meeting next week to discuss concerns, including hygiene in evacuation camps, Duque said. He has sought the help of the military to build latrines and repair toilets in emergency shelters, mostly school buildings.

In the hard-hit town of Agoncillo, Mayor Daniel Reyes said all 42,000 residents abandoned their homes, including 8,000 who are now encamped in evacuation centers and need food, water and aid. “They rushed out of their homes without bringing anything, so they will really be dependent on our help,” Reyes said.

Agoncillo still has about two weeks worth of food, water and aid packs and will need help from the provincial and national governments when supplies get depleted, he said.

While tending to the thousands of displaced residents, Reyes said he and other officials were preparing contingency plans in case Taal erupts violently.

“There is a great possibility that it will erupt,” Reyes said, citing a briefing by government volcano experts.

The Philippines lies along the Pacific "Ring of Fire,” a string of faults around the ocean basin where many of the world’s earthquakes and volcanic eruptions occur. (AP)