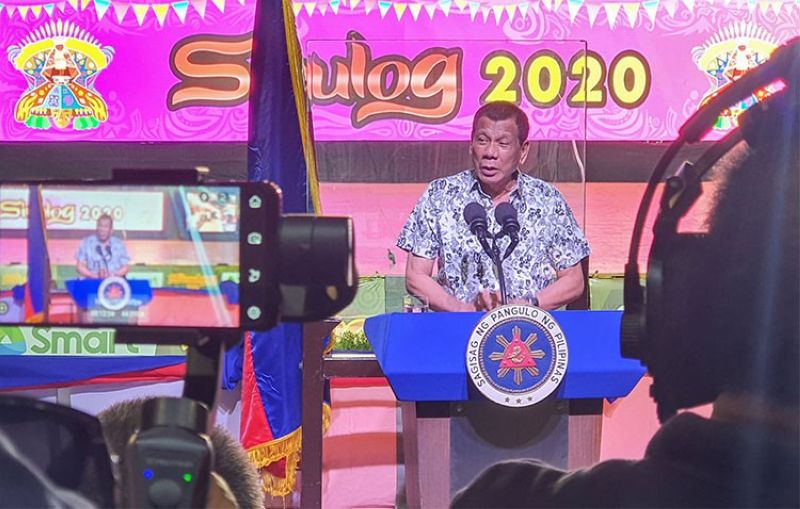 PRESIDENT Rodrigo Duterte promised on Sunday, Jan. 19, 2020, that he will help Cebuanos address the “horrendous” traffic in the metro by finding a source of fund for a traffic solution project.

Duterte made the commitment during his speech at the Cebu City Sports Center (CCSC) Sunday night, as he dropped by to watch Gov. Gwendolyn Garcia perform with the Siloy Festival of Alcoy, a guest contingent in the Sinulog Grand Parade, and the contingent from Barangay Basak San Nicolas, more popularly known as Lumad Basakanon.

The President told the crowd that building a railway is the best solution to Metro Cebu’s traffic problem.

He said expanding Cebu’s roads is no longer feasible, especially since Cebu is an “old city.”

“Wala pa atong gobiyerno, naa na ang inyong dan (Cebu’s roads were already there before the government came into existence). So when it became a city, mao nang naghuot mo (that’s why the city is so crowded) ...You cannot expand it anymore even if you’ll have mass transportation. So it’s either a train, or a taas (skyway),” he said.

Duterte said he will help Cebu find funding for the project.

“We will help you find the sourcing of the road project,” he said, adding he might take out a loan from China or other countries.

Meanwhile, Duterte also warned Cebuanos against engaging in the illegal drug trade, stressing he will not hesitate to kill drug lords or anyone involved in it.

He cited the rampant drug problem in Talisay City.

“Illegal drugs are rampant in Cebu. Even more so in Talisay. All the monkey business is there. Even the deputy and directors are involved in drugs. That’s why many drug personalities in the city were killed by the chief of police,” he said in Cebuano.

Duterte said he will not allow illegal drugs to destroy the country, stressing “if you do, I will kill you...bisan pa’g Cebuano mo (even if you’re a Cebuano).”

The President then changed tact. He told spectators he showed up at the grandstand because he loves the Cebuanos.

He thanked Cebuanos for their support during the election campaign period, saying he won the presidency because of the support he got from the people of Cebu.

With 2.7 million voters, Cebu has the largest voting population among provinces in 2016.

Duterte swept the elections in the Visayas and Mindanao.

The President arrived at the CCSC around 6:30 p.m., an hour and a half late than his supposed time of arrival at 5 p.m.

A security lockdown was implemented at the CCSC starting 3 p.m. Sunday for the President’s arrival.

As of 10 a.m. about 15,000 people had gathered inside the CCSC to watch the performance of 31 Sinulog contingents from Cebu and other areas in the Visayas and Mindanao. Last year, only 27 contingents joined the grand parade.

Maj. Elisandro Quijano, CCSC ground commander, said no one could enter or leave the complex by 3 p.m. except for the contingents.

Strict security was in place at the entrance of the CCSC. People were asked to open not only their bags but also their water bottles as part of security measures.

Police personnel, members of the military and other units were also on standby in other areas in Cebu City to secure the public. (LMY, JOB, JJL)