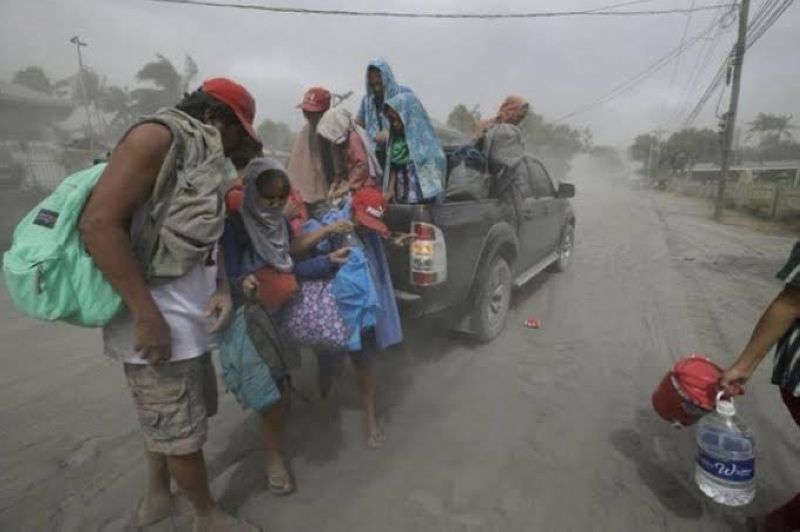 EXPLOSION OF NEEDS. The inadequacy of disaster risk reduction and management (DRRM) responses to the Taal eruption crisis should already make all public and private stakeholders anticipate how to better plan and carry out assistance that goes beyond the evacuation and rescue of communities at risk. (File Foto)

THE four-hour window opened by Agoncillo town Mayor Daniel Reyes on Jan. 17, 2020 let in not just residents clamoring to retrieve livestock, pets, food, and belongings left behind in the town after Taal Volcano erupted on Jan. 12.

The move drew a mixture of reactions. Some condemned the decision to let residents return to an area that falls within the 14-kilometer radius danger area when the Philippine Institute of Volcanology and Seismology (Phivolcs) has not downgraded Alert Level Four, which means that a “hazardous explosive eruption is possible within hours to days.”

The mayor’s critics also included Agoncillo residents who were unable to re-enter the town due to heavy traffic and delays caused by the processing of requirements for re-entry. The frustrated residents feared that the death of their livestock makes the survival of their family more precarious.

Reyes indirectly confirmed the state of deepening crisis and desperation gripping more than 80,000 evacuees in nearly 300 shelters: “The help they are getting now is only momentary.”

The crisis created by the Taal Volcano eruption exposes the vulnerabilities of stakeholders’ readiness in disaster risk reduction and management (DRRM), an integrated approach that ironically aims to go beyond emergency responses by considering options for “minimizing vulnerabilities and disaster risks” through “avoiding (prevention)” or “limiting (mitigation and preparedness)” the “adverse impacts of hazards” within the framework of “sustainable development,” according to the United Nations Office for Disaster Risk Reduction (UNISDR) and the United Nations Development Programme (UNDP).

Evacuation saves lives that are at risk before or during a calamity. However, the distribution of resources and coordination of relief and rehabilitation efforts are necessary to prevent evacuation from inadvertently oppressing and even endangering evacuees.

The urgency to provide beyond what public and private donors organize as emergency relief or aid for calamity survivors should alert the joint panel of the Senate and the House of Representatives on the need to allocate more for calamity funds.

As much as P4 billion was slashed from the P20-billion budget the Senate earmarked for the National Disaster Risk Reduction and Management Council (NDRRMC) in 2020, according to Sen. Panfilo Lacson.

Residents of ghost towns imposed a lockdown or voluntarily vacated after the Taal eruption have expressed needs beyond hand-to-mouth survival in the shelters. The appeals are for government to assist residents start a livelihood, transfer to a safer location, and build a home.

Apart from hunger, the illnesses affecting evacuees—hit by acute respiratory infection, hypertension, diarrhea, skin diseases, and influenza-like illnesses, not to mention trauma and depression—underscore the need for national and local governments to plan and build the appropriate structures for DRRM, such as evacuation centers and latrines.

Education Secretary Leonor Briones said that alternate shelters must be created soon for evacuees currently occupying public schools as they have displaced about 30,000 students from attending classes in the evacuee-occupied schools and meeting the required 200 class days in a school year.

Health Secretary Francisco Duque III urges another long-term solution for evacuation: latrines, more affordable than portable toilets or “portalet.” Due to inadequacy of toilets in public schools serving as shelters, he is appealing for donations of portable toilets, which cost P60,000 to purchase or P2,500 a day to rent.

Animal welfare groups and individuals have stepped in to rescue and heal animals abandoned in evacuations that prioritized people. The need to save and sustain life—both human and animal—emphasizes how the allocation and accountability of resources in DRRM remain to be vulnerabilities in the government’s efforts to respond to natural emergencies like the Taal eruption.