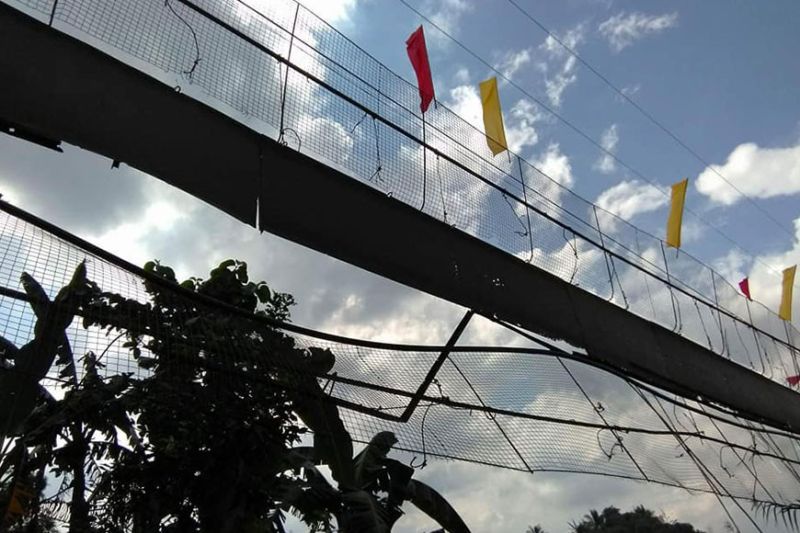 NEGROS. A portion of a hanging bridge in Barangay Camugao, Kabankalan City snaps, sending some spectators into the river below and causing injuries to eight people who were rushed to the hospital early Sunday morning, January 19, 2020. (Rolly Estopa Photo)

EIGHT persons sustained injuries and were rushed to a hospital after some cables of a portion of a hanging bridge snapped while a fluvial parade, held as part of the annual Sinulog Festival, was ongoing in Sitio Camugao, Barangay 6, Kabankalan City, Negros Occidental on Sunday, January 19.

The victims were immediately rescued by personnel of the city’s Rescue Unit and the Philippine Coast Guard.

Javellana said the hanging bridge, made of steel, is already 30 years old and only a few residents use it now.

The victims are now treated at the Lorenzo Zayco District Hospital in Kabankalan City.

Mayor Pedro Zayco said the City Government will extend all assistance to the victims, especially the minor who sustained a fracture on the arm.

Most of those who fell suffered minor injuries, Zayco said.

He said he has ordered the closure of the bridge.

A new bridge a few meters away was already inaugurated about two years ago and it could accommodate vehicles, he added.