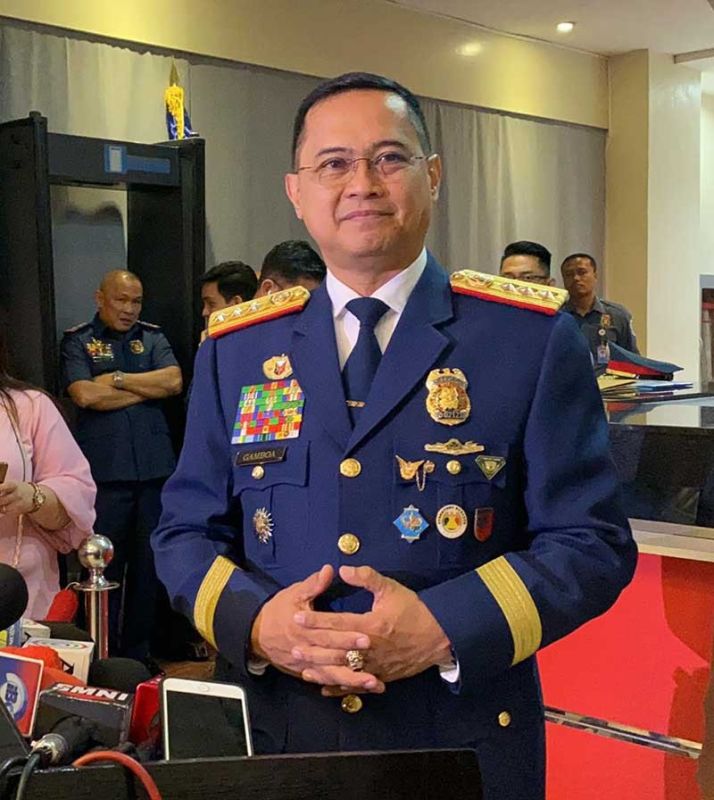 Gamboa took his oath in a simple ceremony at Camp Crame three days after President Rodrigo Duterte appointed him as the new chief PNP.

His donning of ranks will be held in Sto. Tomas, Batangas on Monday afternoon which will be led by Duterte.

Gamboa, who hails from Bukidnon, is a member of the Philippine Military Academy Sinagtala class of 1986. He is a classmate of former PNP chiefs General Ronald dela Rosa and General Oscar Albayalde.

He was also among the so-called Davao boys, or police officials assigned in Davao City under the leadership of then Mayor Duterte.

He was the spokesman of the Davao Region Police Office from December 1997 until December 2002, while he was studying law at the Ateneo de Davao University.

He passed the Bar Examination in 2004.

In 2017, he was appointed as the chief of the Directorial Staff, the fourth highest-ranking official in the PNP.

Gamboa was assigned as the PNP officer-in-charge in October 2019, after then PNP chief Albayalde relinquished his post following his implication in the anomalous anti-illegal drugs operation conducted by 13 Pampanga cops in November 2013.

In a press conference, Gamboa vowed to continue prioritizing the intensification of the campaign against illegal drugs as well as the internal cleansing.

“Essentially, all policies and plans of the PNP are in place since I assumed Command as OIC, and even before that. These policies and plans will remain to be the framework of my leadership, more so now that I am vested with more authority as Chief PNP to pursue the flagship program on internal cleansing and organizational discipline with greater vigor and efficacy,” he said.

“As a lawyer, I want every member of the PNP to be most respectful of the rule of law and everything that its stands for. There shall be no individual or unit action outside of the justice system under any circumstances. Everything shall be above-board and compliant with the requirements of due process, human rights, transparency and public accountability,” he added.

As the crime rate of the country continues to decline, Gamboa said he also aims to put a stop to crimes involving Chinese nationals.

“Matagal ko nang sinasabi that there will be constant coordination and just like any countries, we will be establishing Chinese desks and cross training on language and culture so that mas maintindihan natin why they are doing this and how they are going to do it,” he said.

“It’s happening all over the country like the government of Japan, the government of Korea has already been doing this since time before. So ito naman, we admit there is a rising threat to that; hence the need to really put up these desks. As a matter of fact there are a lot of specialized schooling and visits that have been initiated by the Chinese government of sending members of the PNP to China so that we would understand more their culture and how their syndicates do their thing in China,” Gamboa added.

Meanwhile, Gamboa said the performance evaluation of the regional directors and heads of the national support units and directorial staff is ongoing for a possible reshuffle. (SunStar Philippines)