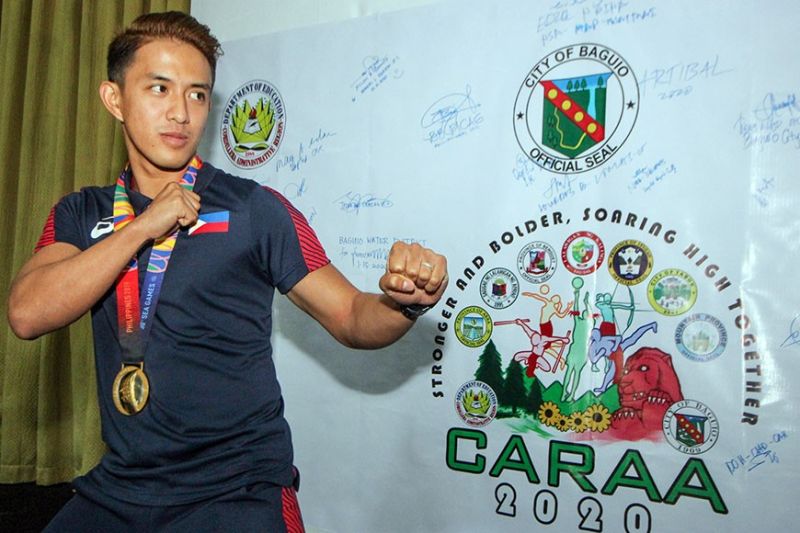 BAGUIO. SEA Games gold medalist Jeordan Dominguez is set to take a short break before plunging back to training for the 24th Asian Taekwondo Championships and the World Taekwondo Poomsae Championships this year. (Jean Nicole Cortes)

FRESH from his gold winning performance during the 30th Southeast Asian Games in 2019, Jeordan Dominguez is setting his sight on two upcoming international competitions this 2020.

The former University of Baguio student will momentarily take a rest before plunging to training for the Asian tilt slated in Lebanon set March 4 to 6,2020 at the Nouhad Naufal Indoor Sports Stadium in Beirut.

(I got an injury during the SEA Games so I need to rest first then into training again.)

Right after the Asian tilt, Dominguez will also vie for a slot in the 43th edition of the World Taekwondo Poomsae Championships on May 21 to 24 in Vejle in Denmark.

Dominguez was among the 48 athletes recently honored during the Kafagway/Kordillera International Sports Luminary Awards Podium in December 2019.

The World Taekwondo Poomsae Grand Prix bronze medalist said he remains optimistic of his chances for a podium finish in both competition after getting a much needed boost from his relatives during the SEA Games held in the country.

(Competing in front of your friends and family feels different. I feel more pressure than playing in other countries because they usually don't see it but it's an inspiration.)

But before he rejoins the Philippine team for their build up in the two international competitions, Dominguez will also join fellow Cordillera athletes who won medals during the biennial meet to grace the opening of the Cordillera Administrative Region Atheltic Association (Caraa) in February.

Some 40 medalists in the recently concluded biennial meet were invited to grace the opening of the largest sports meet in the Cordillera on February 16 hosted by Baguio City according to Department of Education-Baguio assistant superintendent Soraya Faculo.

"Our SEA Games medalists will be lighting the torch during the opening and we hope this will inspire our student athletes to strive harder during the competition," Faculo said during a press forum at the Baguio City Hall Wednesday morning, January 15.

The City Government recently approved P10 million fund for the staging of the week-long sports competition, which closes February 22.

Bulk of the funds will be used to prepare the different public schools where the athletes and sports officials will be billeted and for the preparation of the different playing venues around the city.

Baguio hosted the event for three straight years from 2015-2017, until Abra, boasting of its new rubberized track, took over in 2018 and Apayao in 2019 after its sports facilities were refurbished and the new tartan tracks installed.

At least 6,000 athletes and sports officials will be arriving in the city in the different individual and team events during the week-long regional athletic meet.