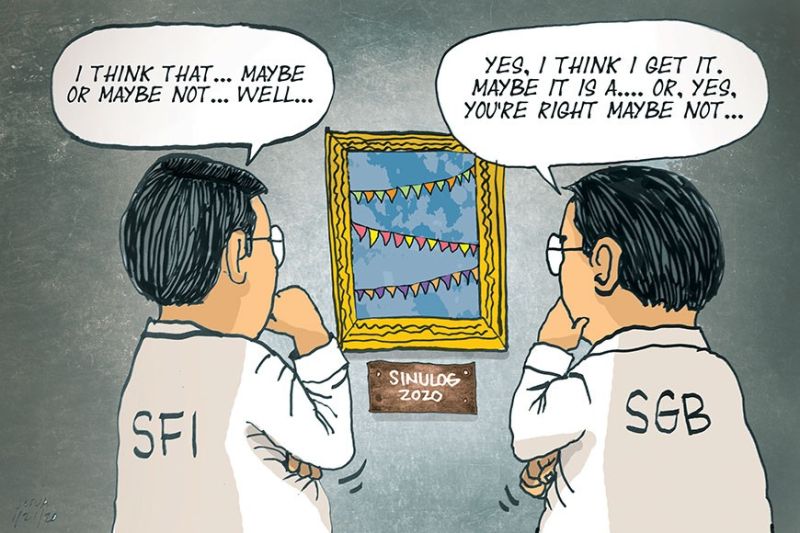 THE shift in leadership leaves many of the management decisions in this year’s Sinulog with a lot of rough edges. The old guards must be secretly gloating at the first sight of controversy the SFI faced in the final stretch of the festivities. Indeed, the sudden changes in some policies have been grossly territorial, whimsical at worst, with a feel that some invisible bodies are jostling their way around.

Post-festival, Cebu City Mayor Edgardo Labella calls for a debriefing. The Sinulog Foundation Inc. and the Sinulog Governing Board (SGB) must evaluate their acts, tackle the snags that placed them in hot seat.

What was most quizzical of all was how the SFI, via its new marketing arm Nocturnal Creative Technologies, dangled exclusivity contracts in the first place. The public wants to know the math behind it. In the first place, why narrow the field with exclusivity deals when you can expand sponsorship opportunities to infinity? The public wants to know who called the shots and the supposed wisdom behind the decisions. Were there invisible money deals in the process?

The first blast came after news of the SFI’s media coverage exclusivity deal with cable channel MyTV threw local media into an unfamiliar spot; television channels would have to link up with the cable channel’s live feed with the latter’s watermark. The second was the contract with San Miguel Foods Inc., which left local food manufacturers crying foul, saying the policy was most anti-Cebuano, hostile to local commerce.

SFI executive director Elmer “Jojo” Labella, the mayor’s brother, welcomes the planned debriefing, adding that “more heads are better than one, we could also think of a better marketing scheme.”

Well, another cliché says otherwise: “Too many cooks spoiled the broth.” In the case of the Sinulog 2020, there were just too many new cooks stirring up the cauldron.

And while it may have helped that a partner body such as the SGB existed to ensure check and balance, well, that may be most real in a fantasy world where people involved have the purest of intentions.

We can’t help but suspect that the vacuum the changing of guards created had allowed a free-for-all and thus a lot of rule changes turned out to be poor decisions, careless, whimsical.