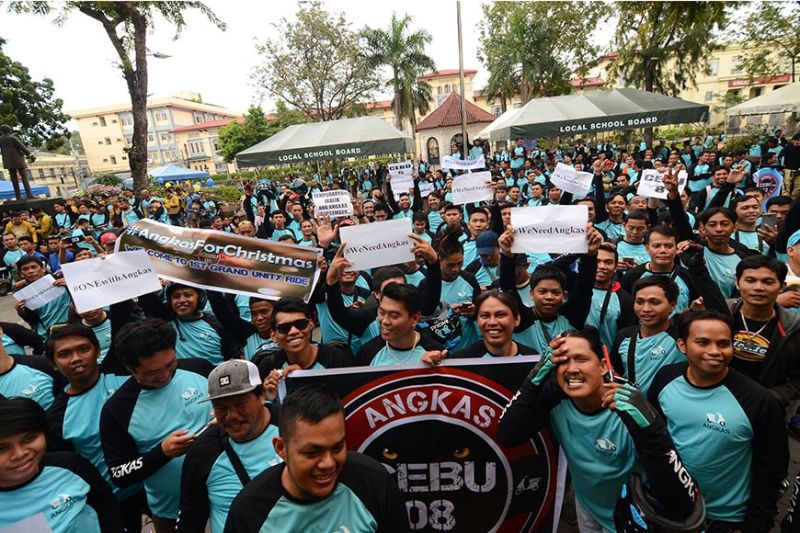 MORE than 3,000 Angkas drivers in Cebu could lose their livelihood next week after the Technical Working Group (TWG) of the Department of Transportation (DOTr) recommended to Congress the termination of the study and pilot run of motorcycle taxis nationwide two months ahead of schedule.

However, there is a possibility that they can continue their operations after Sen. Christopher “Bong” Go revealed that he plans to convince President Rodrigo Duterte and Transportation Secretary Arthur Tugade to extend the pilot study under certain conditions.

Of the three motorcycle taxi apps included in the pilot study, only Angkas operates in Cebu. The ride-hailing apps Joyride and Move It operate only in Metro Manila.

In a document issued Jan. 17, 2020, Antonio Gardiola Jr., chairman of the TWG overseeing the pilot run, recommended stopping the implementation of the study to Tugade.

The TWG conducted a six-month study from June 23 to Dec. 26, 2019 to help Congress further evaluate pending bills that seek to legalize the use of motorcycles as public utility vehicles (PUVs).

Gardiola also recommended to the Land Transportation Franchising and Regulatory Board (LTFRB) the blacklisting of Angkas from participating as a motorcycle taxi service provider in the event that the law that governs PUVs will be amended, citing Angkas’s alleged “blatantly exhibited defiance” of guidelines set by the TWG to cover the study and extended pilot run.

One of these violations is Angkas’s alleged operation outside of the identified study areas of Metro Manila and Metro Cebu.

The TWG also said Angkas did not reveal to the public that it is not a majority-owned corporation, which violates Philippine laws.

“Angkas also did not disclose to the riding public that DBDOYC, its registered corporation name, is 99 percent foreign-owned, which is in violation of Philippine laws that common carriers should be at least 60 percent owned by Filipino citizens. Records from the Securities and Exchange Commission (SEC) have revealed that DBDOYC, or Angkas, is 99.996 percent owned by Angeline Xiwen Tham, a Singaporean, with P9.8 million in subscribed shares. Tham is also listed at the SEC as president of DBDOYC,” the TWG said.

If the TWG’s recommendation is approved, more than 3,000 Angkas drivers and their operations will be considered “illegal.” They will be apprehended if caught running in the streets, said LTFRB Central Visayas Director Eduardo Montealto Jr.

Montealto said motorcycle taxis are not safe and should not be considered as PUVs. He agreed with the DOTr-TWG decision, saying it is for the safety of the riding public.

As of press time, both the LTFRB 7 and the Land Transportation Office (LTO) 7 had yet to receive word from their central offices regarding the pilot study’s termination.

But Montealto said if there is already an order, he will immediately activate the Inter-Agency Council for Traffic (IACT) which will conduct enforcement operations against motorcycle taxis.

The IACT is composed of the LTFRB, the LTO, the Philippine National Police, Armed Forces of the Philippines and the Highway Patrol Group.

Motorcycle taxi drivers across the nation, though, hope President Duterte will intervene, especially after Senator Go asked for an extension of the pilot study.

During the hearing of the Senate committee on public services on the proposed legalization of motorcycle taxis on Monday, Jan. 20, Go expressed his support for the TWG and stressed the need for the government to thoroughly study the Motorcycle Taxi Service program and uphold public interest, especially in the aspect of safety.

“I will recommend the extension of the pilot study to the President and to Secretary Art Tugade, provided that they (motorcycle taxi operators and drivers) will abide and care for the safety of the passengers,” Go said.

Go clarified that he is not “anti-business,” but he urged motorcycle taxi operators to be responsible for their customers and to ensure that their services will remain safe.

The DOTr, in a statement on its official Facebook page, said it will consider the sentiments raised by members of the Senate committee on public services and has ordered the TWG to convene to discuss these sentiments.

“The TWG shall further discuss all these on Wednesday (Jan. 22), after which a report shall be submitted to DOTr Secretary Arthur Tugade. Another meeting shall likewise be conducted on Friday (Jan. 24) with stakeholders, resource persons and the three motorcycle providers participating in the study to iron out the specifics,” the DOTr’s statement added.

Angkas is not new to legal issues.

In December 2018, Angkas had to stop its operations after the Supreme Court issued a temporary restraining order against a local court in Mandaluyong City that barred the LTFRB from interfering with Angkas’s operations.

The TWG said the move hampered the study’s implementation.

“The TWG foresees its inability to gather accurate data to enable it to render any recommendation at the end of the pilot project. For this reason, the TWG hereby invokes Section 13 of the revised guidelines and recommends that the pilot recommendation be terminated,” the TWG said in its recommendation. (HBL / JKV )