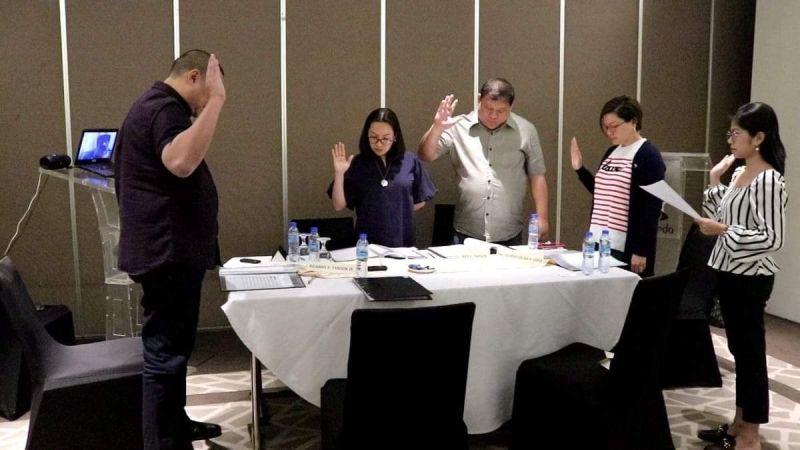 BACOLOD. The oath taking of the new members of the Board of Bachelor Express Inc. in Cagayan de Oro City. (Contributed photo)

THE Yanson 4 and the new board of directors of Bachelor Express Inc. has elected Emily Yanson as the new president of the company during their annual stockholder's meeting held on January 19 in Seda Centrio Hotel, Cagayan de Oro City.

The meeting was attended by stockholders representing 61.18 percent of the outstanding stock of the corporation, said lawyer Carlo Joaquin Narvasa in a press release Monday, January 20.

Aside from the Yanson 4, the new board of the company for year 2020 to 2021 who were elected by the shareholders were Jerina Louise Ramos and Matthew Agustine Lopez.

Also during the meeting, the shareholders resolved to ratify all the acts and transactions of the board of directors and management of the corporation under the leadership of Roy Yanson.

The shareholders also rejected the alleged unauthorized acts of Leo Rey Yanson and adopted a resolution asking that the former members of the board of directors Leo Rey and Ginnette Dumancas submit an accounting or corporate funds, properties and papers of the company for the year just passed.

When asked for reaction about this development, lawyer Norman Golez, legal counsel of the group of Leo Rey, said they also conducted the shareholders' meeting at the main office of the BEI in Bulua, Cagayan de Oro City on the same date on January 19.

"We complied all the requirements. We don't know about them and we didn't receive any notice of some kind. They don't have the authority to call for a meeting because prior to this meeting, LRY (Leo Rey Yanson) remains to be the president of the company and under the by-laws, only the president can call for and preside the annual stockholders meeting," Golez added.