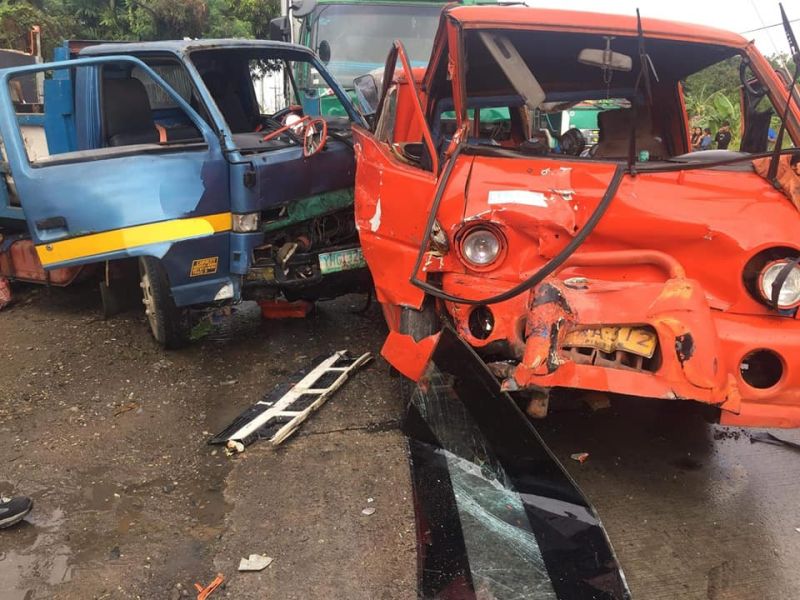 BACOLOD. A senior citizen dies, while three others are injured in a multiple collision along the highway in Barangay Mansilingan in Bacolod City Monday morning, January 20, 2020. (BCPO photo)

Also wounded were the driver of the public utility vehicle (PUV) and its two passengers.

Police Major Carmelo Nermal, chief of Police Station 7, said Jurada was about to ride on a PUV plying Bacolod-Murcia when the Wing Van truck driven by Buenaventura Lizada Jr. hit the PUV around 8:30 a.m.

The PUV also hit the Isuzu mini-dump truck parked along the road.

Nermal said the PUV and the Wing Van were traveling from Bacolod City toward Murcia.

He said Jurada died on the spot, while the driver of the PUV and its two passengers were injured and were brought to the Corazon Locsin Montelibano Memorial Regional Hospital.

He added that Lizada immediately escaped, but he voluntarily surrendered at Police Station 7 around noon.

Lizada told the police the truck lost its brakes and he hit the PUV, adding that he fled because he was afraid of being beaten up in the area.

Nermal said Lizada is detained at station's custodial facility and is facing charges for reckless imprudence resulting in homicide with multiple physical injuries and damage to property.