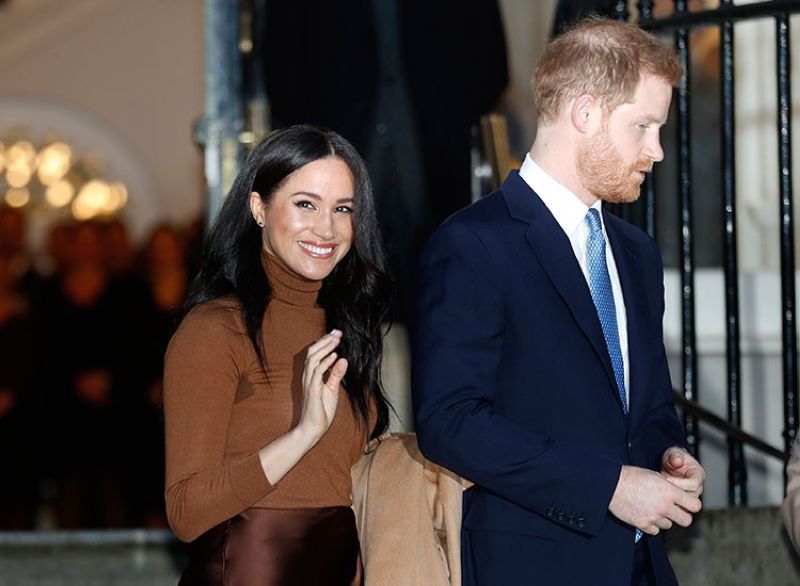 LONDON. In this January 7, 2020 file photo, Britain's Prince Harry and Meghan, Duchess of Sussex, leave after visiting Canada House in London after their recent stay in Canada. (AP)

Although the Queen has already made a statement they will always be beloved members of the family, they have been stripped off their Royal highnesses titles, taken off the sovereign fund, asked to repay for the refurbishment of Frogmore cottage, and will no longer represent the Queen officially.

I do not think the Sussexes prepared for this as they were hoping to carve out progressive roles for them within the Institution and still represent the Queen but allowed to earn private income. The Queen was having none of it-it is either IN or Out, which I think is appropriate. One cannot have your cake and eat it, too.

They say it was intense media scrutiny that drove them out. However, I think it was more than that. The media was not kind to Kate Middleton at first, even publishing naked photos of her in the tabloids. I do not think it is about color as well since Meghan was welcomed with open arms, given a free reign on her wedding, welcomed at Sandringham even if she was not married into the family yet while Kate waited 10 years until she got invited. Kate, on the other hand, had to prove herself slowly but surely. It took a decade. She knew what she was getting into and has executed her part flawlessly without calling too much fanfare to herself. She does not complain, there is no drama, no aggressive tactics to make a name for herself and follows protocols that have contributed to making the institution last as long as it has despite modern times.

Meghan in her engagement interview said she did not know much about Prince Harry and only asked was he nice? Which anyone would think as BS. Even my nanny in the Philippines knows who Prince Harry is. Meghan did ask friends to introduce her to famous British men as she likes to date someone from London. She was photographed with a magazine with Kate on the cover in 2014. In the same year as the magazine photo, Meghan also wrote about Kate on her now-defunct blog The Tig and spoke about wanting to be a princess.

She said: “Grown women seem to retain this childhood fantasy. Just look at the pomp and circumstance surrounding the royal wedding and endless conversation about Princess Kate.” She was also pictured in front of Buckingham palace and her best friend for 30 years claimed she had books of Princess Diana.

Her wedding was full of celebrities they were not even close to. And she did not invite members of her family except Doria. Apparently, it was her uncle who got her the internship at the United States embassy in Argentina but since he was no George Clooney, he did not get an invite.

Meghan was intent on modernizing and re-defining a centuries-old institution. More importantly, however, she reveled in the unlimited financial resources and took advantage of it prematurely and aggressively. She showed no restraint when it came to clothes especially branding herself as a humanitarian, champion of the poor while she spent $1m on clothes.

Amidst just coming from a climate change summit, they took private planes to visit Elton John in the South of France and to the party island Ibiza, while claiming they will only have maximum two kids as not to further contribute to the Earth's demise and continue to be a voice for climate change. The irony is difficult to fathom.

And the interview she made on the documentary on their Africa trip was not well received. There was a part where she said not many people have asked how she was. They are currently paid, and paid ridiculously well, to be working royals. She had a baby shower in New York with her A list friends and that is not enough? How many people does she want to ask how she is for her not to be sullen? She gave birth in private hospital, has a nanny, a crew of household and office staff and those are not enough while commoners have to actually toil for a living, get out of work as they cannot afford nannies, and here she is complaining. There are commoners who are fighting to put food on their table, with Brexit looming n their heads and their Duchess tearily said not many have asked if she was "okay." It is difficult to make the transition from working to being a mother but Meghan should not blame the royals for the challenges of first-time motherhood. Most do it without nannies and a plethora of staff Meghan has enjoyed. Meghan needs to grow up and, apparently, so does Harry.

Since they are now out of the Royal family business, they no longer have the royals or the media to blame for their unhappiness. I wish them well. Prince Harry is not poor after all and I think Prince Charles with his bread and butter, the Duchy of Cornwall will still continue to send them money and allowance. I think that they have to pay for their own security wherever they are and leave taxpayers out of it if they want a life of financial independence. It is but fair to use their own resources and not taxpayers' money for their own safety. These taxpayers should not be in the hook as they have no say in the ongoing drama and pursuit of happiness the Sussexes long for.