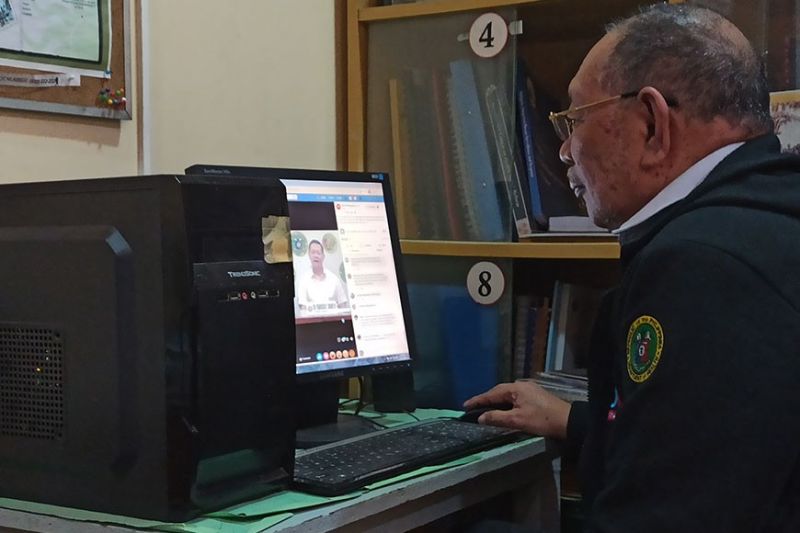 ILOILO. Dr. Jessie Glen Alonsabe, head of the Regional Epidemiology and Surveillance Unit of the Department of Health-Western Visayas, is watching the live press conference of DOH Secretary Francisco Duque regarding the China coronavirus on Tuesday, January 22, 2020. (Leo Solinap)

THE head of the Regional Epidemiology and Surveillance Unit of Department of Health (DOH)-Western Visayas clarified that they have not issued a "red alert" status, but said the region has always been on alert for flu viruses.

"We are always on alert. So since there is a case (mysterious virus), the right term to use is heightened alert," said Dr. Jessie Glen Alonsabe, Resu-Western Visayas head.

Alonsabe issued the statement in response to reports published on a local paper that said Panay Island is on red alert status after three Chinese nationals were quarantined in Kalibo for possible case of coronavirus.

He said the DOH-Western Visayas does not use the term "red alert," which he said is used only by the military and police.

The proper term is "heightened alert," which Alonsabe said is used to intensify the surveillance in air and seaports, as well as other high-risk areas.

He said specimens taken from the three quarantined Chinese nationals will be sent to the Research Institute for Tropical Medicine (RITM) in Muntinlupa City for confirmatory tests.

"We are not sure when or how long will be the RITM will release its results. The regional office here has no capacity to conduct the test and we have no choice," he said.

Alonsabe said since the flu virus is new, new reagents for the tests are only available at the RITM, the only testing center in the whole country that is capable of handling those tests.

Alonsabe said that if results of the tests yield positive for the new virus, the DOH cannot run after the three Chinese nationals, especially when they are all out of the country.

"If the results arrived and they are still here, we can hold them and admit and quarantine them to the hospital," Alonsabe said.

Alonsabe said the DOH can also do contact tracing for those people who have in contact with the three Chinese nationals, like the hotels where they stay, and doctors and nurses who took care of them.

The three Chinese nationals were allowed to go to Boracay Island after blood samples were taken from them.

"We are always on alert because the surveillance is an alarm system and we are not stopping," Alonsabe said.