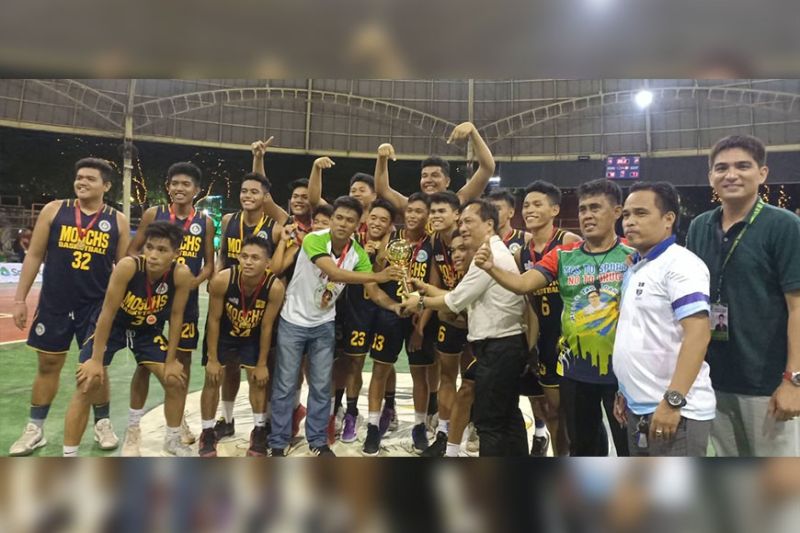 ALMOST completely squandering a 14-point lead in their first meeting, the heftier Misamis Oriental General Comprehensive High School (MOGCHS) Cavaliers made sure on Monday afternoon, January 20 there will be no another jitter in their title showdown with the undersized but fightingest Jasaan Gunners.

With Raymart Agbu, Jeric Cañete, Daniel Palle and Christian Cagas all coming with big guns, the MOGCHS Cavaliers dominated the Jasaan Gunners from Bobontugan National High School on both ends of the floor to hammer out a 78-69 victory for the first ever MisOr League crown of the Chooks-To-Go National Basketball Training Center (NBTC) Qualifier presented by SM at the jampacked Tagoloan Dome of Misamis Oriental.

Learning from their elimination round encounter, MOGCHS coach Jayson Cagmat ordered the Cavaliers to immediately go for a full-court press defense that caught the Jasaan Gunners off-guarded and the quick building of an almost 20-point deficit.

While they found it hard to contain MOGCHS' big men, the wards of Jasaan coach Alfren Alvarez also had difficulty to bring the ball down court for offense.

Then the small dribblers from Misamis Oriental town of waterfalls, that have fast become the darling of the crowd, started to catch fire.

Trailing by 15 points at 4:28 mark of the second quarter, the gutsy Rivera connected back-to-back treys to make it 22-35 and another Rivera 3-pointer ended the third quarter with Jasaan cutting down the lead to ten, 27-37.

But for every Jasaan uprising MOGCHS was always ready for counter blows.

Cañete's own back-to-back twinners saw MOGCHS in comfortable zone again at 51-37 that even the inspired play of Rivera's back-up crew in Junnel Adison, John Paul Bongalon and Dave Pensinabis could not save Jasaan from going to the mighty Cavs' pit.

The best Jasaan could do was to trim the lead back to five, 65-70 via a 5-0 blitz orchestrated by Rivera and Pensinabis with still 4:24 to go in the final fourth quarter.

A crucial drive by Cagas, a follow-up basket by Agbu coupled by a costly turnover by Jasaan off fastbreak run had virtually decided the match in the remaining two minutes and 59 seconds of play.

"Jasaan team is very dangerous. They're relatively smaller but they keep on running and hittings treys that we have to defend them hard at all cost. The final score was deceiving. It looks easy but it was really hard on our part to defeat them," acknowledged coach Cagmat.

The towering Agbu, who collected 20 points, 11 rebounds and two blocks, was adjudged best player of the NBTC-MisOr Qualifier.

Agbu enjoyed an abled support from Cañete, Palle and Cagas who scored 20, 17 and 14 points each for MOGCHS' entry to the NBTC Regional Finals set on January 30 to February 2 in Surigao City.

In the absence of explosive guard Palagbas stepped up Kim Ryan Gonzaga who led the Opol Dolphins in besting the Tagoloan Eagles with his game-high 13 points.

The home squad drew 14 and 12 points each from the backcourt tandem of Regie Timbal and Shane Quinquiño.

Through Mayor Sabio's own initiative, the champion team MOGCHS got the P10,000 top purse plus trophy with runner-up Jasaan and third-placer Opol receiving P7,000 and P5,000, respectively.

Fourth-placer Tagoloan and the rest of the eight participating teams were given P3,000 each as consolation prizes of the four-day hoopfest also supported by VIVO, PLDT, Gatorade, Darlington and Exped.