Leonardia gets honorary degrees from Royal Institution of Singapore 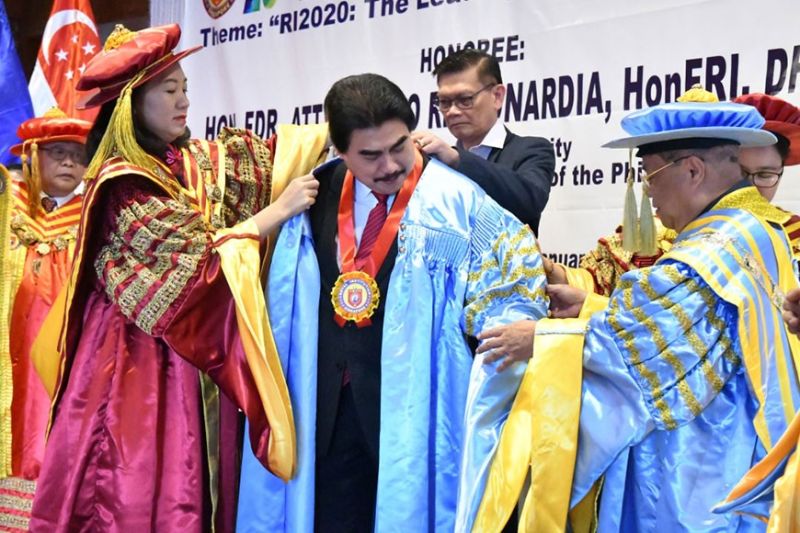 BACOLOD City Mayor Evelio Leonardia was conferred with Doctor Fellow of Royal Institution of Singapore during its 29th International Conference and Conferment Ceremony at the L’ Fisher Hotel in Bacolod Monday, January 20.

Leonardia, who is also the national president of the League of Cities of the Philippines (LCP), also received two more titles from the said organization: Honorary Fellow of the Royal Institution of Singapore, and Doctor Fellow of Royal Institute of Public Administrators of Singapore.

With Leonardia as the top honoree, a total of 45 professionals who are educators, architects, public administrators, accountants, engineers, doctors, dentists, physical and occupational therapists, ICT experts, and lawyers from various provinces and cities around the country were also conferred Doctor Fellows, Senior Fellows, Fellows, Senior Members, and Members at the same ceremony.

In his acceptance speech, Leonardia said, “This award will be a source of inspiration for me, and will be our standard by now, and we hope that we will be guided with this henceforth. What makes it gratifying is having known many of you already—it is so flattering to be among you. I am so happy that I am now part of this institution.”

Leonardia was conferred with the title “Doctor Fellow” in recognition of his “meritorious professional experience and academic achievements,” and is hereby authorized to use the designation “FDr.” before his name.

Likewise, he received the title “Honorary Fellow” in recognition of his “exemplary achievements, distinguished expertise, remarkable services, and contributions to society as a Brilliant Lawyer, Outstanding Legislator, Illustrious Public Administrator, and Transformational Leader.”

At the same time, he was conferred with of the title “Doctor Fellow of Royal Institute of Public Administrators” of Singapore for “having successfully fulfilled the requirements for membership” and in recognition of his “meritorious professional experiences and academic achievements” and is hereby authorized to use the designation of “DFRIPAr” after his name.

Royal Institution is a global professional, multidisciplinary, membership and accrediting institution that serves as a premier platform for smarter and more effective and efficient international networking and collaboration. (PR)