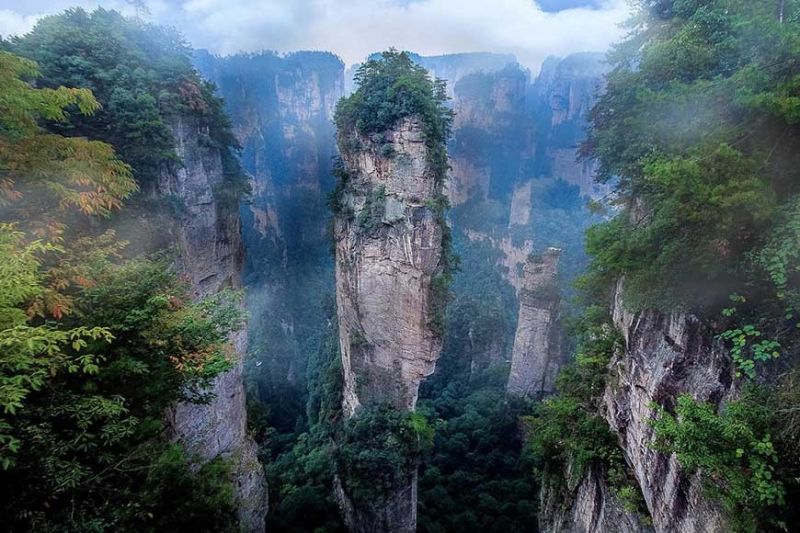 THE AVATAR HALLELUJAH MOUNTAIN. Known as the Southern Sky Column once upon a time, the mountain is a vertical quartz-sandstone pillar all of 1,080 meters high. (Photo by Nelia G. Neri) 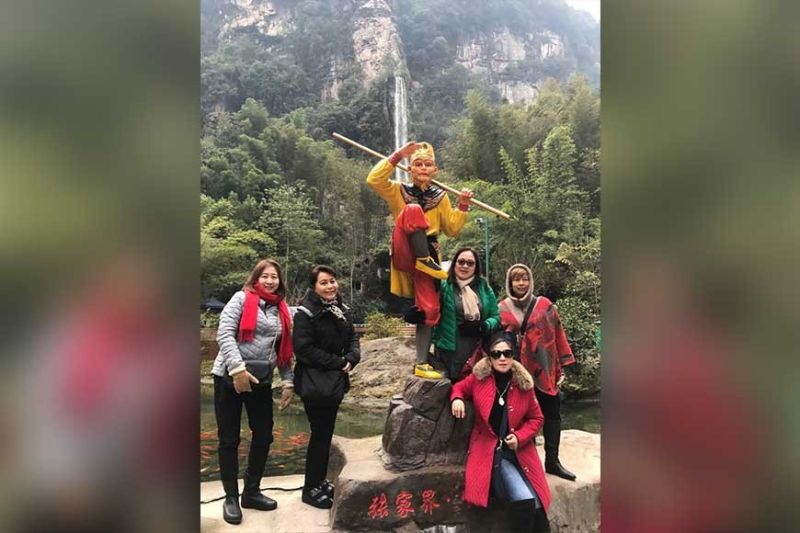 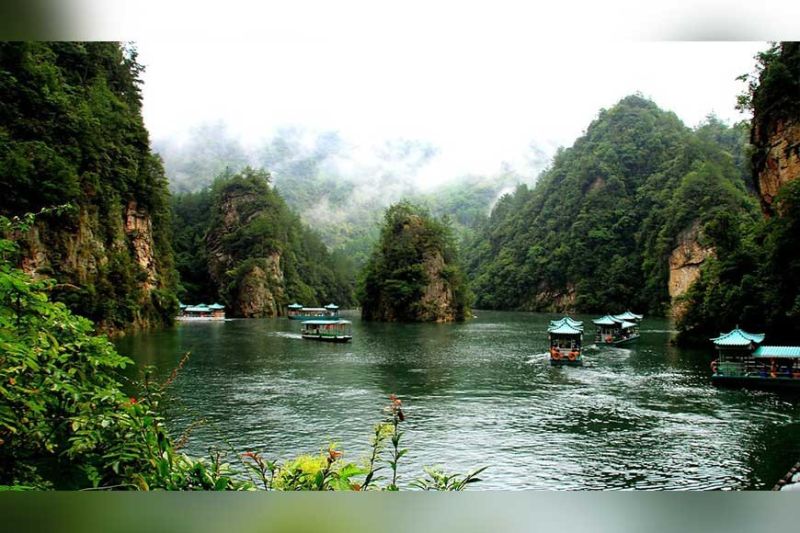 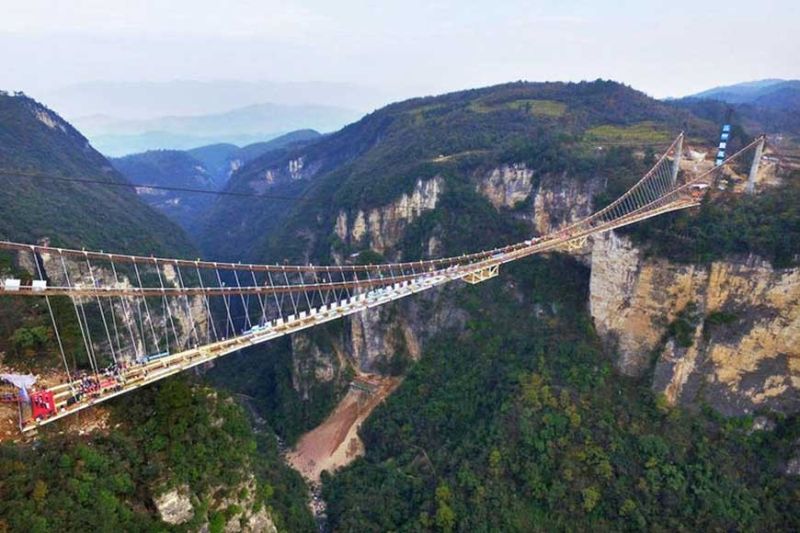 ZHANGJIAJIE GRAND CANYON GLASS BRIDGE. Constructed over a canyon between two mountain cliffs, it was once hailed as the longest and tallest glass-bottomed bridge in the world with a length of 430 meters, a width of six meters and all of 300 meters above the ground. (Photo / HighestBridge) 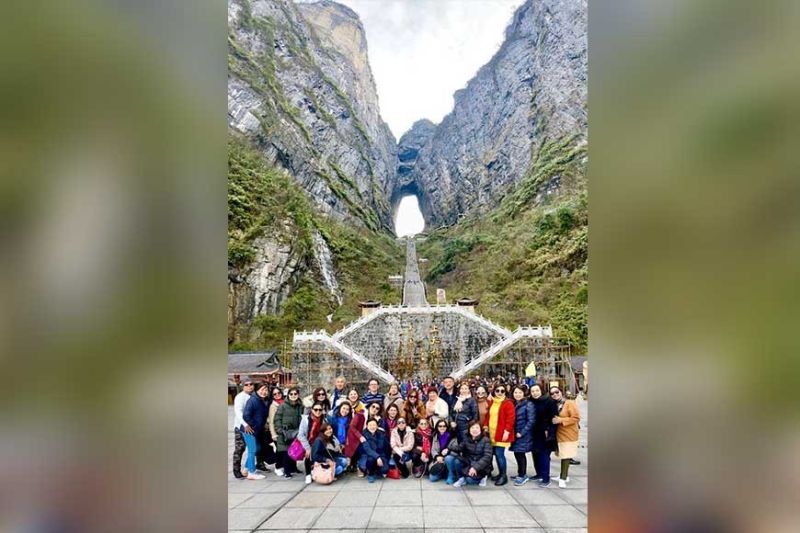 AT TIANMEN MOUNTAIN. Also called Heaven’s Gate, it is considered one of the most beautiful mountains in the world with its stunning views of vertical cliffs and deep valleys. The Cebu tour group pose at the foot of the mountain. (Photo by Nelia G. Neri) 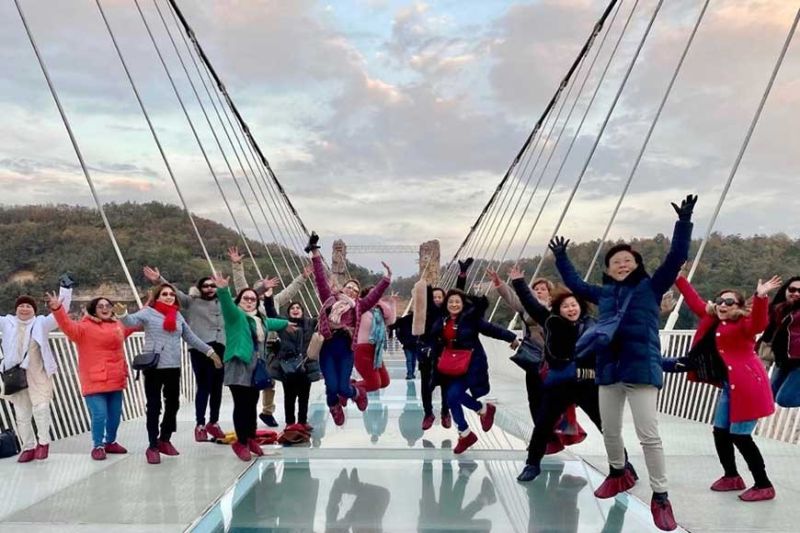 A FUN JUMP ON THE BRIDGE. Fearless faces. (Photo by Nelia G. Neri)

THE Avatar tour in China was never on my bucket list of places to visit. For one, I haven’t seen the 2009 Avatar movie so there was no curiousity on my part, and when I heard that it was mostly a mountain tour I thought it was definitely not for me and my wobbly knees. And one more thing - I wasn’t so keen to visit a place whose name (Zhangjiajie) I found difficult to pronounce. Took sometime before I finally decided to join the Avatar tour (arranged by Jerry See of China Tee) which my travel buddies were very enthusiastic about. I’m glad I allowed myself to be persuaded to join the trip of the members of the Cebu Travel and Tours Association.

Zhangjiajie in the Hunan province of China, came into prominence when the sci-fi movie Avatar (highest-grossing film for almost a decade) featured its sandstone mountains which clever and creative film editing excitingly transformed into “floating mountains” in the film. They are located at the Zhangjiajie National Forest Park which is part of the greater Wulingyuan scenic area, a Unesco World Heritage Site.

The most celebrated peak is now known as the Avatar Hallelujah Mountain. Formerly called the Southern Sky Column, the mountain is a vertical quartz-sandstone pillar all of 1,080 meters high. There are about 3,000 of these pillars, each hundreds of feet tall and covered by trees and all kinds of foliage.

Thankfully it’s no problem going up the viewing platform because there is the Bailong Elevator...”the highest, fastest, largest-loaded” outdoor elevator in the world. Going down we took the cable car.

It was cold and windy when we had our first view of the Avatar Hallelujah Mountain and its surroundings. The scene seemed surreal... cotton clouds sitting on sandstone pillars ... groups of stately peaks looking like castle turrets. It was nature at its most captivating - untouched and unsullied!

Beyond its fame as the site of the acclaimed Avatar Hallelujah Mountain, Zhangjiajie is home to more tourist attractions. There is the Baofeng Lake, an artificial fresh- water lake in the midst of natural landscapes in tree-covered mountains. We took a leisurely boat ride and found ourselves awed once again by the beauty of nature all around - mountain springs, luxuriant greeneries and cascading waterfalls. The stillness of the massive stone peaks gave us a sense of tranquility and peace.

Another mountain in the list of “must visit” places in Zhangjiajie is the Tianmen Mountain, also called Heaven’s Gate. It is considered one of the most beautiful mountains in the world with its stunning views of vertical cliffs and deep valleys. A drive up the mountain means a ride with 99 sharp curves which is definitely not for the faint-hearted like me. There’s also an option of taking a cable car in what is known as the world’s longest cable car ride taking all of 30 minutes for over seven kilomenters with the last part very steep at 37 degrees.

Definitely a major tourist draw in this part of China is the Zhangjiajie Grand Canyon Glass Bridge opened in August 2016. With a length of 430 meters, a width of six meters and all of 300 meters above the ground, it was once hailed as the longest and tallest glass-bottomed bridge in the world.

The bridge was constructed over a canyon between two mountain cliffs, and believe you me, it’s scary! How else can you describe a skywalk bridge with more than 120 glass panels displaying an endless abyss? Though apprehensive and afraid, I felt that the experience of walking on the one-of-a-kind bridge should not be missed. I took a deep breath, put on the safety “shoe covers” and made my way to the bridge. Photo op was the name of the game but I drew the line when friends suggested that I join them in a pose lying flat on the tummy on one of the glass panels and viewing the seemingly bottomless yonder.

In the city proper, we visited the Junsheng Painting Gallery where we viewed the paintings of Chinese artist Junsheng Li. His works, made of different colors of crushed stones, are unique and amazing. Other artists have learned from him and their works are the ones offered for sale at the gallery. I couldn’t resist getting one.

Oh yes, there is night life in Zhangjiajie and it meant watching two cultural shows for two successive nights. I was fascinated with the show highlighting the custom of one ethnic tribe... a would-be bride would have to cry for at least three days before the wedding because doing this would make her a more desirable wife. Can you picture a bride with swollen eyes?

The trip to the Hunan province of China was a nature trip which made me all the more grateful to our Maker for for the wonder of His creation.