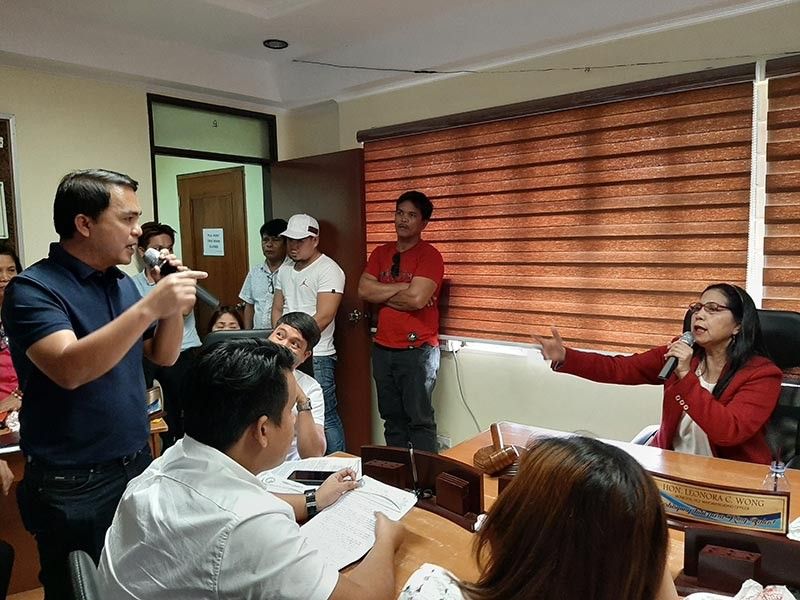 PAMPANGA. Vice Mayor Leonora Wong and Councilor Dading Santos in a heated discussion during the hearing on Tuesday, January 21, 2020 for the proposed ordinance abandoning the construction of the local government center. (Photo by Princess Clea Arcellaz)

A SPECIAL Municipal Council session held Tuesday, January 21, turned into a heated discussion after councilors were accused of allegedly “railroading” the ordinance for the movement of public funds intended for the construction of the local government center to a public hospital in San Simon town.

Vice Mayor Leonora Wong questioned the council’s alleged urgency to approve proposed Ordinance No. 2020-001 which seeks to abandon the construction of the new municipal hall and move the unexpended balance to the municipality’s general fund.

During Wong’s stint as local chief executive, she allotted P100 million for the construction of a local government center in Barangay Sto. Niño here.

Mayor Abundio “Jun” Punsalan, Jr., however, wanted to scrap the project and divert the remaining allocated funds for the construction of a public hospital, and other priority projects.

Wong alleged that the 10-member council failed to follow the protocol in approving a local ordinance such as copy of draft ordinance and necessary number of readings.

“We need to follow the right protocol because if we fail, Simonians will suffer. I was only asking for the necessary documents so we can record everything because that is what the law requires,” she said.

She added: “I don’t understand why they are pushing for the approval of the ordinance today (Tuesday). I do not even see the urgency to approve it today, especially that the money is intact and kept in a trust fund. In fact, we needed to sit on this and carefully study it so as not to commit any mistakes.”

Wong said she is not against the construction of a public hospital as it will boost health programs for Simonians.

She added that she only wanted to ensure that the local government will be following the due process to avoid putting Simonians in jeopardy.

“If majority wants a hospital, then we shall respect. Besides, public health must always be a priority of the government. I admit I am quite defensive because it is my project, but if it is what the public and of course the mayor wanted, there is no way I will disagree, as long as it passes due process,” she said.

In the right course

Majority Floor Leader Councilor Dading Santos, meanwhile, asserted the council is conscious and is compliant with due process prescribed by the local government code.

He said the ordinance was already drafted weeks ago, and passed through careful reading and analysis by all councilors.

“Our intention is to convert the funds and maximize its use for public welfare since the money is just kept lying in the trust fund since the construction of the municipal hall was suspended,” he said.

He disclosed that aside from the hospital, the funds will also be allocated for acquisition of equipment for blood chemistry, construction of training center improvement of town’s major roads, and entry and exit points, and construction of river control dikes, among others.

“We are not limiting the funds for the hospital because it is quite huge and we thought we can maximize it for the implementation of several projects under Mayor Punsalan’s priorities,” he said.

Santos assured the public that the Municipal Council will not be taking any shortcuts in crafting and approving the said ordinance for the welfare of Simonians.